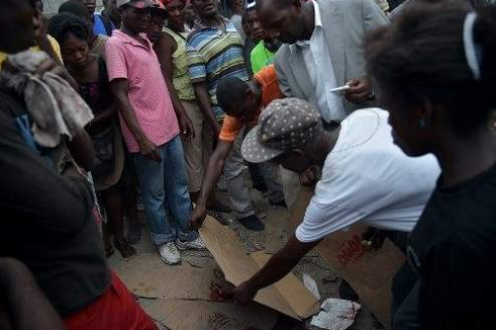 People cover the blood from the body of a man killed during clashes with security forces, as police tried to remove informal vendors in the commune of Petion Ville, in the Haitian capital Port-au-Prince, on July 13, 2017. (Photo: AFP)
PETIONVILLE, Haiti (AFP) – A man was shot dead in Haiti on Thursday afternoon during panic-inducing clashes between municipal police officers and merchants in the Port au Prince suburb of Petionville.

The victim lay on his stomach, with blood spilling onto the ground from a large facial wound, an AFP journalist saw.

Witnesses said tensions would have risen when the Petionville municipal officers attempted to remove the merchants from the street.

“City Hall has the will to evacuate us but hunger gnaws at people,” said Julien Joseph, a colleague of the victim.

“He came to try to earn a living by selling a few books, and he lost his life.”

National police officers who had been mobilised attempted to hold back hundreds of angry merchants, who refused to allow the removal of the victim’s body for fear that no investigation would be opened.

The national police did not respond to AFP requests for comment.

The departure of an ambulance with the body stirred the anger of the crowd, with the police responding with shots into the air and tear gas grenades.

The mayor of Petionville, Dominique Saint-Roc did not make a statement Thursday but told AFP he may comment Friday.

Basic law and order is threatened within the Haitian community.

We have cases of PNH officers shooting people with absolutely no reason.

This situation was created by Municipal Police, under the control of Petionville’s Mayor.

Nothing is worth a Bookseller’s life.