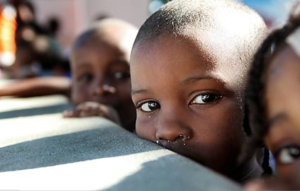 Of the thousands of Haitian nationals airlifted to America after the devastating Jan. 12 earthquake, some have an extra tie to this nation: U.S.-born children.

Unlike their countrymen who immigrated to the United States and are now eligible for temporary protected status, these parents lived with their children in Haiti, but would travel back and forth.

Some came here to give birth in better-equipped medical facilities because they anticipated complications. Others came to ensure their newborns would have all the rights and privileges of U.S. citizenship.

Then a disaster that killed an estimated 230,000 people and left 1.2 million homeless drove them from the island. While their children’s status helped get them out of Haiti soon after the quake, that alone will not help these roughly 1,300 parents and guardians stay in the United States. Advocates say most of them came to South Florida, home to the nation’s largest Haitian community.

These “mixed” families arrived on B-2 visitor visas that expire in six months. In the meantime, they may not work or apply for a range of social services, and those without financial means are struggling to get by.

“They’re in a real Catch-22 situation,” said Hiram Ruiz, director of the state Department of Children & Families’ Refugee Services. When their visas expire, the adults may have to choose between taking the children back to an unstable home, or leaving them here with friends or relatives.

Ruiz said immigration officials made a mistake giving these parents visitor visas. Instead, they should have been granted humanitarian parole or some other status that allows them to work and apply for services available to their children.

Those who advocate for immigration limits, however, say that the line has to be drawn somewhere and that this group has no right to special treatment.

Ketnie Potus, 38, an earthquake evacuee, is surviving on private donations from staff at Youth Co-Op, a refugee resettlement agency.

Five days after the earthquake, Potus said, she arrived here with nothing but the clothes on her back, her 2-year-old daughter Kernie, who is a U.S. citizen, and 25 cents.

She has been plagued with headaches ever since. Her daughter is afraid to step on an escalator because it feels like the ground is moving beneath her.

“I don’t have anything to go back to,” said Potus. Nor does she have any contacts here to help her. She spent two days at Miami International Airport before Youth Co-Op came to her rescue, and she was able to move into a small efficiency in Little Haiti.

Josette Metelus Georges’ visitor visa situation is even more complicated: She has both a 4-month-old U.S.-born daughter and a 2-year-old Haiti-born son.

After the earthquake she left her son behind with family because she thought if she tried to bring him, immigration officials would not move as quickly to transport her family. She is staying with a relative in Miami. Her son needs medical care and she wants to reunite her family in South Florida.

“Everything I had in Haiti is gone,” she said.

Ruiz said he tried unsuccessfully to raise the B-2 issue with the Department of Homeland Security days after the earthquake. “We immediately recognized the difficulties these families would face,” he said.

At Youth Co-Op, which has offices in Broward, Palm Beach and Miami Dade counties, officials said that when Haitians with visitor visas come in for counseling and employment assistance, they can only be referred to the state.

“In actuality these people are evacuees; they’re not here to visit,” said Maria Rodriguez, president of Youth Co-Op.

So far the U.S. government has not adjusted the status of the B-2 visa holders. The Department of Homeland Security will review requests to extend or modify visas, according to spokesman Clark Stevens.

But those who favor immigration restrictions say that this group is not entitled to an extension and that advocates are pushing a political agenda.

“The point is to undermine the immigration limits we have,” said Mark Krikorian, executive director of the Center for Immigration Studies in Washington, D.C. “No length of time will ever be enough.”

Some evacuees who joined friends or relatives here after the earthquake have worn out their welcome and are arriving at homeless shelters, advocates say. Various agencies are trying to track them through hospitals, churches and schools, and are referring them to attorneys willing to represent them for free.

“A couple of people have come to my office not knowing what to do,” said Phillippe “Bob” Louis Jeune, president of the Haitian Citizens United Taskforce in Lake Worth. Jeune said he has connected some families with churches that might help.

While a federal repatriation program extends loans of about $560 a month for housing and food, the aid ends after three months. Then the borrower is responsible for repayment.

Without being allowed to work, however, the B-2 visa holders do not know how they will repay the loans.

Potus, who ran a small transportation business in Haiti, said if she could only work here, she would feel more settled.

“It’s like I’m in jail when I can’t work,” she said, pacing the floor of her small apartment.

She said she cannot bring herself to think about having to return to Haiti when her visa expires in July.

“I’m thankful for the U.S. because the people here care about their citizens and they’re helping my country,” said Potus. “My house is broken, my business is gone. What would I be going back to?”

The problem is a simple one.

These folks are black.

They are not white and Cuban, otherwise they would have everything they need to survive.

No matter what anyone says, the entire handling of Haiti by everyone, including the UN, is racist.

Forget the fact that Haitians have the lowest unemployment rate of any national group in the United States.

Forget the fact that all of their families are focused upon getting their children educated to the highest level possible – not like their Black Brothers in places like Inglewatts….California.

Sorry folks, there is no equality or lack of discrimination in the States, even though we have dozens of laws that claim this factor.