Haiti National Police / Handout
Clifford Brandt
The most high-profile inmate from a Haiti jailbreak has been taken into custody, Haitian Prime Minister Laurent Lamothe tweeted Tuesday.Lamothe, who was in a special meeting with the justice minister, police chief and other security officials, sent the tweet shortly before 5:30 p.m. confirming that Clifford Brandt had been captured.

Brandt was found near the Haitian border town of Cornillon/Grand Bois, crossing the frontier into the Dominican Republic.

Local Haitian radio journalist Garry Pierre Paul Charles of ScoopFM said Brandt was captured with two others by the Dominican Army. He was later handed over to the Haitian National Police and flown by helicopter to Port-au-Prince. Police had not released details of Brandt’s capture late Tuesday.

Dominican Defense Minister Sigfrido Pared Perez, however, told a radio station that Dominican soldiers caught Brandt and two other prison escapees as they tried to cross into the country near Hondo Valle, a border town set in rugged mountains. The men were later turned over to Haitian police, he said.

After the prison break, Dominican authorities sent reinforcements to patrol along the normally porous border.

On Sunday, Haitian officials launched a nationwide search for Brandt and 328 other inmates who had escaped from a $6 million prison on the outskirts of Haiti’s capital. It was the biggest jailbreak in Haiti since a devastating earthquake shattered the National Penitentiary, sending more than 4,500 prisoners into the streets nearly five years ago.

Authorities said the raid was a well-planned attack from within the prison aimed at freeing Brandt, the son of a well-heeled businessman who confessed to his role in the October 2012 abduction of the adult son and daughter of a business rival.

Despite Brandt’s arrest, hundreds of other prisoners remain at large, many of them accused kidnappers, robbers and rapists.

Brandt’s capture came at the end of a day in which reports circulated that former Haitian President Jean-Bertrand Aristide had been ordered to appear before an investigative judge Wednesday, as part of a revived investigation into allegations of corruption, embezzlement and illicit drug trafficking during his tenure from 2001-2004.

Haitian media, quoting unnamed sources, said that Aristide and at least 30 others have been barred from leaving the country by Judge Lamarre Belizaire and that arrest warrants have been issued for some supporters.

Belizaire could not be reached for confirmation, but a government source said Aristide was served to appear in court.

Mario Joseph, Aristide’s Haiti lawyer, denied that the former president was served. And both he and Aristide’s U.S. lawyer Ira Kurzban said no formal notice of a travel ban had been imposed. The ramblings, they said, are politically motivated.

“It is solely motivated by the upcoming potential elections in Haiti and, like all other allegations against President Aristide, has no basis in fact or reality,‎” Kurzban said.

Joseph said the reports are aimed at distracting the public from Brandt’s “organized” release from jail.

“President Aristide has not received any mandate,” Joseph said. “After Brandt’s planned freedom from prison, they are looking for anything that makes noise and distracts people from the real issues.”

________________________________________________
COMMENT: HAITIAN-TRUTH,ORG
The Miami Herald has an article, focused upon Brandt as the key to the escape.
He was captured, with 2 other prisoners, wandering in a remote area of the Dominican/Haitian border.
If Brandt was part of a well-planned escape, he would have been whisked away, in a vehicle, and hidden in a house – probably in Petion-Ville – where he could have stayed for months without being caught.
In fact, he was just a person who took advantage of a situation and walked away, as Aristide’s people escaped.
Will be interesting to hear what the other two prisoners – caught with Brandt – have to say.
The government handling of this situation has been disastrous.
Justice Minister Sanon is a disgrace. 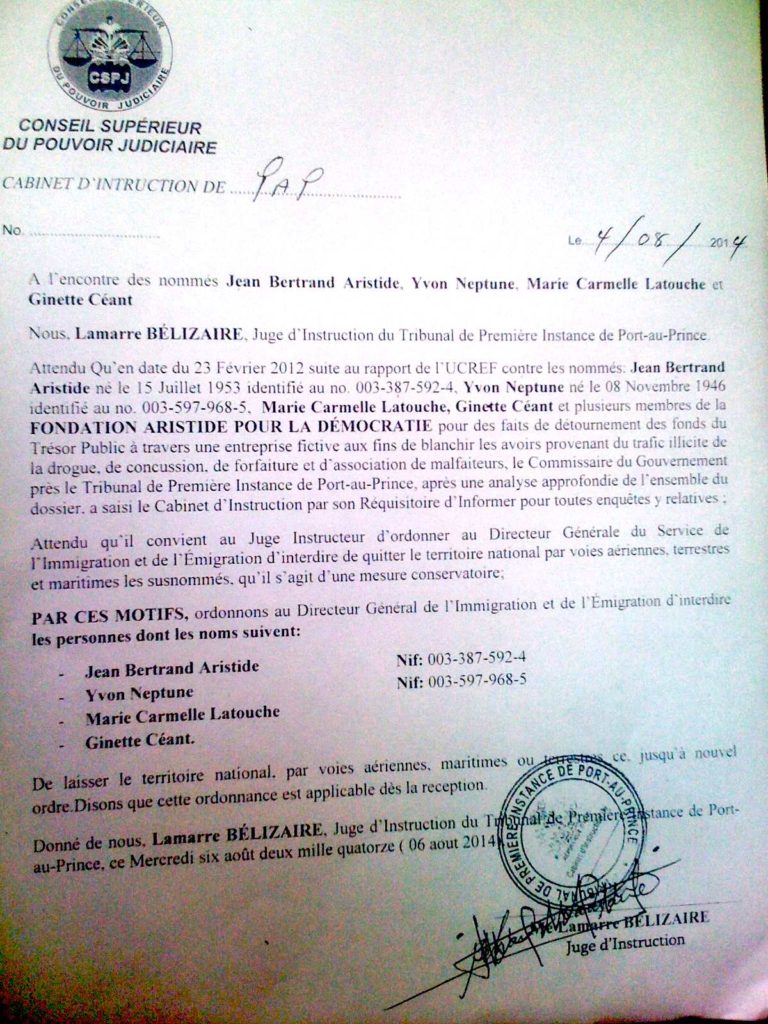 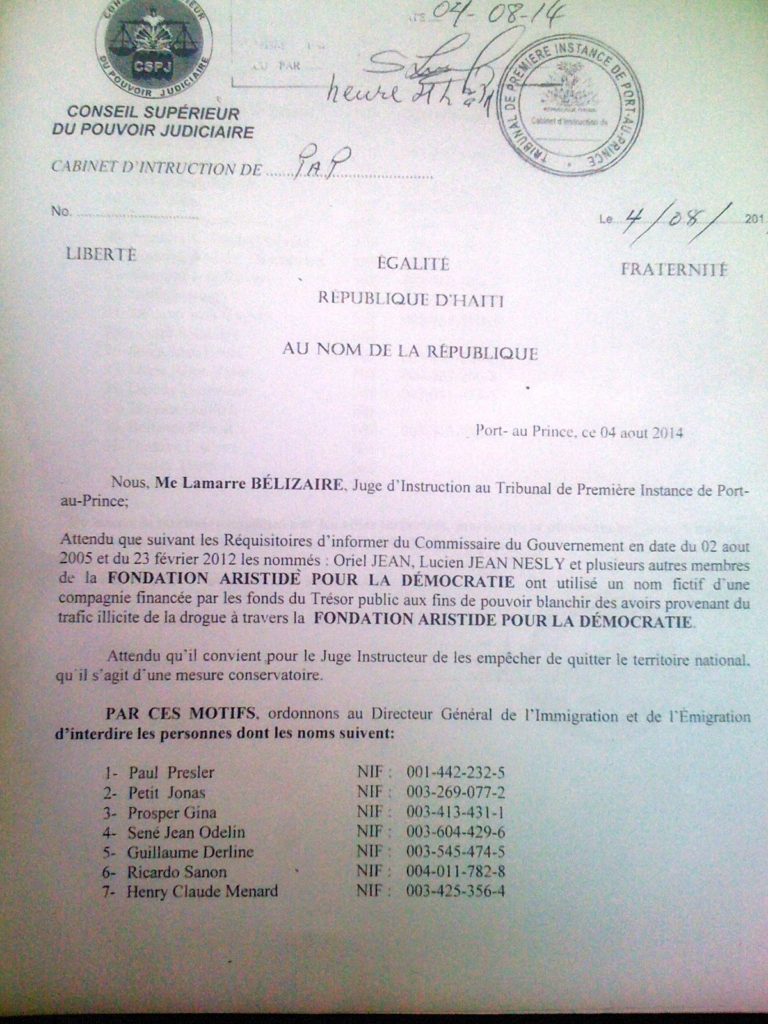 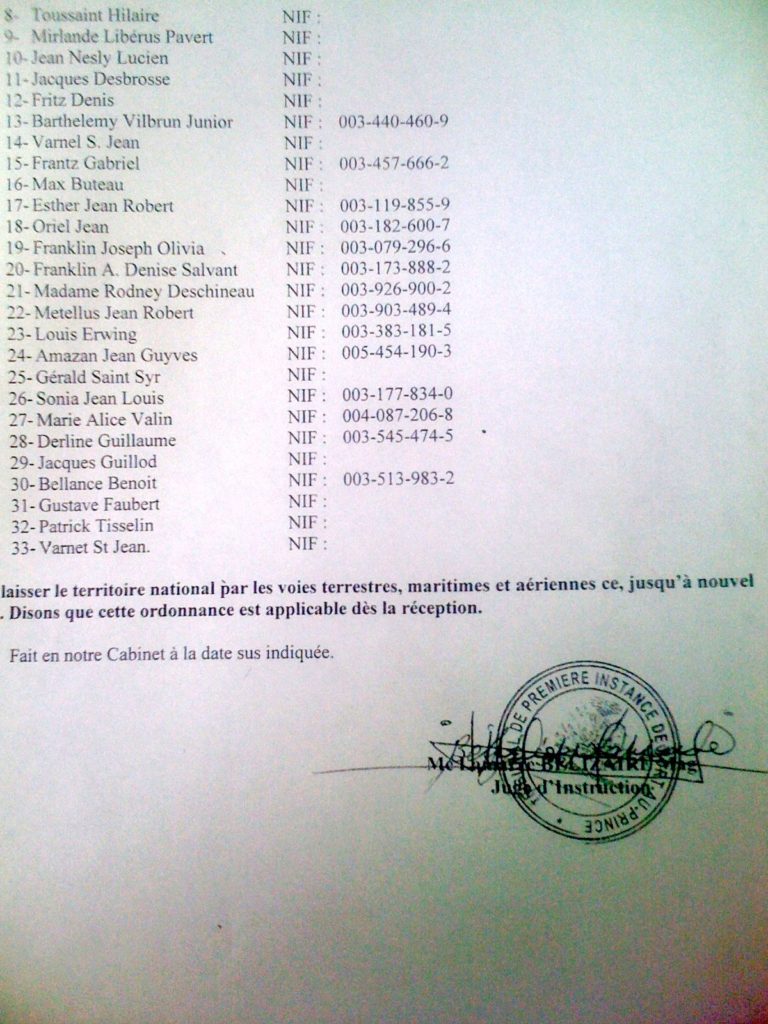