Under the warm midday sun that lit the city of Jacmel on Sunday, a colorful procession of spectacular masks and costumes took over the streets of the Haiti’s arts capital.

The coastal city turned into a giant 24-hour party, which started at noon and ended the next day, setting the stage for a parade of strange and elaborate artwork.

But the event was more than just a street party. Under the theme “Change,” it sought to send a message to the world about the will of people in Haiti to develop the country. The artistic creations expressed the joys, frustrations and hopes of the population.

“It is one of a kind it’s like not any other carnival people will see in the world,” said Lee Rainboth, 33, who runs the newly renovated art centre of Jacmel, a space that stopped functioning for a few years after the 2010 earthquake killed its former manager and damaged the building itself. It is now slowly being renovated and expanded, and has become the vibrant hub for artists who go there to exchange ideas, support and inspire each other. 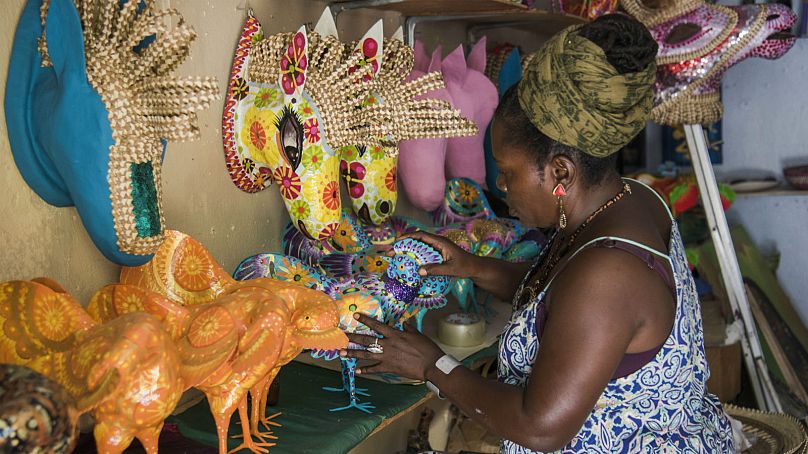 The carnival is a huge occasion in Jacmel, as it gives artists in the city and its surrounding areas the chance to come together to show off their Haitian identity, and denounce slavery and inequality in the poorest country in the Western Hemisphere.

The Haitian identity finds its roots in a successful slave rebellion and independence from France in the 19th century. It’s an identity that the people of Haiti cannot dissociate from freedom and resistance and the country’s exceptional resilience to the political instability and natural disasters that have struck countless times.

In the days leading up to the carnival, dozens of artists worked tirelessly to finish their pieces on time. Many worked in studios in downtown Jacmel, where pioneering papier-mâché artist Simonis Lionel was based as he earned worldwide acclaim for his pieces some three decades ago.

It takes a lot of money and long weeks of intense work to make the elaborate masks and costumes. Some artists get funding from the Haitian government, while others, who aren’t yet known, have to find ways to borrow money to participate with the hope of selling their art to tourists and getting recognition outside of Haiti.

“There is some money from the government and the Ministry of Culture, but to access that money, you have to know the right people,” said Rainboth of the art centre. “It’s not available for everybody and it is difficult for many artists to get access to it.”

Fanel Saint Hilaire, 37, a father of three, hopes to make enough of a splash at this year’s carnival to make a living through his art.

This year, with the help of 12 other artisans, Hilaire worked for two months on several creations including a tractor, which echoes the politics of newly-elected President Jovenel Moise, who has a strong agricultural background and promised to boost the country’s farming industries. 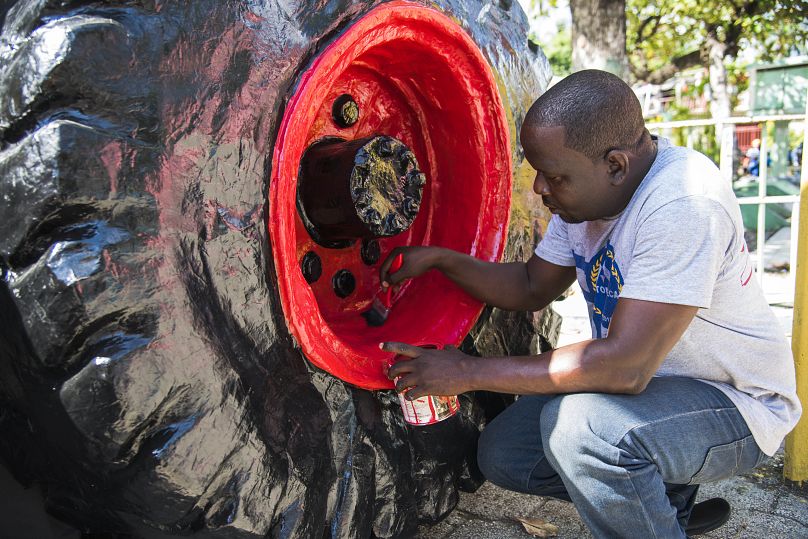 “Change cannot be made without [adequate] infrastructure,” Hilaire said. “The idea of the work I have made is to show the Haitian people’s need for development.”

While many consider Jacmel’s carnival to be well-organised and managed, times are hard for the artisans who only get the attention of the world once or twice a year. They say it is difficult for them to get the acclaim their work deserves and they wish they had more support from the Haitian government.

Raphael Salnave, a disabled 48-year-old artisan, watched the bustle along Saint Anne Street without much enthusiasm. Salnave is well-known for his carnival creations, but that doesn’t mean he’s made much money from them. This year Salnave says he had to borrow money at high interest in order to participate.

“I hope I get the money back but as of now nothing is sure,” he said.

Salnave said his creations are being copied by others and he lamented that there is no system to copyright or protect innovative creations. His friend, Charlotte Charles, 48, owns an art shop in downtown Jacmel and has been an advocate for the rights of carnival artists.

But despite any reservations, over the weekend, the city was flooded with tourists from all over the country and from abroad who wanted to experience art that celebrates the traditions of the country and the Haitian heritage.

Ernst Payen, 33, worked on five different art pieces for one month, including a carnival figure of Ayida-Weddo, a Voodoo spirit that is believed by many to have helped liberate Haiti from slavery.