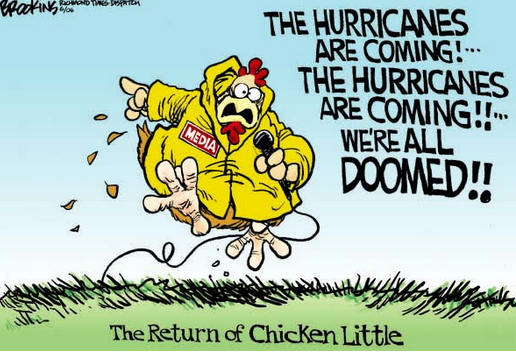 ‘May God save us all’: Mass evacuation as Hurricane Irma makes landfall in the Caribbean with 185mph winds after swelling to the size of FRANCE as Red Cross braces for ‘major humanitarian response’

By Ashley Collman For Dailymail.com and Julian Robinson for MailOnline

Mass evacuations are underway today after Hurricane Irma slammed into the Caribbean with 185mph winds as aid agencies braced for a ‘major humanitarian response’.

America’s National Hurricane Center said Irma had strengthened into a dangerous Category 5 storm as it made its first landfall in islands of northeast Caribbean on a path that could take it to the United States – causing thousands to start panic buying and preparing to evacuate.

This morning, the eye of the ‘potentially catastrophic’ hurricane – estimated to be the size of France – lashed Barbuda just hours after officials warned people to seek protection from Irma’s ‘onslaught’ in a statement that closed with: ‘May God protect us all.’

Heavy rain and howling winds from the hurricane – measured as the most powerful ever recorded in the Atlantic Ocean – also raked Antigua, sending debris flying as people huddled in their homes or government shelters. The French islands Saint-Barthelemy and Saint-Martin have also been hit this morning.

U.S. President Donald Trump declared emergencies in Florida, Puerto Rico and the U.S. Virgin Islands, and authorities in the Bahamas said they would evacuate the residents of six islands at the southern end of the island chain.

Experts say Irma is now so powerful it is registering on devices designed to detect earthquakes. Scientists picked up the background noise of winds causing trees to move and crashing ocean waves on their earthquake-detecting seismometers.

It is expected to become the second powerful storm to thrash the U.S. mainland in as many weeks after devastating Hurricane Harvey. A mandatory evacuation is under way in the Florida Keys.

In addition to Irma, Tropical Storm Jose has now formed behind it in the open Atlantic and is expected to develop into a hurricane. A third tropical storm – Katia – has also formed in the Gulf of Mexico with winds but is expected to stay offshore until Friday morning. Storm coming: The most powerful Atlantic Ocean hurricane in recorded history made its first landfall in the islands of the northeast Caribbean early Wednesday, churning along a path pointing to Puerto Rico, the Dominican Republic, Haiti and Cuba before possibly heading for Florida over the weekend An employee of the Mercure Hotel installs sand bags in a ground floor room on the Baie Nettle beach in Marigot, as part of the preparations for the arrival of Hurricane Irma on the French overseas island of Saint-Martin Employees of the Mercure Hotel fill sand bags on the Baie Nettle beach in Marigot, as part of the preparations for the arrival of Hurricane Irma Stocking  up: Residents purchase water at BJ Wholesale in preparation for Hurricane Irma on Tuesday in Miami, Florida The Red Cross this morning said it is preparing for ‘a major humanitarian response’.

‘The forecast as it stands right now is extremely worrying,’ said Walter Cotte, the agency’s Regional Director for the Americas. ‘We are anticipating major impacts on a number of islands, and we are preparing to respond to needs that may arise. We are especially worried that Irma could affect areas that have been suffering with severe rainfall in the past months.

WHEN WILL IRMA HIT?

Bahamas: Friday to this weekend

Cuba: Friday to this weekend

Southeast United States: This weekend into early next week, beginning in south Florida on Saturday

‘One of the main challenges is going to be logistical, given the isolation of some the islands. We need to ensure a reliable channel for relief efforts in the aftermath of the hurricane.’

Four other storms have had winds that strong in the overall Atlantic region, but they have been in the Caribbean Sea or the Gulf of Mexico where the usually warmer waters fuel tropical cyclones. Experts say Irma’s strength is a result of unusually warm water for that part of the Atlantic.

The center said there was a growing possibility that the storm’s effects could be felt in Florida later this week and over the weekend, though it was still too early to be sure of its future track: ‘Everyone in hurricane-prone areas should ensure that they have their hurricane plan in place.’

So far, a state of emergency has been called in the state and a mandatory evacuation is under way in the Florida Keys.  Schools there are also cancelled until further notice.

Governor Rick Scott activated 100 members of the Florida National Guard to be deployed across the state, and 7,000 more National Guard members were to report for duty on Friday when the storm could be approaching.

Pictures showed people rushing to stock up on drinking water, protective wooden boards for their windows and other supplies.

Meanwhile, tourists have had their Caribbean holiday plans thrown into chaos as Hurricane Irma forces airlines to ground or divert flights.

Antigua airport will be closed on Wednesday and San Juan airport, the busiest in Puerto Rico, has cancelled about 40 per cent of its flights in response to the hurricane.

British Airways sent an empty aircraft to the region to bring customers back early – the full flight of 326 passengers touched down in the UK on Tuesday evening.

It also cancelled a flight from the UK heading to Antigua and then on to Tobago.

Pope Francis flew out of Italy today headed for Colombia, with his plane forced to change route because of Irma. The Alitalia aircraft had been expected to fly over the U.S. territory of Puerto Rico, but will instead shift south and cross the islands of Barbados, Grenada and Trinidad, a Vatican official said.

Authorities warned that the storm could dump up to 10 inches of rain, cause landslides and flash floods and generate waves of up to 23 feet.

Government officials began evacuations and urged people to finalize all preparations as shelves emptied out across islands including Puerto Rico.

‘The decisions that we make in the next couple of hours can make the difference between life and death,’ Puerto Rico Gov. Ricardo Rossello said. ‘This is an extremely dangerous storm.’

Residents on the U.S. East Coast were urged to monitor the storm’s progress in case it should turn northward toward Florida, Georgia or the Carolinas.

‘This hurricane has the potential to be a major event for the East Coast. It also has the potential to significantly strain FEMA and other governmental resources occurring so quickly on the heels of (Hurricane) Harvey,’ Evan Myers, chief operating officer of AccuWeather, said in a statement.

Florida Governor Rick Scott declared the state of emergency for all 67 counties in the state on Monday after some forecasts showed the powerful storm could be headed for the East Coast.

‘Hurricane Irma is a major and life-threatening storm and Florida must be prepared. I have continued to be briefed by the Florida Division of Emergency Management on Hurricane Irma and current forecast models have Florida in Irma’s path – potentially impacting millions of Floridians,’ Scott said.

‘Today, given these forecasts and the intensity of this storm, I have declared a state of emergency for every county in Florida to make certain that state, federal and local governments are able to work together and make sure resources are dispersed to local communities as we get prepared for this storm.’

He also ordered the suspension of road tolls across the state and activated 100 members of the Florida National Guard to prepare for Hurricane Irma.

BILLIONAIRES’ HOMES UNDER THREAT FROM IRMA

Richard Branson is refusing to leave his 74-acre Necker Island complex in the British Virgin Islands despite the ‘extremely dangerous’ Hurricane Irma crashing into the Caribbean.

The Miami-based National Hurricane Center reported that the storm, which is expected to make landfall along the string of French islands that includes Guadeloupe later today before heading to Haiti and Florida, has now become the maximum Category 5.

This morning, the eye of the ‘potentially catastrophic’ hurricane hit Barbuda just hours after officials warned people to seek protection from Irma’s ‘onslaught’ in a statement that closed with: ‘May God protect us all.’

But Branson, writing on his blog yesterday, said he is not going to leave his island to dodge the storm. Branson said: ‘On Necker Island we have constructed really strong buildings (with hurricane blinds) that should be able to handle extreme weather pretty well, though with a Category 5 hurricane almost nothing can withstand it’ The monster hurricane, the most powerful on the five-level Saffir-Simpson scale, is about 270 miles east of the island of Antigua and is packing maximum sustained winds of 175 miles per hour.

The storm was moving towards the west at 14 miles per hour, and is expected to drop between four and eight inches of rain when it hits land.

British Airways has already cancelled a flight from Gatwick to Antigua in light of the warnings.

‘These rainfall amounts may cause life-threatening flash floods and mudslides,’ the NHC warned.

The storm is also is expected to ’cause life-threatening surf and rip current conditions.’

Branson fully acknowledged the danger of Hurricane Irma, stressing that the ‘devastation’ they can cause ‘cannot be overstated’, but said he will stay on his island regardless.

He said: ‘On Necker Island we have constructed really strong buildings (with hurricane blinds) that should be able to handle extreme weather pretty well, though with a Category 5 hurricane almost nothing can withstand it.

‘We had some lovely guests staying on Necker Island who have cut their trip short for safety reasons, and another group of guests have also postponed.

The storm was moving towards the west at 14 miles per hour, and is expected to drop between four and eight inches of rain when it hits land The businessman also took the opportunity to discuss the need to support the Paris agreement on clean energy. Pictured: Necker Island

‘I will be on Necker alongside our team, as I have been on the three times we have had hurricanes over the past 30 years.’

His main concern, he added, was for the locals on the British Virgin Islands – as well as the wildlife.

He explained: ‘I am also concerned for the wonderful wildlife of the BVI, not least on Necker and Moskito, where many flamingos, lemurs, scarlet ibis and other stunning species live.

‘Hopefully all people and animals can keep out of harm’s way in the coming days.’

Hurricanes, he said, are ‘one of the wonders of the natural world’, adding: ‘The power of the sea breaking over the cliff tops, the eerie hush when you are in the eye of the hurricane and then the roar of the winds, the lightning and the rain.’

And the businessman also took the opportunity to discuss the need to support the Paris agreement on clean energy.

He said: ‘Man-made climate change is a key factor in the increasing intensity of these hurricanes, as many experts have suggested. The damage caused by Harvey all over Texas is a tragic and costly reminder that our climate is changing and that we are not doing enough to tackle this enormous challenge.’ 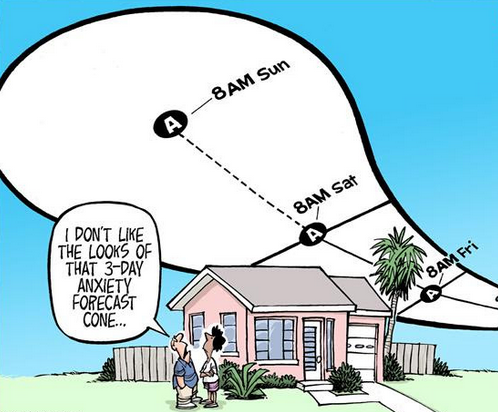