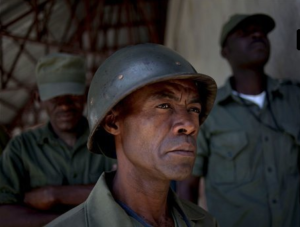 PORT-AU-PRINCE, Haiti — A rogue band of armed men pushing for revival of Haiti’s military are refusing to disband and clear out of old military bases, the leaders of the group said Tuesday, despite repeated orders from the government.

In a news conference at an army barracks just outside Haiti’s capital, several veterans of the defunct army said Haitian officials broke a promise by failing to appoint them to the helm of an interim force until the military is officially reinstated.

“We’ve decided that we’re not going to back down,” said former Sgt. Larose Aubin, who was flanked by a mix of ex-soldiers and younger recruits. “We’re not going to keep doing press conferences.”

Lubin and the other former officers made their strongest demand yet since they began recruiting men and a few women a year ago with the hope that the armed force disbanded in 1995 would be reinstated. President Michel Martelly raised their hopes further by saying as a candidate, and then in office, that he would bring back the military, a goal that has met opposition from Western embassies.

The Haitian government has repeatedly ordered the former soldiers and their followers, which number about 3,500, to vacate the old bases they seized several months ago, but it has taken no concrete action. Since then, the rogue force has paraded around the country in pickup trucks and carried weapons as if on patrol.

Last week, about 50 men in military fatigues, some of them armed, disrupted a legislative session when they showed up to speak to lawmakers about the government’s plans for them.

Their presence has become increasingly worrisome to Western diplomats, who have described the armed men as “paramilitary elements.”

Police Chief Mario Andresol said on Haitian radio on Monday that the country has only one public security force, the national police department, along with the U.N. peacekeeping mission.

On Tuesday, leaders of the band said they had met with senior officials who agreed to appoint them to the high command of an interim force until the government officially restores the army by decree. They also said they expected a response from Haitian authorities within 72 hours, but instead heard over the radio that the government ordered them to leave the bases.

“We’re telling them that the army must return,” Aubin said. “Liberty or death. Victory will be for us no matter what.”

Promese se det…….a Promise is a Debt…. according to Martelly’s campaign strategy, and there were those who believed him. This group is gradually becoming less enamored with the entire Martelly disaster, because a disaster it it.  Here is is a year since he managed to win an election that should have seen Jean Henry Ceant as the victor. Because of Preval’s fear, of a Ceant victory, Preval screwed the electoral process around to the point that the final run-off was behind two candidate…Manigat and Martelly, neither of which would won in a real ballot.

Having said that, Martelly has the President’s chair and should work to make his government work.

Instead, he has taken no real steps to get on track and insists on keeping an inner circle of incompetents, just because they are friends.  Without proper advisers, Martelly has become a media disaster, when good advice could have turned negative aspects into positive victories.

Now, it seems, Martelly has started to turn his attack dogs on Laurent Lamothe, the candidate for Prime Minister.

We are about to see Lamothe defeated, and effectively derailed,  as some of the Martelly team mounts and assault on the one guy who could save their asses.

Unfortunately, the Martelly insiders continue to plunder and steal, as the Nation slips implacably towards melt-down.

And the staggering so-called FAdH group. One must wonder about who actually controls this rabble filled with sincere people and opportunists.  An opposition group could be using the FAdH question as a means to finally see the end of Martelly.

The situation is dangerous and could explode at any moment.