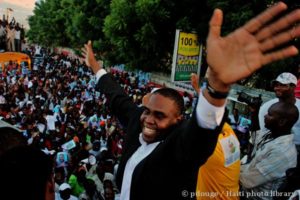 Haiti Presidential Elections:
Notary Jean-Henry Ceant
Favored By The Majority Of Displaced In Port-au-Prince Tent Cities,
New NOAH 2010 Presidential Election Poll Reveals
For Immediate Release
PORT-AU-PRINCE, Port-au-Prince Haiti/EWORLDWIRE/Nov 17, 2010 —
The results of a recent polling expedition to identify the next President of Haiti shows notary
Jean-Henry Céant favored by nearly three of four (72%) respondents.
Michel “Sweet Mickey” Martelly was also mentioned as a preferred choice of those interviewed.
The four day polling research tour – conducted from Nov. 11-14, 2010, included both focus groups and in-depth interviews. Most of the interviews were conducted in four of the largest campsites in and around the capital city where nearly 600,000 residents remain since the earthquake on January 12, 2010.
Pollster Shawnta Walcott stated: “In terms of outcomes, there will be no first- round knock-outs here. You can bet on a highly contested second-round showing. While the race is still too close to call, Céant appears to be the candidate gaining the most momentum. He’s backed by key members of former President Aristide’s Fanmi Lavalas Party; highly favored by Catholics, Protestants and Voudonists; gained the support of peasant movement leader Chavannes Jean-Baptiste – which proved to be a significant asset for René Préval in 1996; attracted crowds of over 50,000 spectators to rallies in the North; and during our field research, respondents sang and danced -celebrating hiscandidacy.
“As for other polls showing drastically different results in Port-au-Prince, I can only assume that they aren’t speaking to the folks on the ground.”
Shawnta Walcott is the former Director of Communication for Zogby International, the second largest polling firm world-wide. During the 2000 Presidential elections in Haiti, Walcott worked with National Democratic Institute (NDI) on their efforts to install electoral information centers throughout the country. In 2005 Walcott returned to Haiti to conduct the only published poll during the presidential elections showing René Préval leading by significant margins. The 2005 poll was commissioned by the National Association for the Advancement of Haitians (NOAH) and election results fell within the margin of error.
For more information on the poll, contact Shawnta Walcott at
(202) 714-7771 or e-mail shawnta@arielandethan.com.
The National Organization for the Advancement of Haitians (NOAH) was founded in 1991 as a U.S. based 501(c)(3) not-for-profit social policy corporation in response to the refugee crisis resulting from political unrest and upheaval in Haiti. NOAH serves as a national, non-partisan organization dedicated to the restoration and preservation of democracy in Haiti. NOAH is recognized as a public policy information clearinghouse and advocate for the democratization of Haiti and is consulted by the executive branch of the United States as an intermediary between the governmental and the private sectors within Haiti and abroad. Learn more at NOAHHaiti.org
(http://www.noahhaiti.org).
HTML:
http://www.eworldwire.com/view_release.php?id=none
PDF:
http://www.eworldwire.com/view_release.php?id=none
11/17/10 5:17 PM
EWORLDWIRE Press Release Distribution Submission and News Writing Service
Page 2 of 2
https://secure.eworldwire.com/client/view_release.php?id=312413
ONLINE NEWSROOM:
http://www.eworldwire.com/newsroom/316066.htm
NEWSROOM RSS FEED:
http://newsroom.eworldwire.com/xml/newsrooms/316066.xml
LOGO:
http://www.eworldwire.com/newsroom/316066.htm
CONTACT:
Shawnta Walcott
National Association for the Advancement of Haitians
Port-au-Prince, Haiti
PHONE. 301-585-1235
KEYWORDS: international relief efforts, international politics
SOURCE: National Association for the Advancement of Haitians
AVAILABLE MEDIA:
: Pollster Shawnta Walcott (size: 0.0 k)
NOAH 2010 Presidential Election Poll
http://eworldwire.com//mediauploads/walcott.jpg
: (size: 0.2 k)
NOAH 2010 Presidential Election Poll
http://eworldwire.com//mediauploads/walcott1.jpg