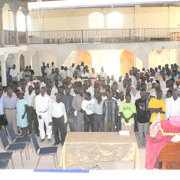 Haiti (MNN) ― Political infighting in Haiti means the new president, Michel Martelly, has been unable to make good on campaign promises made in the wake of Haiti’s 2010 devastation.

His first pick for Haiti’s Prime Minister was rejected by Parliament. In his second attempt to fill the position, Martelly chose former justice minister Bernard Gousse as his nominee. Gousse, meanwhile, has twice delayed the filing of his paperwork until July 21, and there’s word he will likely be rejected as well.

Martelly’s inability to form a new government has had a direct impact on nearly everything connected to the restoration of the disaster-ridden country.

Bright Hope International is not exempt in that. In a letter from their partner, Jephthe Lucien — director of Pignon Ministries, he writes that a full container of supplies is stuck on the docks. The container holds food, clothing, bikes and medical supplies that are desperately needed to support the ministry.

Lucien leads the work of the Jerusalem Baptist Mission. Since 1996, he has planted 42 churches with over 4,000 members and 17 Christian schools with over 2,900 students.

The Mission’s economic development programs have directly impacted hundreds of families throughout Pignon. This ministry has improved the quality of life in Pignon for thousands of people. More importantly, it has greatly strengthened the level of Christian witness opportunities in these communities.

Lucien writes that, “[sic] Customs officials fear losing their jobs by approving containers not supported by the Prime Minister’s office. Unfortunately, it is backward thinking and part of the corruption culture mentality.”

It may take a few more weeks for a new PM to be appointed, which would push the original customs approval date until the end of this month or later. Please pray for this to be resolved.
Mission Network News