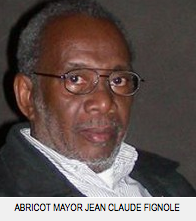 ABRICOTS, Haiti (defend.ht) – With reports coming from the federal government of its intentions to revoke more than 100 elected mayors throughout Haiti, the President of the Mayors Assocation of Grand Anse, Jean Claude Fignole, objected in an open letter to the Minister of the Interior.

In the open letter, Chairman Fignole blasted the decision by Minister of the Interior, Thierry Mayard-Paul as an abuse of power. Fignole recalled the minister requesting obligatory fees from mayors, that he would have as interim executives, but says there is no such law requiring these municipal officials to pay his ministry.

Sir Thierry Mayard-Paul
In his office

Mr. Minister,
The Association of Mayors of Grand Anse (AMAGÁ) has learned by way of press of the change in status of the mayors to that of Interim Executive Officers. Taking into account administrative and economic issues related to decentralization, AMAGÁ deplored the fact that a simple note with value of circular sovereignly decided to put an end to a process that the candidate Michel Martelly had promised to encourage as President Martelly, in the first months of his mandate, had ceased to claim.

AMAGA, facing what it sees as a dangerous precedent of slipping administrative support to the institutional drift, undertakes to produce the following remarks.

– A Government Minister, reappointed certainly but not yet re-installed by way of swearing in, you might have spared yourself the penalty to end the mandate mayors by a simple circular, while it is a fundamental public service, by worse a decree, at best by a law.

– You, with a setback of writing, abolished the function of mayor by replacing it with that of Interim Executives. This is an act of arbitrary dismissal by abolition of posts. It is a key principle in administrative law that you forget to avail yourself to avoid a misunderstanding:
The revocation authority must have been, previously, that nomination. You are reminded, Mr. Minister, your predecessor has no time, had no power to appoint mayors after they were elected?
The truth is that the mayors were entrusted with a mandate by voters who, only, have the authority to return them by electing other mayors in their place, except in special cases provided by the Constitution. So they have someone above them in the hierarchy of the public to decide their fate is the voters themselves. Your decision, Mr. Minister, is akin to a usurpation of authority, akin to an abuse of power.

– In addition, have you thought of the Code or section of the national budget that refers to the function of Interim Executive Officer? The 110 or 112? Or neither?
This function has no referent budget that would justify an obligation fee, it can only be fiction which has no excuse to be justified by any law passed by parliament which would have created it.

– Mr. Minister, have you remembered that the Constitution in its Article 63 provides conditions for the election of mayors, in 66 she devotes administrative and financial autonomy of communes?
Lack of implementing legislation clarifying and strengthening the independence, you would have to stick to a strict sense interpretation of the Basic Law to protect vested interests.
Then you would have understood that you would have no way of placing the MUNICIPAL AUTHORITY under the authority of subordinate employees in your department which, moreover, the role and function are not yet clearly defined.
I want to show that some oscillate between the authoritarianism of the former prefects and the delights of their first vocation: the denunciation.

AMAGÁ, working for the strengthening of democracy through the decentralization process, wishes, Mr. Minister, you stop a these brief remarks and that you take heart to the incriminated circular. And especially that you propose to organize the new government as soon as possible, within two months for local elections to renew the term of Mayors. If they are still in place, the fault was that?
I dare to say, we must remember, that their interventions throughout the country during various disasters, cyclones, earthquake, epidemic cholera, the collective consciousness that they have developed their responsibilities to their constituents, their sense of duty and dedication, that point predisposes them to merit, when you demean their office while pretending to keep them at their posts, “Neither this excessive honor nor this indignity.”

For the special meeting convened in AMAGA Apricot May 15, 2012.

Jean Claude Fignole
Elected Mayor of Abricots.
President of the Association of Mayors of Grand Anse

Constitution of Haiti
ARTICLE 63:
Each Communal Section is administered by a council of three (3) members elected by universal suffrage for four (4) years. They may be re-elected an indefinite number of times.
Their mode of organization and operation is regulated by law.

ARTICLE 66:
Communes have administrative and financial autonomy. Each Commune of the Republic is administered by a Council, known as the Municipal Council, of three (3) members elected by universal suffrage.