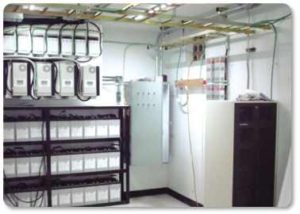 The announcement by President Michel Martelly is part of a $45 million-plus energy package that aims to introduce electricity to thousands of people in this impoverished nation who otherwise illuminate their homes by candlelight.

The program, dubbed “Give me light, give me life,” seeks to build credit for rural Haitians as they take out loans to purchase small solar kits for charging their cell phones or computers. It also aims to line streets with light posts in the countryside and repair power lines in poor neighborhoods in the capital.

“If a country wants to talk about development it’s imperative to talk about energy and electricity,” Martelly said at a news conference at a hotel in downtown Port-au-Prince.

The need for energy in Haiti is critical to the reconstruction of Haiti as the Caribbean country struggles to recover from a massive earthquake two years ago that devastated much of the southern half and initially displaced 1.5 million people.

The 40-year-old state-run Electricity of Haiti can only power 200,000 homes, Martelly said, and only 30 percent of the population in this country of 10 million has access to a power supply. Even then, most parts of Haiti only have electricity for a few hours a day, forcing many businesses and some homes to rely on generators and expensive fuel imports.

The new program will call on smaller Haitian banks to issue $30 million in loans with an interest rate of 7 percent, payable over seven years. The credit will help families purchase solar kits that will each cost between $250 and $350.

The families in question live in two of the most remote corners of the country — the Grand-Anse, the mountainous tip of the western peninsula, and the Northwest province.

In the end, the program seeks to give a power supply to 200,000 households within two years before moving onto the rest of Haiti, Martelly said.

“We feel they have less access than the rest of the country,” said Rene Jean-Jumeau, Secretary of State of Energy.

Another part of the program, budgeted for $15 million, will give the government loans so that mayors in the countryside can line 375 kilometers (233 miles) of streets with lamps. It will begin in three years.

The government project will also focus on urban areas. It will repair street lights and electric posts in 10 popular neighborhoods with $300,000 from the national treasury.

The program joins other efforts to boost energy production in Haiti.