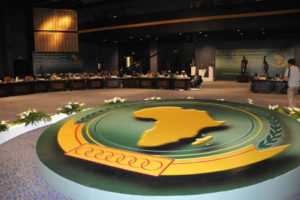 “Unite for the benefit of your people,” Bob Marley implored in “Afrika Unite.”

News reports on Monday revealed that Haiti became a member of the African Union, which previously only consisted of the Motherland’s 54 continental countries.

“It’s more than symbolic, because now there is a link between Africa and the Western Hemisphere,” said Dr. Leonard Jeffries, leader of the World African Diaspora Union.

Throughout five centuries of divisive tactics by European colonizers, Africans in the Americas have consistently been attempting to undo what the travesties of the trans-Atlantic slave trade embedded in their psyches.

Over 200 years ago, Haiti became the first Black nation in the West to liberate itself from its European oppressors, and the Haitians established themselves as a self-determining people. Now the small peninsula nation is again making unprecedented history. With Jamaica and Trinidad rumored to soon follow, supporters are optimistic that this act will become contagious.

“Haiti is the prototype. Out of the Haitian Revolution came this concept of building an independent, free African nation,” Jeffries surmises. “This means other nations in the Western Hemisphere will follow.”

In January of 2011, during an international conference in Tripoli pertaining to the African Diaspora, Libyan leader Muammar Gaddafi asked delegates, “Why shouldn’t people of Black descent living outside the African mother continent be allowed to have a referendum to decide if they want to be part of Africa or not?”

Patrick Delices, professor of Africana studies at Hunter College, states, “This is a monumental step towards a global and unified African system, in terms of developing power as it pertains to economics, politics and culture; and it’s our first step towards sovereignty.”

This past February, at a conference in Ethiopia, the African Union granted Haiti “member observer” status, a designation that which will remain valid until January 2013, when Haiti will upgrade to “associate member.” Prior to Haiti applying, no other country outside of Africa had ever made such a request.

“It’s important historically because Haiti is part of this enormous history of struggle and fight for nation-building,” Jeffries determined. “We call this great period the African Renaissance, the rebirth of the global African family.”

Africa and Haiti have a unique shared history. As one of the few Black members of the United Nations during the 1940s, Haiti pushed for the decolonization of Africa from imperialistic rule and protested against the invasion of Ethiopia by Italy.

Delices says the admission of Haiti to the African Union is a significant milestone that hopefully will “help with the Haitian-African trade and could help eradicate poverty, boosting the economy.”

Jeffries concludes, “This is a linkage that we need to have, and it will be meaningful for the future in linking up the different parts of the African world. It will put the reparations issue fair and square before the world.”

These and other issues will be discussed at the State of the Race Conference at Howard University from Nov. 14 to 18. For more information, visit ibw21.org.