Lack of supplies and damage to hospital building, power outage and strong aftershocks in Port-de-Paix after quake. 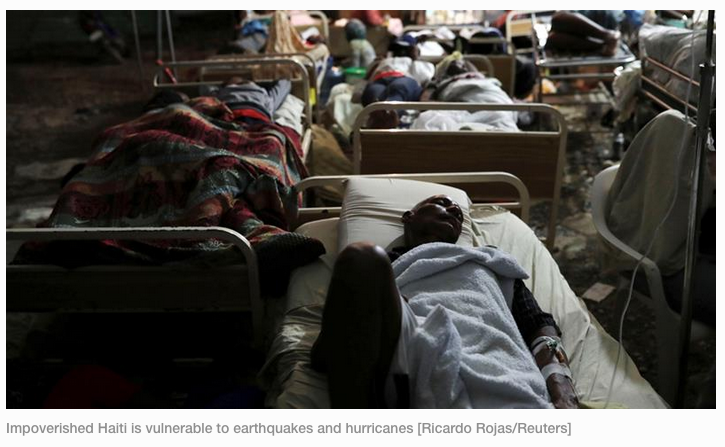 Hospitals in Haiti’s northwestern city of Port-de-Paix are labouring to cope with the fallout from an earthquakeand strong aftershocks which killed at least 12 people.

The city, which is about 219km from the capital, Port-au-Prince, was hardest hit by Saturday’s quake, which authorities say injured 188 people.

At the Immaculate Conception Hospital, doctors and nurses lack the supplies they need to treat those wounded by the magnitude 5.9 quake and efforts are further frustrated by electricity outages and damage to the hospital building.

“There was no electricity here, so we couldn’t receive the huge numbers that came last night,” Paul Miclaude, a doctor working in the emergency room, told the AFP news agency.

“It was really difficult for us to send them to another hospital. With time running out, some died here.”

According to Haitian officials, eight of the 12 victims died in Port-de-Paix.

“Clearly, we aren’t ready for such a catastrophe,” said Miclaude.

By Monday, patients were receiving drips on mattresses lined up on the ground outside the hospital.

“With all the aftershocks, we can’t really stay inside. We’re putting up tents to receive the patients,” said Polycarpe Saeely, the hospital’s medical chief. 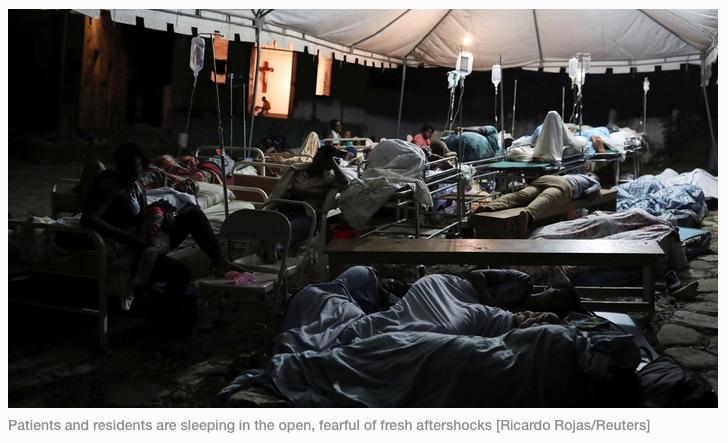 A strong magnitude-5.2 aftershock on Sunday followed the earthquake as several crates of medicine arrived from the health ministry, sending doctors and patients running from the hospital, fearful that part of the building would collapse.

“Everyone can see that we don’t have a real hospital,” said Francois Lubernsron, a 28-year-old Port-de-Praix resident. He is one of many inHaitiwhose fear is turning into anger at the government, which has failed to make major improvements to the extreme poverty suffered by many Haitians.

“This shows we have no government,” said Lubensron. “We’ve had enough of a small group privatising the country while we die. We are human beings. We have the right to live like those in all nations.”

It was felt lightly in Port-au-Prince, as well as the neighbouring Dominican Republic and nearby Cuba, where no damage was reported.

Sunday’s aftershock caused panic on the streets where emergency teams had begun providing relief and toppled buildings in several cities.

Some in Port-de-Paix chose to sleep in the open on Sunday, wary of returning to their damaged homes and fearing more aftershocks.

“I don’t feel safe even inside my house,” Gary Joseph told the Associated Press as he laid mattresses for himself and his sons under a tree. “I have to protect myself and my sons.”

Impoverished Haiti is vulnerable to earthquakes and hurricanes. Hispaniola, the island shared with the Dominican Republic, sits atop two major fault lines.

The weekend tremors were among the strongest to hit Haiti since a massive magnitude-7.0 quakestruck near Port-au-Prince in 2010, killing tens of thousands of people.