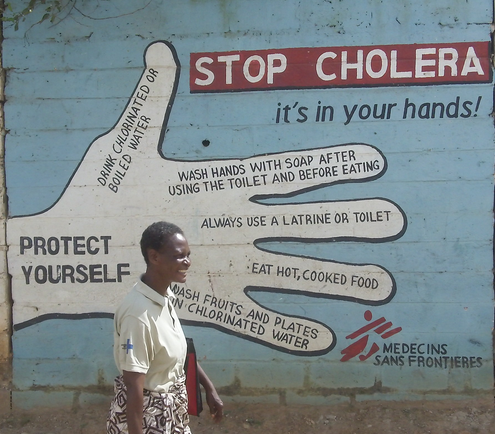 Adopting two texts without a vote this morning, the General Assembly committed to implementing the Secretary-General’s newly presented approach to cholera in Haiti, with speakers welcoming the “long-anticipated” move and its focus on the provision of material assistance to the victims of the nearly six-year-long outbreak.

By the terms of the resolution titled, “the United Nations approach to cholera in Haiti” (document A/71/L.42), the Assembly welcomed the Secretary-General’s new approach, as laid out in his recent report (document A/71/620), and called on Member States, relevant United Nations bodies and other partners to provide their full support to it. It also called on them, in particular, to intensify efforts to respond to and eliminate cholera and to address the suffering of its victims, including by providing material assistance and support to those most directly affected. In addition, it requested the Secretary-General to submit a further report on the matter at the Assembly’s resumed seventy-first session in 2017.

Introducing the text — which fell under an agenda item on “special economic assistance to individual countries or regions”, recently considered by the Assembly (see Press Release GA/11870 of 8 December) – Uruguay’s representative, speaking on behalf of the Group of Friends of Haiti, said the Secretary-General’s new approach was a comprehensive one. Describing the strategy’s twin tracks, he said the first called for an intensified and better resourced effort to respond to and reduce the incidence of cholera in Haiti, while the second sought to provide direct support to those most affected. While he would have preferred to have more time to broaden the membership’s participation in drafting the text, the co-sponsors had instead opted to present a brief, concise resolution that could garner the wide support of all delegations, he said.

Haiti’s representative, welcoming the resolution’s adoption, recalled that, during a recent visit to his country Secretary-General Ban Ki-moon had “finally and formally” acknowledged the United Nations role in the cholera outbreak and its moral responsibility to assist the victims. On 1 December, the Secretary-General had presented his new strategy to the Assembly, issuing a “genuine cry of alarm” over the outbreak that had been plaguing Haiti since 2010.

Mr. Ban had further underscored the need to work to eradicate cholera in Haiti, while extending assistance to victims, their families and communities, he said. His delegation fully aligned itself with those efforts, underscoring the need for an immediate response, as well as long-term measures, such as the provision of safe drinking water systems, sanitation and health-care facilities. In that regard, he described the new approach as “long-anticipated” and much called for, especially by the victims and their loved ones.

Also expressing support for the Secretary-General’s new approach was the representative of Thailand.

It further invited Member States and international sport organizations to continue to assist developing countries in their capacity-building efforts in sport and physical education. In addition, it encouraged the stakeholders, and in particular the organizers of mega sport events, to use and leverage such events to promote and support sport for development and peace initiatives and to strengthen existing and build new partnerships, coordinate common strategies, policies and programmes and increase coherence and synergies.

Speaking on that item, the representative of the United States said sport and physical education contributed to peace and development, as well as the empowerment of women and girls and persons with disabilities. With regard to operative paragraph 5, he expressed his delegation’s support of the focus on teaching and training, but stressed that education in the United States was primarily a national issue. Expressing further support for the text’s reference to the United Nations “Guiding Principles on Business and Human Rights” framework, he welcomed efforts to disseminate them widely in order to address the human rights impacts of major sporting events.

The General Assembly will reconvene at 10 a.m. on Monday, 19 December, to take up a number of texts submitted by its Third Committee (Social, Humanitarian and Cultural).