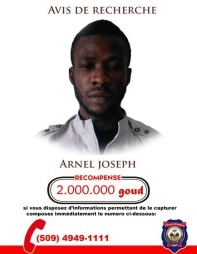 Thursday morning at Marchand Dessalines a muscular police operation was conducted to arrest Arnel Joseph the dangerous Gang Leader of the Village of Dieu, several exchanges of gunfire were reported between the police and armed individuals

Two teenagers were killed in shootings, an officer of the Departmental Maintenance Unit (UDMO) of the Saint Marc Police Station sent to support was shot in the hip, at least one other police officer was also wounded. No official record has been released of the dead and wounded in the ranks of the Arnel Gang, whose elusive Chief was seen leading armed men in the Pierrot Post area, without the police reaching to capture him.

This is the 3rd police operation to capture this dangerous criminal who fails. More than ever the PNH is determined to capture Arnel. Recall that since November 2018, the PNH has offered a bonus of 2 million Gourdes for anyone who would help him capture the dangerous Gang Leader of the Village of Dieu, without any results…

A few hours after the failure of this operation of the PNH, “Arnel” intervened by telephone on the air of a radio of the capital, furious against the police force he declared that he “entered war with the police.”