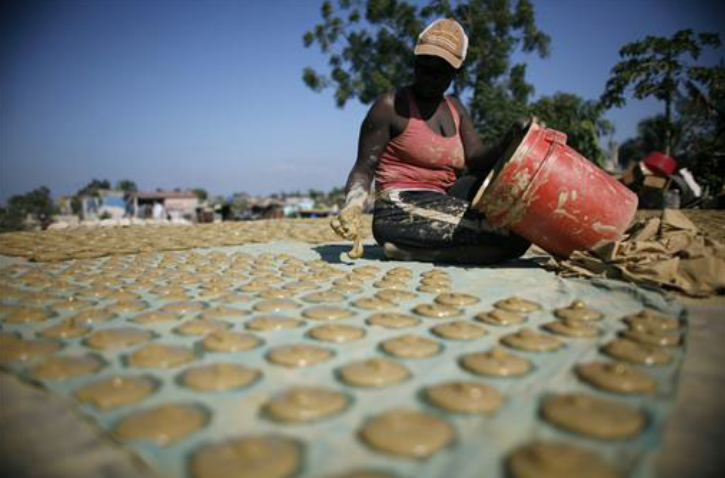 Pictures landed from Haiti the other day showing a woman crouched on the side of a street fashioning clay-like medallions with a spoon.

At first sight, the flat light-brown shapes laid out on canvas looked like pottery, but the caption read “a resident prepares mud cakes in the zone of Cite-Soleil in Port-au-Prince”. Yes, that’s right: cakes made from mud.

Reuters photographer Eduardo Munoz explains: “Only a small portion of the Haitian people eat these mud cakes. I think it is the poorest people who are eating these kind of things. It’s not all the country.”

Made with a little salt, margarine and dried yellow mud from the country’s central plateau, then baked in the sun, these “mud cakes” – or “gato te” in Creole – are a major income earner in Cite Soleil. The neighbourhood is Haiti’s poorest slum, home to 300,000 people and notorious for gang violence, which the United Nations blames for delaying food distributions after the Jan. 12 earthquake that devastated the capital.

In a country where two-thirds of the population live on less than $2 a day and one in five children is chronically malnourished, mud cakes are the cheapest way to fill hungry bellies. Costing five gourdes (13 U.S. cents) apiece, they became a staple food for the poor when global food prices hit a peak in 2008.

And since last month’s earthquake killed over 200,000 people, destroyed the homes of 1 million more and wiped out aid groups’ emergency food supplies, the dirt-based cakes remain on the menu.

“(Haitians) have been eating them for ages and it has come up again,” says Patrick McCormick, a spokesman for the U.N. Children’s Fund (UNICEF). “Food is not getting to everyone, there are still people who are not receiving enough assistance in Haiti and this is for sure.”

After any disaster, when food is short, mothers and young children are most vulnerable to disease, with death rates highest among children under-five, according to UNICEF. Malnutrition is now a big worry for aid workers in Haiti.

“We are making progress but not to an extent that we need to, by no means,” UNICEF nutrition expert Mija Ververs tells AlertNet. “We expect a rise in acute malnutrition because the rainy season is coming, children are living in overcrowded areas, and there is not enough appropriate food for them.”

By the end of last year there had been a marked drop in malnutrition, says Sarah Wilson of Christian Aid’s assessment team in Haiti. But since the quake, the situation is deteriorating because of the difficulties aid agencies face in getting food to survivors.

The country’s already poor infrastructure and roads were damaged further in the disaster, making it even harder to reach affected women and children, who are less mobile than men are.

“That’s the most poignant aspect – everybody there said they were very optimistic at Christmas,” says Wilson. “It looked like the following year would be the first year of growth in decades and now everything has gone into reverse and is much worse.”

Hungry quake survivors – particularly pregnant women and children – may have little choice but to turn to mud cakes to stave off hunger and boost their calcium intake. But experts say the dirt-based food has no real nutritional value.

Reuters photographer Munoz agrees: “A few years ago I tried one and I had three days of diarrhoea.”