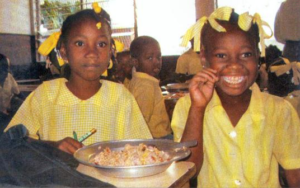 Some watched relatives die. Others escaped homes or schools as they crumbled into rubble. Nearly all are still recovering from physical or psychological trauma from the quaking earth.

But they are in some ways fortunate, children of families with enough connections and means to find a place for them to recover far from the devastation they witnessed in Haiti, starting with the jolting Jan. 12 earthquake.

Now living in the Boston area, they have access to something that has all but vanished in postquake Haiti: an education.

In the past month or so, hundreds of children from the Caribbean’s poorest nation have enrolled in local schools, challenging teachers to provide support for children struggling to learn English, to adapt to winter, and to make sense of what has become of their lives.

Boston public schools have enrolled at least 99 students from Haiti since the massive earthquake left more than 200,000 dead, some 300,000 injured, and 1 million homeless, according to government estimates. By last week, at least 98 students from Haiti had registered in Brockton, 36 students began classes in Randolph, and 11 were studying in Somerville.

All the districts, though already overcrowded, expect to receive more students in the coming months.

“These are wonderful children who are remarkably resilient, but they need special attention,’’ said Elie Jean-Louis, principal of the Charles H. Taylor Elementary School in Mattapan, where at least 25 Haitian students have enrolled since the earthquake. “They may not understand what they have been through and don’t know what emotions they are carrying inside.’’

Despite the additional financial burdens, state officials have said no money is available to help schools, some of which have had to hire Haitian Creole-speaking staff, offer additional counseling, and open new classes.

School officials said they do not check the immigration status of students and are required to enroll any child whose guardian or relative shows a driver’s license or another document that proves they live in the district. They said some of the students were born in the United States and are US citizens, while others are here on a tourist visa.

In a memo sent to schools last month, Mitchell D. Chester, commissioner of the state Elementary and Secondary Education Department, advised superintendents that “a school-aged child or youth displaced by the earthquake in Haiti and who is now residing in the USA as a doubled-up or homeless unaccompanied youth has the right to enroll immediately in the district of residence.’’

A district would follow the same procedures it would with a child displaced by a domestic natural disaster, Chester said.

Asked whether state officials would offer financial help to districts getting the most students from Haiti, JC Considine, a spokesman for Chester, said he is “not aware of any additional state financial assistance for schools that are enrolling Haitian refugees.’’

Many of those schools already have large populations of Haitian-born students, and they say they are doing their best, despite their limited resources.

In Randolph, Superintendent Richard H. Silverman said the additional students have come as the district faces a budget shortfall of more than $2 million, has cut every school program by at least 10 percent, and plans to eliminate as many as 15 teaching positions. He said each new student costs the district about $10,000.

“We don’t have sufficient funds to operate appropriately as it is, and we’re already in real danger of making significant and damaging cuts to the system,’’ Silverman said. “But we have the obligation to meet the needs of any student who lives in Randolph and comes to our doors, and we’ll do that.’’

Like other districts that have received new Haitian students, Randolph has hired additional Creole-speaking staff and has sought to assess each student’s education level and needs. They have also required the students to meet with guidance counselors, entered most of them into language and cultural immersion programs, and tried to help them make friends by providing Creole-speaking “buddies,’’ or Haitian-born students with more time in town.

“We’re trying to help these students acclimate and be successful,’’ Silverman said. “We know they have experienced real trauma. We want to help them heal.’’

At Ashfield Middle School in Brockton, principal Barbara Lovell has received at least 29 new Haitian students since the earthquake, doubling the size of some of the English immersion classes.

Lovell has had to open new classrooms in a modular building, bring special education teachers into classes, and ask teachers to work extra hours as they try to serve students with different needs.

“This is very difficult,’’ she said. “The entire school has seen an impact. It’s taxing, tiring, and exhausting for a lot of teachers. The teachers are terrific, but when you’re translating and helping students who don’t speak English, it’s hard. They’re not trained for that.’’

Among the students in her school is Oschild Alexis, 11, a sixth-grader who arrived last month after many of his friends died when the roof of their school collapsed. He was at home studying history when the roof on his house collapsed. He survived under a table. Afterward, he spent two weeks living outside as aftershocks rocked the country.

Oschild said he was adjusting to life in Brockton, where he and his older brother live with an aunt.

Oschild said he would like to go home, but it no longer exists.

Alfred Septembre, a math teacher who is Haitian, has been looking out for the new arrivals.

“Some are OK; some are not,’’ he said. “You see them put their heads down, and some you see with tears in their eyes. It’s hard. They really need help.’’

Some new students have entered parochial schools such as Trinity Catholic Academy in Brockton, which has enrolled at least five Haitian children, including Angela Osiris, 12, a seventh-grader who arrived last month and lives with an aunt.

She is coping with the loss of her grandfather, whom her mother buried in their backyard after their house collapsed; an injury to her shoulder after a cement block fell on her during the earthquake; and the sight of many people who were severely injured or died.

“I thought I was alone and that everyone was dead,’’ she said in Creole of the moments after the earthquake. “I lost every material thing.’’

She has no interest in going back, but she misses having two recesses — there’s just one at the school in Brockton — and wearing a skirt rather than pants for her school uniform.

“I don’t have a school; I don’t have a house,’’ she said. “I never want to go back. As long as there are earthquakes, then I will stay here.’’

David Abel can be reached at dabel@globe.com