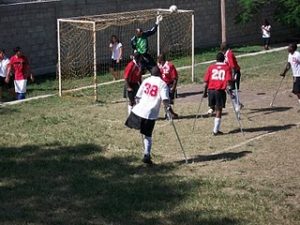 On Thursday, Sept 8th I took some of the leaders of the Haitian Association of Amputee Soccer to visit the Mission of Hope in Haiti. This organization has a large campus outside of Port-au-Prince and has offered to house and feed the team for 5 days of intensive training from Sept 13th to 17th. We were going out to see the campus for the first time and make final arrangements. Mission of Hope received us graciously and in addition to giving us free food and lodging for the camp, even is going to transport the team to a nice soccer field twice a day for training!

Friday, Sept. 9, was a big day for the Amputee soccer team.

It was the first day of fundraising in Haiti for the team, and we were anxious to see what God would do.

I decided to take Cesar, one of the goalies of the team with me to visit several businesses and present the opportunity. The first business we went to was a small store where I sometimes buy water. We explained the needs of the team to the owner and asked her for a donation of two jugs of water(worth about $3 US) and she gladly gave them. This was the first donation by a Haitian!

Next we went to a hardware store to buy the soccer goal posts for the team. The manager got so excited, he gave us a 25% discount worth about $20 US. Another customer in the store opened up his wallet and gave us about $6 US. In all, we visited about 8 businesses that day and were well-recived by most of them. Please pray as we follow up next week with them.

That afternoon the Amputee soccer team got all dressed up in Addidas uniforms donated by my High School Alma Mater, GA and played an exhibition match at Quisqueya Christian school (QCS). The students at QCS were excited to hear about the Amputee team from the captain of the Haitian National Soccer Team, Pierre Richard Bruny, who is the president of the Haitian Association of Amputee Soccer. The students then watched the game and were inspired by the effort both teams made and cheered like mad when the red team scored a goal.

After the game I handed out brochures about the team to many of the spectators, and later I got a phone call from someone who wanted to know how to contribute to the team.

The QCS student council had decided to raise funds for the team by selling hot dogs and soda and they raised $355! So during the first day of fund-raising in Haiti, the team received about $385 US in cash and discounts!

Saturday, September 11, 2010 started early when I received a phone call at 7 AM from a friend of mine who has a radio show. He called to tell me he wanted me to call him back so he could interview me on the radio via the phone about the amputee soccer team and the robbery. Even though I wasn’t quite awake, Carol said I did a good job communicating in Creole. In my closing words, I said that I forgave the gangsters who shot me, and that if they asked forgiveness of Christ, they would be forgiven by God as well and find power to change their lives.

Later that day there was a picnic at QCS, and Carol and I went over early to see if we could help. I noticed that one of the English-speaking churches in Port-au-Prince was having a men’s seminar at QCS as well. Since I knew the leaders of the conference, I asked them if I could make an announcement about the Amputee soccer team and they said yes! Not only did they say yes, but the pastor of the church wrote a personal check for $200 US, and made a pledge of $500 from his ministry!

After such an exciting morning, I enjoyed the picnic with Carol and Ricky, but also was able to make several other contacts for fund-raising.

After we ate, Ricky pulled together a boy’s soccer team to challenge the parents and teachers in a game. Unfortunately a player fell on my ankle while I was playing goalie and sprained it. It was the same leg that got shot, so right now I am back on crutches!

But I can’t wait to see what the team is going to do next week as our quest to raise enough funds to sent the Amputee soccer team to Argentina continues!