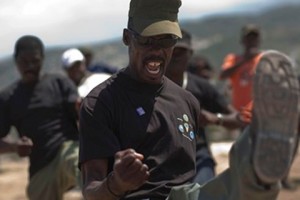 The reclusive former leader has missed many of life’s milestones since his return to Haiti 3 1/2 years ago: a relative’s funeral, a public birthday celebration, a daughter’s college orientation.

Now, as a revived criminal case against him sparks renewed interest and mounting tensions on the streets of Port-au-Prince, the populist leader is being forced back into the spotlight.

Fearing his imminent arrest, militant supporters in recent weeks clashed with U.N. peacekeepers, erected barricades of burning tires and kept vigil outside of his gated compound on the outskirts of Port-au-Prince.

The crowd of a few hundred has been a far cry from the thousands who once paralyzed the country in spontaneous demonstrations to support Aristide, first as a popular Roman Catholic priest, then as a polarizing president struggling to deal with the opposition. Despite their relatively small number, those who had camped outside the home are part of a well-organized network that has shown its ability to quickly come to the aide of one of Haiti’s most controversial figures.

Still, as supporters continue to pledge their allegiance as recently as Friday with a protest in Miami, Aristide has continued to do what he has always done since his surprise return after seven years in exile in South Africa: keep to himself.

“It doesn’t get to him. He knows that these things are being brought forward for political reasons,” said Joel Edouard “Pasha” Vorbe, a member of Aristide’s Fanmi Lavalas opposition party’s executive committee.

Driving the tension is a court order for police to bring the priest-turned-president before investigative Judge Lamarre Bélizaire — by force if necessary. Bélizaire has revived an investigation into allegations that Aristide and his supporters stole tens of millions of dollars from the Haitian treasury during his second presidency, 2001 to 2004.

The allegations were first raised about a decade ago in U.S. courts, where more than a dozen top Haiti police officers and Colombian drug traffickers were convicted as part of a U.S. government crackdown on alleged drug trafficking in the Aristide administration.

But a Miami federal grand jury looking into whether Aristide also received kickbacks from traffickers and stole money from his government and funneled it to U.S. banks failed to levy money laundering charges before the five-year statute of limitations ran out. Aristide’s lawyers have always denied any wrongdoing and question the current legal proceedings.

The Haitian inquest — similar to the work of a grand jury — is supposed to be secret. But Haitian media have been abuzz with reports of the investigation.

The Miami Herald has confirmed the existence of Bélizaire’s order, issued after Aristide failed to show up for an Aug. 13 court date. His lawyers, who went instead, say the summons wasn’t properly served and never received by the leader, whose security team includes police officers.

They have since said they’ve filed a motion with Haiti’s supreme court asking for Bélizaire’s removal on the grounds that he is politically biased and his appointment as a judge by President Michel Martelly’s administration did not follow procedure.

Under Haitian law, the case should have been put on hold, according to criminal procedure expert Frantz Gabriel Nerette of Université Quisqueya. But an unpersuaded Bélizaire has continued to question Aristide supporters, including former Prime Minister Yvon Neptune.

As Neptune testified last week, across town, reporters observed known gang leaders entering a university Aristide revived after returning to Haiti. Some in Haiti fear the visits might be part of a renewed effort to mobilize street support.

Observers say while Arisitide is publicly quiet, he is active behind the scenes. Supporters say he has been busy meeting with potential faculty as part of his effort to expand the university.

Aristide’s secluded life is a sharp contrast to that of another former president, Jean-Claude “Baby Doc” Duvalier. Like Aristide, he’s the subject of a legal inquiry on corruption and human rights allegations. But unlike him, Duvalier, who returned to Haiti two months before Aristide after 25 years in exile in France, is a public celebrity who is a frequent guest at Haiti’s best restaurants and official presidential events.

Not even the death of his mother-in-law, Carmelle Jacob Trouillot, in February in South Florida could sway Aristide to leave. He was a no-show at a 61st birthday celebration in his honor in Port-au-Prince and on a recent family trip to New York where his U.S.-educated wife arrived with their two daughters to move the eldest into college at Cornell University.

“He doesn’t want to create any kind of public attraction for anybody to say he’s preparing for a political comeback,” Vorbe said. “He knows that if he were to ever go some place, he would be overwhelmed.”

That’s what happened last year during his one public appearance — to answer a court summons in a murder investigation. Thousands swarmed his vehicle and the courthouse.

As often is the case in Byzantine Haitian politics, theories abound as to why the renewed interest in Aristide, whom critics say isn’t above the law.

• The case is an attempt to distract Haitians from authorities’ slow-going manhunt to find 268 of 329 prisoners who recently escaped from a Port-au-Prince prison.

•  Authorities are seeking to remove attention from the ongoing political struggle between Martelly and the opposition on the yet-to-be-organized overdue legislative and local elections that are no longer possible for Oct. 26.

• The case isn’t about Aristide, but about Duvalier. If Haitian authorities are forced to drop the case against Aristide, the same treatment must also be awarded to Duvalier.

• Martelly and his supporters fear Aristide is waging a political comeback as Fanmi Lavalas quietly rebuilds. The party recently announced that Aristide spokeswoman Dr. Maryse Narcisse will be its candidate in the yet-to-be-schedule 2015 presidential race.

“There is little doubt that this is a politically-charged affair,” said Robert Fatton, a longtime Haiti expert and University of Virginia political science professor. “At a time when the Martelly administration is engaged in acrimonious negotiations with the opposition and the Senate over long overdue elections, the indictment is likely to polarize further an already tense situation.”

Questioning the timing, Fatton said the allegations are nothing new; they were once the subject of four blistering reports from two investigative commissions during Haiti’s U.S.-backed 2004-2006 interim government.

“This affair will test the independence and fairness of the Haitian judicial system and whether it can withstand political interference and popular pressure,” he said.

Not so, said Gervais Charles, a Haitian lawyer, who believes Haiti’s dysfunctional judicial system lacks the credibility to judge any former president.

Once a leading actor in the opposition movement that forced Aristide’s Feb. 29, 2004, ouster from power amid a bloody revolt, Charles is now a member of his legal defense team. His presence was requested by Aristide, he said, who tried to recruit him weeks earlier to join the law faculty of his Université de la Fondation Dr. Aristide.

Instead of a suited hot-tempered bespectacled leader the world had known, Charles found “a man who was very, very relaxed.”

“In his approach, he was very disciplined and kept the conversation where he wanted to keep it,” said Charles, a former member of the coalition of 184 business associations, labor unions and other groups who demanded Aristide’s resignation and accused him of being a corrupt dictator. “He was very gracious with me, very polite and we had a long and lively conversation.

“I told him, ‘I do believe each of us had in mind the best interest of the country. But at that time, I believe I was in the right,’ ” Charles said.

Still Charles, who was briefly Duvalier’s attorney after his shocking return, and successfully defended Martelly in his post-election battle to be in the presidential runoff elections, said he’s thought about that fight against Aristide.

“I understand that some people may have suffered during the regime of Aristide, however, what I believe also is that at this juncture, I cannot put anybody out of Haitian politics,” Charles said. “What I am seeing now is not good. What I am seeing now is a regime that is spending the money of the country any way it wants, and it is a regime that is trying to put in a dynasty.”

An earlier online version said the Haitian inquest was the equivalent of a grand jury. That was an oversimplification. This version has been updated to clarify the similarities of the secret nature of the proceedings.

The Miami Herald cannot resist stretching things. They refer to “a few hundred” when the most that Aristide money has managed to generate is fewer than 150.

Vorbe suggests Aristide avoids being out in public because he would be “overwhelmed” by people, as he was prior to a court appearance many months ago. Actually, Aristide is a realist and stays home because he knows he will be “underwhelmed” as a few dozen surround him. The earlier crowds were drawn by cash payments and cash payments – today – are not worth being noted as Aristide supporters.

Aristide is not the popular figure claimed by his inner circle, and many media people.

Aristide is the past.

But he remains a very dangerous and venomous element in the ongoing scene.

Aristide was not indicted, in the States, because of American political considerations. These may have time-expired things like money laundering but murder and torture have no expiry date.

The time has come for Aristide to pay.