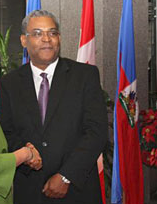 On January 12, 2010, the night of the earthquake disaster,  Haitian Prime Minister Bellerive was arrested at the Dominican/Haitian border as he tried to flee Haiti.  He had a case with $8,000,000.00 American dollars in it. This was returned to the Haitian government but, since Preval/Bellerive are the government, this is open to interpretation.

Preval was contacted and had to obtain his Prime Minister’s release the following day.

Bellerive  would probably have sought sanctuary with his boyfriend/girlfriend? Whoever it is that lives there.

Bellerive phoned Preval and told him he had found a place for Preval in the Dominican Republic and Preval joined him. This upset Dominican President Fernandez and he stepped in.  You see, Bellerive has been, and remains a member of the Dominican Secret Service – for at least 20 years.  He started to work in Minister if Interior under the CNG as a adviser,  and worked with Aristide while he was in power.  He worked for Aristide as a key figure in the Electoral Council. Always managed to be at a strategic position. He has this in common with Preval. Both men of the shadows..underground men with special agendas, not in step with those of their own country.

They planned to steal the February elections, followed by the Presidential ballot later in the year.

Preval also contacted MINUSTAH – effectively turning over control to them – with the promise they would protect him. He believed the Mob would finish him off after the quake.

In a parallel to the 2008 Hurricane Disaster relief material and funds, Preval plans to retain control of everything coming into Haiti.  In 2008 he and his friends stole everything including $198,000,000 from one account.
All humanitarian aid, Preval called all people from UNITE to get everything. Once again, Preval plans to control all donations to steal it or give assistance to UNITE’s candidates for elections. What they call non-coordination is Preval’s policy. We know he is incompetent, but he is using his incompetency in politics to organize his men. This is the same way he disorganized all of the other political parties to have his party – UNITE win everything. He wants the Americans to fail so he can name his successor.

Preval told his inner circle that he had regained control of the country, after he stood against the French/Americans/Canadians. Preval then sent his wife to many places to in an effort to gain some PR points with the foreigners and Haitians. Preval could not go himself because he was drunk.

And there is a story about Bellerive that should be told to show what kind of man he is.

Preval has this dossier. I hope the International Community does not give us this scum Bellerive as President. This is the present plan. Here is a story that can be verified via French contacts, or the businessmen at the meeting.

The French offered to send material to repair Haiti’s docks.  There was a signing meeting in Martinique. Everyone was  waiting for Minister of Public Works  Bellerive.   He stopped of in the DR to see a friend.   He was supposed to sign an agreement between France and Haiti  at 4 P.M.  At 2 P.M. he phones to say he cannot come.

Everyone waiting. The Director  of the meeting was a member of the French Secret Service. This guy called his the associate  in the Dominican Republic and said..  “I would like to know what this guy is doing. Phoned me 2 hours before the meeting  to cancel.”    minutes later the answer arrived  when the Dominican French secret service guy called to say, He is making love   with 2 Dominicans at a hotel. Do you want pictures…boys…  16 – 18 years old.”

This shows how irresponsible Bellerive is and Preval had this dossier when he appointed him Prime Minister.

The French would have sent one boatload of building material each month – free of charge. Bellerive would rather screw a couple of young boys – could be young girls – rather than help the poor people of Haiti.

All of the Haitian people are waiting for the International Community to remove the guy. Too Much, is too much!!!!

STOP PREVAL/BELLERIVE NOW BEFORE THEY DELIVER THE COUP DE  GRACE TO HAITI!!!

9 thoughts on “NEWS FLASH-Haitian Prime Minister Bellerive was arrested at the Dominican/Haitian border as he tried to flee Haiti.”