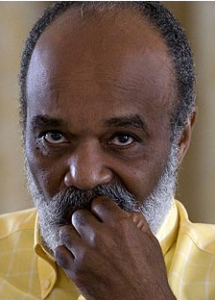 Congresswoman Maxine Waters headed mission to Haiti this week. The American team included President Clinton’s man, responsible for reconstruction of Haiti. These visitors accompanied by Ambassador Kenneth Merten, met with various political and business leaders to see what truth there might be in stories about President Preval’s out-of-control theft of emergency relief funds and relief materials.

The team was very blunt in its insistence that there will be an election in November and  all parties will participate  including Lavalas.  They warned Preval as to the danger he faced should he decide to meddle in the electoral process. They said they were aware of his ongoing criminality and his plans to subvert Haiti’s democratic process, amend the Constitution and create a new style of dictatorship paralleling that set up by Chavez and attempted by the last president of Honduras.

Ambassador Merten made it clear that the American government expected an unhindered election in November, followed by Preval’s departure.

There has been discussion on the fact that there will be no instances in which a president, and his cohort, will fly into luxurious exile, with their stolen fortunes intact.

This time there will be fair justice. The people will be judged and the innocent will be free.

The guilty will be jailed.

Their fortunes seized to be used for Haiti’s recovery.

President Rene Garcia Preval will fly to Washington on Monday for a Wednesday meeting with President Obama. There will be no official reception. He will be met by an angry Obama who doesn’t need another embarrassment in his hemisphere.

Admiral Mullen has already tried to explain the insane meeting he endured with Preval as the Haitian President ranted about accusation of theft, pillage, embezzlement, kidnap and much more. Preval retorted that his government had high moral standing…   One wonders what standard he would use to claim that!

Obama knows about the $198,000,000 stolen by Preval from Petro Caraibe funds. He knows of the recent $30,000,000 stolen from Latin American funds, given to Preval for Quake relief projects. A member of a bank staff has described how the money was electronically distributed to Preval,  Elizabeth Delatour, Jude Celestin and Dimitry Vorbe.. Obama knows how the customs service has been ordered to derail or grab all relief supplies, for use by UNITE in the elections – if held. Obama knows everything….. What remains to be seen is how he will use the intelligence he possesses.

Even as the meeting was planned, Grande Anse declared its intention to move forward with its own emergency program, as did a number of individual mayors. What can Preval do about these declarations of independence. The answer is – NOTHING! What police officer would move against those Haitians trying to help their people? Would MINUSTAH move?? I think not.

The sun is setting on the Preval criminal debacle.

All that is required will be the resolve to force a criminal judgement of President Preval, Elizabeth Delatour, Dimitri Vorbe, Jude Celestin and the rest of his criminal conspiracy. The Haitian people should have their hundreds of millions recovered for the Nation’s use.