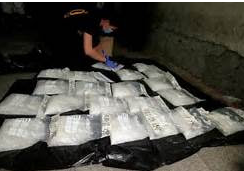 FIVE Haitian nationals are in police custody in connection with the discovery of a “significant amount of cocaine” on Saturday in Inagua.

Supt Ferguson said the find was “very significant” but could not give a tally of how much drugs were seized or give a dollar value as “officers are still pulling drugs from the vessel” when he spoke to The Tribune.

“The drugs were discovered during a search of a Haitian freighter vessel which was docked in Inagua headed to Grand Bahama,” he said.

“Five persons, including the boat captain, were arrested and taken into custody. We have not completed the search so we do not have a total amount as yet. We are still searching the vessel. The drugs were hidden in a concealed compartment of the vessel. The search is not completed but it is a significant amount. They are Haitian nationals and the boat originated from Haiti.”

The seizures were made in two separate incidents following the discovery of two large cannabis fields in the area of Owens Town, North Andros.

The first discovery took place around 1pm on Wednesday.

According to reports, DEU officers along with DEA agents from the United States were on routine patrol when they discovered a marijuana field and uprooted an estimated 8,000 marijuana plants.

DEU agents returned to the area the next day around noon and discovered a second field, where they uprooted an estimated 2,300 marijuana plants.

Police said no arrests were made in the seizures and investigations continue.