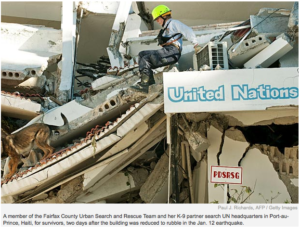 PORT-AU-PRINCE, Haiti (March 17) — Three months ago, I stood on the fifth floor of the Hotel Christopher, as the sun was setting, looking out at this city with Alexandra Duguay, public information officer for the United Nations. One month later, Alexandra was dead. Two months after that, here I am, remembering especially those last few minutes we spent together.

As a writer and a journalist, it becomes easy — and tempting — to explain Haiti in terms of disaster math. Magnitude of the quake: 7.0. Number of homeless: 1.3 million. Days of rain last week: five. Many of my stories talk about the numbers of things: tents and rubble, children and houses, dollars and deals.

Alexandra was one of more than 100 U.N. employees who died in the earthquake and one of over 230,000 people who died in Haiti.

But she was more than a number. And her life, the way she lived it, was a better way to understand Haiti than through her death.

Alexandra was just 31. I turned 31 a few days ago. Maybe that’s why I’m thinking of her so much now. She was bright, beautiful, funny and popular. She was also exceptionally good at her job. When I arrived here, everyone at the U.N. said, “Go see Alexandra. She’ll tell you everything.”

When we met, I told her I was looking for good news, great projects and the biggest challenges in Haiti. Within moments, she effortlessly described the landscape of the country, gave me the names and phone numbers of a dozen important people and, without statistics or abstractions, helped me understand Haiti’s story.

Lately, I wonder, if she came to me now, how I would describe these past few months to her, to a friend who knew and loved this country. Instead of generalizing, quantifying and exaggerating as journalists tend to do, maybe it would be best to start where Alexandra left off.

During the earthquake, Hotel Christopher just went up in dust. I heard about one person who was driving on the road next to the U.N. base and said the earth shook, then seconds later the car was enveloped in a cloud. It was like 9/11. Life imploded. For weeks, there were bodies and demonstrations and excruciating loss and, then, numbness.

Things have been slow to start up again. Except haircuts. For some reason, after the earthquake, barbershops were trimming people up within a few days. These happy little details — women selling vegetables, the tap taps coming back, older brothers once again feeling free to steal the toys of their little brothers — mostly get lost in the chaos of need. And that hasn’t changed.

Aid organizations are all talking about the same stuff as before the earthquake — water, food, sanitation, agriculture, development, etc. Except now, everybody’s got a ton of money, no consensus and no leadership. Their collective sense of urgency is only outweighed by their collective confusion.

If there were too many hands in the pot before, well, it’s wild now. The U.N. used to manage people and programs; now it’s refereeing them.

Lots of people lost their minds and left.

But many of the old places are still here. Recently, I had dinner at Quartier Latin in Petionville, which has been open for a while. The restaurant was just like it used to be: white SUVs from all the aid organizations were lined up outside. Meanwhile, Place Boyer, the whole square, block to block, is covered in people who live there in tents and tarps.

Emily Troutman for AOL
Millions of the country’s quake survivors now live in make-shift tents in refugee camps, like this one in Petionville, Haiti.

It’s your basic refugee camp, except that there’s also commerce and a lot of normal things. People still have their cell phones. That night, people in the camp watched a karate movie projected on a big screen. Generators powered lights and even computers. Kids ran around. Guys bought Barbancourt rum.

Outside the restaurant, the smell of urine was overwhelming. Streams of it ran down the block, with stagnant, toxic green puddles forming at the bottom. It’s like that wherever there is a camp. When it rains, it’s worse. The smell makes it easy to see how little has been done.

But ask any one of a zillion questions and you’ll get the same old answer: “That will be up to the Haitian government.”

Some good things: People are starting to have a little fun again. Not real, unadulterated fun. But limited, modest fun. Haitian musicians stop by and sing in the camps. A week after the quake, there was a joke being sent around by text message. It was something like, don’t give God any more units on his cell phone, because this time he paged us, but next time, he might actually get through.

The last time I had fun here I was with Alexandra. And as the streets and restaurants in Haiti come alive again, I remember her. But more than that, I remember our last conversation and how quickly life can change.

We were both exhausted from the night before. She had organized a charity auction and party at her home to benefit a small orphanage. I donated a few photos and spent the evening enjoying Haiti, instead of talking about “Haiti.” I didn’t take a single picture of Alexandra, though she spent the evening taking pictures of all of us.

As the evening grew late, the party moved to the Hotel Oloffson, where we watched RAM play. It was a sign of the times, perhaps, that Richard A. Morse was still just a local musician and not a Twitter celebrity. The crowd at the show was the most diverse I had ever seen anywhere. And I just kept saying, “This is amazing.”

The next afternoon, when I went to meet Alexandra at her U.N. office, we sat together finishing whatever small business we had to discuss. Then as I got up to leave, I looked out of the balcony doors at Port-au-Prince below us, darkening as clouds rolled over the mountains in the distance. It looked like it might rain that evening and I said, “It must be great to watch the weather from here.”

Alexandra smiled, stood up and went to the edge of the balcony, “It’s my favorite thing about this office. When the rainy season starts, you can see the big storms coming for miles.” We were quiet then, in awe of, in love with, what nature could bring.