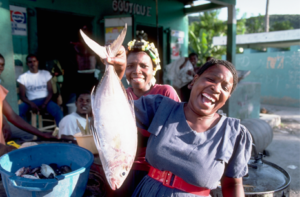 PORT AU PRINCE, HAITI – Haiti is a country hungry for food. Poverty, natural disasters and a corrupt government have all contributed to what is now a food security crisis.

Tackling hunger in Haiti is a full-time business for CBN’s Operation Blessing.

“When I first went to Haiti in 2009 and saw how hungry the people were, but at the same time how much water they had and how much sunshine they had I thought boy what a place for aquaculture, this is a perfect scenario for someone to be in the fish farming business,” Operation Blessing President and Chief Operating Officer Bill Horan said.

At the Operation Blessing fish hatchery they breed tilapia; it helps provide protein for the Haitian diet, restocks empty lakes and improves the Haitian economy.

“Tilapia is great for Haiti because it’s one of the easiest fish to grow, it grows fast and it has a lot of meat,” fish farm manager Alix Roy said.

There is a huge market for fish in Haiti because many of the lakes and reservoirs are empty.

“Generations of hungry people, they scour the ponds and the lakes and the rivers and even harvest tiny fish, just for sustenance for their families,” Horan said.

Operation Blessing produces more than a million baby fish, or fingerlings, a month. They are sold to fish farms across Haiti, or put into its lakes and reservoirs. Taino Aqua Ferme (TAF), OB’s largest customer, buys up to 70,000 fingerlings a month to grow and sell to the Haitian people.

“First year we’re looking at producing about 500 tons which is about a million pounds. We’ll be the largest aquaculture operation in the country and we hope to grow from there,” Hans Woolley, a co-founder of TAF said.

TAF currently has six massive cages, in one of Haiti’s largest lakes, for the fish to grow. Each cage can hold 200,000 fish and they hope to double the number of cages over the next few months.

“Our fish are actually growing ahead of schedule. They’re about 35 percent ahead of what we anticipated, which is all great news. They’re more efficient than we thought they were going to be in terms of converting food to mass and they seem to be swimming and very happy,” Woolley said.

While selling fingerlings is a major part of the Operation Blessing fish hatchery’s work, they also donate full grown fish for meals at schools, orphanages and hospitals.

“The human body requires protein, in Haiti it’s a steady diet, for the poor,S of beans and rice and they don’t always have enough beans and rice,” Horan said.

The fish hatchery helps provide a sustainable food source and also much needed jobs, that’s the real solution to poverty and the ultimate goal of Operation Blessing in Haiti.

“Everyone’s heard the old saying about teaching a man to fish. I believe in that principle, but we want to teach a country how to fish,” Horan said.