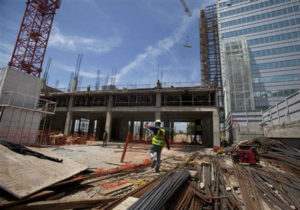 A donor to the Clinton Foundation reached out to Hillary Clinton’s office to promote a Haiti hotel project that later received support from the U.S. government and Bill Clinton, according to emails released by the Department of State.

Richard L. Friedman, a Boston hotel developer emailed Cheryl Mills, Clinton’s chief of staff, to tout the project on May 17, 2011.

“We had a good meeting with Jean-Louis, Marriott executives, [the Overseas Private Investment Corporation], etc regarding building hotels in Haiti—I am pursuing this vigorously and hope to be able to develop 2 to 3 hotels with Marriott as manager,” wrote Friedman. “I am talking with Commerce and Export/Import Bank today.”

Friedman said he recently had a discussion with Hillary Clinton at the White House and asked Mills to forward her a note for him. It is unclear what he and Clinton discussed, and portions of his email have been redacted by the State Department due to “personal private interests.” The note he asked Mills to send to Clinton is also redacted.

“I will keep you informed about our progress in Haiti—we are going to need all the help we can get,” Friedman wrote Mills.

Mills forwarded Friedman’s full email to Clinton and her scheduler, Lona Valmoro, on June 7 with the note “See highlight—resending.” The copy released by the State Department does not indicate which portion of the email Mills highlighted.

He is not the only Clinton donor associated with Marriott’s efforts in Haiti. The company Digicel Group teamed up with Marriott International in 2011 in Port-au-Prince to build a luxury hotel, which opened earlier this year.

Digicel has contributed between $25,000 and $50,000 to the Clinton Foundation, and its owner, the Irish billionaire Denis O’Brien, has donated between $5 million and $10 million. Unigestion Holdings, a subsidiary of Digicel that was reportedly tasked with managing the hotel project, gave between $10,000 and $25,000.

Marriott International is also a hefty donor to the Clinton Foundation, contributing between $50,000 and $100,000.

According to a Marriott press release on Nov. 28, 2011, the Clinton Foundation helped arrange the partnership between the hotel group and Digicel.

The Port-au-Prince hotel project continued to work closely with the Clinton Foundation during the construction process. The foundation said on its website that it was “pleased to help facilitate the groundbreaking of the new $45 million dollar Marriott/Digicel hotel,” which opened last March.

Bill Clinton attended the hotel’s opening, where he thanked Marriott for “giving all of you the chance to show the real Haiti to the world that will come to this hotel.”

Marriott has received support for its hotel projects from the U.S. government and affiliated international donor groups. In 2012, the Overseas Private Investment Corporation, a U.S. government entity whose budget is linked to the State Department, pledged to provide long-term loans of up to $200 million to help finance Marriott International “environmentally-sustainable” hotel construction in “emerging markets” in the Middle East, Africa, Latin America, and the Caribbean.

The International Finance Corporation, a member of the World Bank Group whose U.S. funding is also linked to the State Department appropriations, provided $26.5 million in financing to help construct the Port-au-Prince Marriott in 2013.

The luxury accommodations are Haiti’s “first internationally branded hotel,” according to the Clinton Foundation website.

Marriott announced earlier this month that it plans to open 60 additional hotels in the Caribbean and Latin America by 2018.

Watchdogs said the lack of transparency in this matter is unacceptable.

“Wherever government money or support tied to the State Department is directed to a project in Haiti involving a major donor to the Clinton Foundation, the public is entitled to full transparency,” said Ken Boehm, chairman of the National Legal and Policy Center, a government watchdog group.