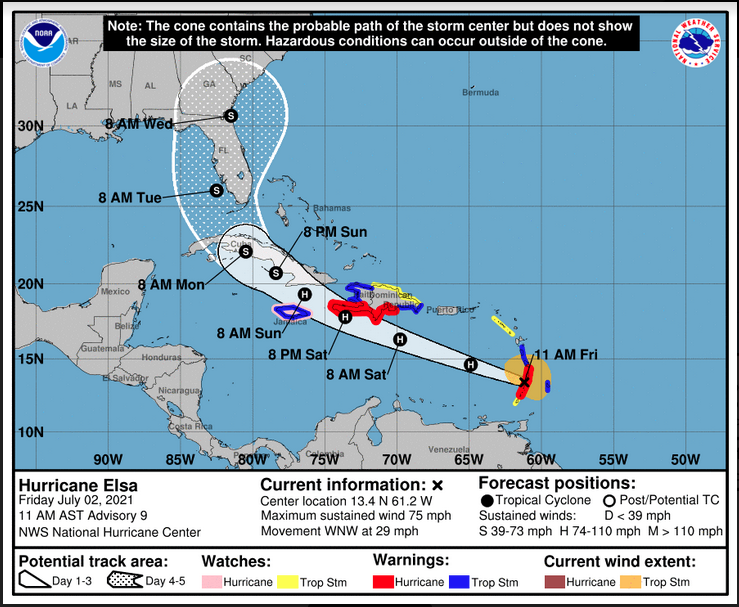 It is the third storm of the season to threaten the US coastline, potentially nearing the Florida Peninsula by next week, including around the site of the deadly Surfside condo collapse.
Elsa has sustained winds of 85 mph, with gusts up to 105 mph, the National Hurricane Center said. At 8 p.m. ET, the Category 1 storm was racing west at 30 miles per hour, about 800 miles east-southeast of Kingston, Jamaica.
TRACK ELSA HERE
A hurricane warning is in effect for Jamaica, the southern portion of Haiti from Port Au Prince to the southern border with the Dominican Republic, and the southern coast of the Dominican Republic from Punta Palenque to the border with Haiti.
A hurricane watch has been issued for six provinces in eastern Cuba.
Tropical storm warnings are in place for the southern coast of the Dominican Republic east of Punta Palenque to Cabo Engano, and the coast of Haiti north of Port Au Prince.
A tropical storm watch is in effect for Saba and St. Eustatius, the north coast of the Dominican Republic from Cabo Engano to Bahia de Manzanillo, and the islands of Cayman Brac and Little Cayman.
“A hurricane warning means that hurricane conditions are expected somewhere within the warning area, in this case in the next few hours. Preparations to protect life and property should be rushed to completion,” the hurricane center said in a special advisory on Friday morning.
Elsa was the earliest fifth named storm on record, pushing this season ahead of the pace set by the record-breaking 2020hurricane season. The first hurricane of the season typically isn’t seen until August 10, with the average date of a first tropical storm falling on July 9.

Puerto Rico could get up to 3 inches of rain

The forecast track for the storm calls for it to move near the southern coast of Hispaniola on Saturday, bringing hurricane conditions to southern Dominican Republic and Haiti by late Saturday. Some strengthening is possible before the storm reaches land on Saturday.
On Sunday, the storm is forecast to move over or near Jamaica and Cuba, where the interaction with land could weaken the system back down to a tropical storm.
It is forecast to bring 4 to 8 inches of rainfall Friday to Windward and southern Leeward islands, including Barbados, with locally up to 15 inches. Puerto Rico could see 1 to 3 inches through Saturday. Flash flooding and mudslides will be possible in areas experiencing heavy rainfall.
In Barbados, Elsa has knocked the power out according to Charles Jong, director of communications for Barbadian Prime Minister Mia Mottley.
Debris and tree branches are littered across the island and photos are emerging of buildings without roofs and large trees down, thanks to some of the strongest winds Barbados has experienced in decades, according to Jong.
Across portions of southern Hispaniola and Jamaica, rainfall of 4 to 8 inches — with isolated amounts of up to 15 inches — is possible Saturday into Sunday, the hurricane center said. 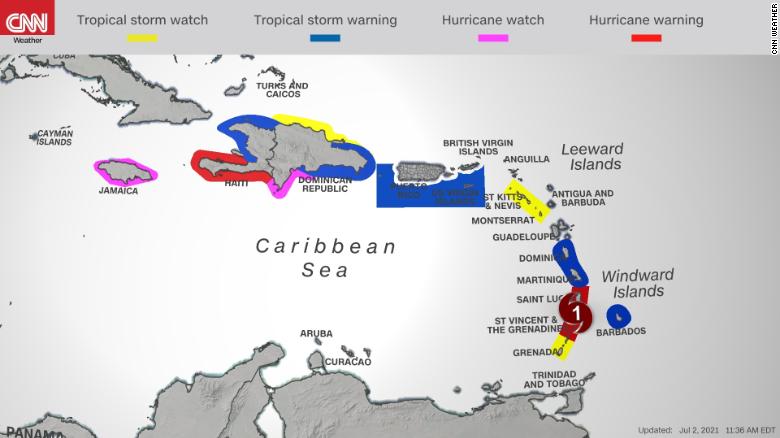 Those near the recently erupted La Soufriere volcano in St. Vincent and the Grenadines have an additional concern to worry about: heavy rain causing lahars.
“As the volcano erupted, it deposited vast amounts of ash on the island, much of it at higher elevations. Heavy rain will mix with the ash, creating a slurry that may cause significant mudslide-like damage — called a lahar,” said CNN meteorologist Chad Myers.
“Across portions of southern Hispaniola and Jamaica, rainfall of 4 to 8 inches with isolated maximum amounts of 12 inches is possible Saturday into Sunday. This rain may lead to scattered flash flooding and mudslides,” according to the hurricane center.

By Monday morning the storm is expected to turn more to the north and could move over Florida, most likely on Tuesday. There is considerable uncertainly with the extended forecast, so the exact part of Florida is still a major unknown. Almost the entire state of Florida is in the forecast cone from the hurricane center.
Elsa within days could impact search and rescue efforts at the site of the condo collapse in Surfside, Florida Gov. Ron DeSantis said.
“It is possible that this area could see tropical storm-force winds,” he said Friday morning. “Not guaranteed, but it is possible, and so our Department of Emergency Management is assuming that that will happen and making the necessary preparations to be able, obviously, to protect a lot of the equipment.
“You could potentially have an event with the building, as well,” DeSantis said.
Miami-Dade County Mayor Daniella Levine Cava told CNN’s Wolf Blitzer Friday that “it’s too early to know for sure that we are in danger” from Hurricane Elsa, “but nonetheless we have to prepare.”
“We have started that process and urged everyone to make the necessary hurricane preparations,” the mayor said. “And we’ll be monitoring the storm so that if it seems that the wind strength will be too high for us to safely continue to search and rescue, we’ll have to put a pause.”
At a press conference earlier Friday afternoon, Levine Cava said that demolition of Champlain Towers South would not begin before the storm has made its way through the Miami area.
Search and rescue work at the site was temporarily halted Thursday because of structural concerns about the standing structure, then resumed in the evening. The Florida State Response Team has coordinated 500 on-scene local and state responders, DeSantis has said.
With Elsa’s impacts on Florida “starting as early as Sunday night … we’re adding this special emphasis on this site because we understand the sensitivities involved,” the governor said.
Miami-Dade County faces the risk of heavy rainfall and strong winds from Elsa from Sunday night into Monday morning, county Office of Emergency Management Division Director Charles Cyrille said Thursday night.
While officials don’t think the county is in immediate danger, they have developed emergency plans, he said.
The Florida Keys and portions of the southern Florida Peninsula early next week face a risk of storm surge, wind and heavy rainfall, the hurricane center warns. How strong Elsa will be next week is also highly uncertain due to the possibility of land interaction and disagreements among the weather models.
The hurricane center has low confidence in the extended forecast track. Some weather models predict Elsa turns and stays east of Florida, while others take it into the Gulf of Mexico, leaving the entire Florida Peninsula in the cone of error.
“It is too soon to determine what, if any, impacts could occur there next week given the uncertainty in the long-range forecast,” the hurricane center said Thursday.