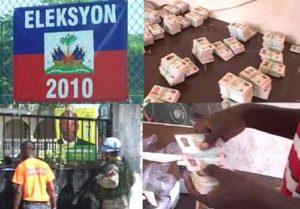 The run-off election has been tentatively scheduled for March 14, 2011.

This potentially suicidal situation has been forced upon the Haitian people by the American Embassy and Hillary Clinton’s State Department. By their refusal to recognize the November 28, 2010 election, for what it was, a fatally flawed and fraudulent process, they are trying to arrive at a satisfactory conclusion utilizing unsatisfactory materials.

No one can guarantee votes that the OAS team worked with are all of the votes generated….or that they are, in fact, really associated with the voting day. There is no “chain of evidence” that follows the paper from the polling stations to their position today.

The process is so badly flawed that no realistic result can be generated, especially when the three top people, in the run-off, were not really the three most popular people. Four false polls were created by Reginald Boulos, President of Haiti’s Chamber of Commerce, to show Manigat as the leader. He did this for President Preval, who planned to put Manigat in power, with n0o power at all. He would name her Prime Minister and cabinet. His INITE party would control parliament.

Boulos has an automobile agency that sold 100 vehicles to Preval/Celestin. Rudi Boulos, his brother, was given a Haitian passport, by Preval, ending the controversy over dual citizenship with which Preval kept him from his senate seat.

The real leaders in Haitian popularity are Jean Henry Ceant, Charles Baker, and Michel Martelly. Celestin and Manigat were near the bottom of the list with single digit results.

Having said that, there has been a continuous stream of foreign ambassadors to Jude Celestin’s home, trying to convince him that he must step down…..so that Mirlande Manigat will win the election. They plan to pop Martelly’s cocaine dossier at the last minute, removing him from the game under threat of criminal prosecution.

And they call this Democracy??

If this election goes forward there will probably be violence….in the short run. In the long-run there will be a continuing disaster that will make Preval’s crime a dream.

Mirlande Manigat has betrayed the nation and will never be accepted.