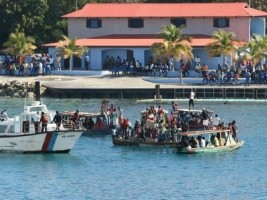 PORT-AU-PRINCE, Haiti (AP) — Royal Caribbean Cruises Ltd. on Tuesday re-established port calls to its fenced-in site and beach attraction in northern Haiti after suspending visits just over a week ago.

The Miami-based company suspended cruise ship stops to the Labadee port on Jan. 19 when one of its ships encountered people staging a protest in small boats.  There were conflicting reports about the reasons for the recent protest in the bay. Cruise ship passengers don’t leave the fenced-in area, long a source of frustration to area residents.

Spokeswoman Cynthia Martinez says the company has been in close communication with Haitian officials and is now “comfortable that there will not be any significant impact” on passengers.

The massive Allure of the Seas ship arrived Tuesday and tourism ministry officials said more visits are scheduled this week.

Royal Caribbean has provided the largest source of Haiti’s tourism revenue for decades. The visitors are prohibited from leaving the cruise line’s property, which features white-sand beaches and one of the longest zip lines in the world.

Tourism Minister Stephanie Villedrouin tweeted Tuesday that the government has been working “collaboratively with local people on sustainable projects.” A ministry spokesman did not immediately respond to an email seeking clarity about the recent protest, saying a full explanation would be provided shortly.