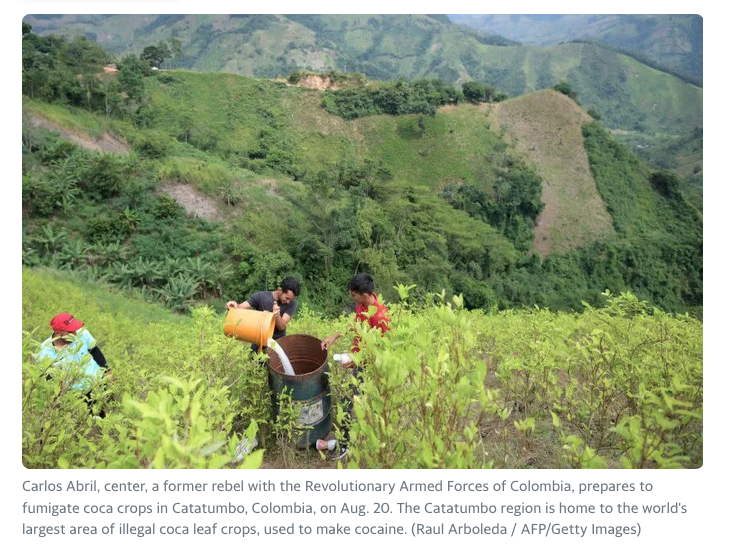 The grizzled farmers had come on motorcycles and in pickups from jungle homesteads to a soccer field hours from the nearest town of any consequence.

They sat patiently in white plastic chairs in the sweltering heat as government representatives gave their pitch: Plant legal crops like sugar cane and pineapple — or turn to livestock — and abandon coca leaf, the raw ingredient in cocaine.

Cash subsidies await those who sign up, the speakers vowed. We will help you market your new products, build new roads. There were few takers. The cocaleros, as the growers are known, had heard it all before.

“We tried this already, and the government never complied with its promises,” explained one of the men, a 44-year-old father of three who offered only his first name, Elver.

“We tore up our plants, but we never got the help we needed,” he said. “So now we are back to planting coca. It is the only way to make a living here.”

That is something that Colombia’s first leftist president is vowing to change, even as acreage sown with coca leaf soars to new heights and the Biden administration watches warily.

Exactly how Gustavo Petro plans to proceed remains a major question for a leader who took office in August and is also endeavoring to guide his country out of more than five decades of civil war and fix a reeling economy. The odds are stacked against him.

Colombia, long the world’s largest cocaine producer, had a record 504,100 acres of coca plants — enough to make 1,400 metric tons of cocaine — under cultivation at the end of 2021, according to a report released Thursday by the United Nations Office on Drug and Crime. The numbers — a 43% increase in acreage and a 14% hike in potential yield of cocaine compared with a year earlier — are the highest since the United Nations began gathering such data more than two decades ago.

The jumps “are without precedent,” Néstor Osuna, the Colombian justice minister, said in response to the report. “If we want to reverse these figures we have to do something different.”

Coca bushes now cover nearly five times more territory than they did in the days of Pablo Escobar and his Medellín cartel. Yields are much higher these days thanks to improved agricultural techniques and more productive strains of the leaf.

The vast majority of Colombian cocaine ends up in the United States, where demand remains high and the practice of cutting the drug with fentanyl has made consumption increasingly risky. In 2021, almost 25,000 people in the United States died of drug overdoses involving cocaine, more than quadruple the number in 2014, according to the National Center for Health Statistics.

The new Colombian president has vowed not to return to the violent days of forcibly destroying the fields of small-time coca cultivators like the farmers gathered here on a recent Sunday afternoon. Past confrontations with coca-growing communities have resulted in bloody battles, notably a 2017 incident in which seven farmers were killed when police swooped in to destroy coca plantings in a jungle clearing in Tumaco township, in western Colombia.

The country’s president, a former leftist guerrilla schooled in the lexicon of a bygone era, refers to leaf producers as “the coca proletariat” — blameless peasants persecuted and trapped in a kind of security state labyrinth without reprieve. More than 200,000 families in Colombia depend on coca cultivation for their livelihoods, according to a recent study by the International Crisis Group, a Brussels-based think tank.

“The war on drugs has failed,” Petro, 62, declared to the United Nations General Assembly in New York during a September address, in which he blamed the “hypocritical” multi-decade effort for having unleashed “torrents of blood” in Latin America.

The over-the-top oratory and anti-American rhetoric has not endeared Petro to Washington, which has a decades-long strategic partnership with the South American nation.

Under Plan Colombia, the counter-narcotics regimen launched in 2000 and backed by successive Democratic and Republican administrations, the United States has pumped some $13 billion in mostly military assistance into the country. That’s more than it has spent on any other nation in Latin America.

Despite his denunciations of the drug wars and capitalist greed, Petro appears to recognize the value of cordial relations with Washington. U.S. authorities have echoed his calls for the United States to cut its own drug consumption, which drives the trans-national drug trade and has fanned instability in much of Latin America.

At a meeting this month in Bogotá with U.S. Secretary of State Antony J. Blinken, Petro seemed to veer away from controversial earlier comments suggesting support for partial decriminalization of cocaine and marijuana.

“We strongly support the holistic approach that President Petro’s administration is taking to counter narcotics through comprehensive rural security, justice, development, environmental protection, supply reduction, as well as demand reduction, including in the United States,” Blinken said during the meeting.

The White House is keen not to cede any more geopolitical terrain in the hemisphere to China, or Russia, at a moment when leftist governments are on the rise again in the region.

“The Biden administration won’t allow Petro’s breathless rhetoric to get in the way of long-standing counter-drug cooperation,” said John Feeley, a former U.S. ambassador to Panama and executive director of the Center for Media Integrity of the Americas, a project of the Organization of American States.

Petro’s approach is certain to differ from the drug strategy of his right-wing predecessor, Iván Duque, who pursued aggressive eradication of coca fields and even pushed, without success, for renewed aerial fumigation — a step that the Trump administration wanted Colombia to take. Colombia suspended aerial fumigation with the herbicide glyphosate in 2015 because of health and environmental concerns.

Petro says he welcomes U.S. assistance in bolstering intelligence and blocking maritime smuggling routes and will not shut down extraditions of traffickers and others to the United States. But he has ruled out aerial spraying of coca fields and will focus on continuing hand eradication efforts on large-scale “industrial” producers, not subsistence growers.

“Low-income people in far-removed, excluded areas are forced to grow illegal crops and are put at the service of drug trafficking,” Petro said during his meeting this month with Blinken.

The 2016 peace deal between the Colombian government and the guerrillas known as the FARC, or Revolutionary Armed Forces of Colombia, called for rural development to ameliorate the poverty driving so many Colombians to turn to coca cultivation. A key plank of the peace accord was to do away with the illicit drug economy that has driven violence and insecurity in Colombia for more than half a century.

The farmers, vowed Petro, will no longer be viewed as “criminals.”

The government plans to ramp up efforts to encourage producers to shift to alternative crops. Tens of thousands of families signed up for crop substitution following the 2016 peace plan, and many voluntarily destroyed or abandoned their coca shrubs. But public investments faltered amid budget problems and a lack of commitment. Many farmers dropped out and renewed planting, especially in remote zones where the government is largely absent.

A government void is evident here in the tropical Guaviare region in south-central Colombia, straddling the country’s eastern plains and jungles on the flanks of the Amazon.

A rubber boom here in the early 20th century petered out but later gave way to a coca boom in the 1980s. Deforestation, from cattle ranching and cultivation of coca leaves and other products, is widespread. For decades, FARC guerrillas occupied much of the countryside and ran the cocaine trade. Dissident guerrilla bands maintain a presence and still depend on the illicit sales.

Although crop substitution has had some success in Colombia, experts say, it is an especially difficult transition for farmers in far-flung, scantily populated areas like Guaviare. Transport of crops to markets is problematic; prospective customers for non-coca products are relatively few.

Unlike in Peru and Bolivia — two Andean nations where some cultivation of coca leaf for chewing, tea and other uses is permitted — there is relatively little legal cultivation of the leaf in Colombia. The vast majority of coca acreage in Colombia is dedicated to illegal cocaine production.

Residents of Guaviare and many other coca-growing regions say it is simply impossible to match the economy of coca — a fast-growing bush with multiple annual harvests and guaranteed buyers. Once the leaves are converted into the paste used to make cocaine, shipping can be handled in small vehicles rather than large trucks.

“It’s very hard to replace coca,” said Jhon Edilson Castañeda, president of a farming association in Guaviare. “And, here, in particular, there is no state presence willing to make the necessary investment.”

Many are anxiously waiting to see what the country’s new leadership will offer. There is widespread skepticism, however, that enough aid will be forthcoming to supplant king coca in Guaviare and many places like it throughout Colombia.

“The government better give us something really good, because the reality is that the people here are tired of waiting,” said Henry Astros, 44, a father of two who said he abandoned coca production on his parcel a few hours’ drive outside of San Jose del Guaviare, the regional capital, following the 2016 peace accords.

Astros took up growing oranges, lemons and other crops. “But here there is no way to get our products out, besides coca,” he explained, noting how the rugged dirt roads become quagmires in heavy rains.

Like others, Astros hedged his bets. He has maintained coca saplings to aid in potential replanting. Coca bushes still grow wild on one of his old plots — a site that he said can easily be cultivated anew.

“Our goal is not to have to grow anything illegal,” Astros said. “We don’t want to bring harm to the people who consume this. We do it only to sustain our families. I left cultivating [coca] hoping never to have to go back. But at this point, we have little choice. We will wait to see what Petro does.”