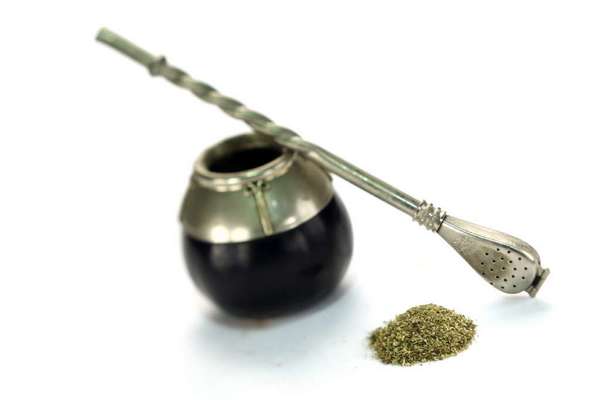 For thousands of years, bottle gourds have been cultivated for use the world over as drinking vessels, medicine bottles and even fishing bobs. A new study looks at how they got to the Americas from their native Africa. Here, a preserved gourd stores yerba mate tea. (Kirk McKoy / Los Angeles Times / March 11, 2009)

The bottle gourd, beloved since pre-Columbian times not only for its voluptuous shape but for its endless uses, very likely floated on ocean currents from its native Africa to South America inside the span of a year, with its seeds still intact and ready to propagate itself in the New World, says a new study.

Sometimes called the calabash, opo squash or long melon, Lagenaria sicenaria was one of the first domesticated plants, and as long as 11,000 years ago, archaeological evidence suggests it was being used by humans from east Asia to the Americas. But how the cultivated bottle gourd became such a ubiquitous human tool — a drinking vessel, musical instrument, fishing bob, cricket cage and medicine bottle, as well as food — remains a mystery.

A 2005 study suggested that by the end of the Ice Age, the bottle gourd was already widely grown in Asia for use as a canteen and made its way to the Americas slung across the backs of Paleoindians as they migrated across the Bering land bridge with another domesticated species, the dog.

But anthropologists have found little evidence of the bottle gourd’s widespread use among Siberian or Alaskan inhabitants of the Late Pleistocene era, and the growing season was likely too short and too cold to grow this African native so far north. So the gourd’s route to the Americas has remained a matter of debate.

Enter a team of anthropologists, geneticists, engineers and oceanographers scattered across the United States, led by evolutionary molecular biologist Beth A. Shapiro of UC Santa Cruz. The team used genomic analysis and models of ancient ocean currents to explore the plausibility of the bottle gourd’s having made a somewhat more direct route from its African home to the New World across the Atlantic Ocean.

Their report was published Monday in the Proceedings of the National Academies of Science (PNAS).

The team collected modern domestic gourds from across North, Central and South America, as well as nine archaeological samples of gourds estimated to have been cultivated and used by humans as long ago as 10,000 years. They ground the rinds of those gourds and compared their DNA with those of domestic gourds grown in Africa as well as of gourds harvested from two of the last remaining sites in Africa where Lagenaria sicenaria continues to grow wild.

The genetic lineages of the African and Eurasian bottle gourds are quite distinct from each other, having diverged over thousands of years of cultivation. But the modern American gourds, as well as the gourds discovered in ancient human settlements stretching from Florida, Kentucky and Arizona to Mexico and Peru, all were found to bear the genetic imprint of their source: gourds from Africa.

How, then, did they get from Africa to the Americas? The team used data sets on ocean currents that support a wide range of oceanographic and atmospheric research, and which permit estimates of the rate at which floating objects will drift. The seeds of domestic bottle gourds floating in ocean water will remain viable for as long as a year. So the researchers looked for evidence that a gourd dropped into the water along Africa’s coast in the late Pleistocene era could make the crossing to the New World in less time than that.

Those models suggested that a bobbing gourd could make its way from Africa’s shores to American shores between Florida and Brazil in anywhere from 248 to 331 days. There, with the help of such megafauna as the mastodon, whose preserved dung has shown evidence of bottle gourd consumption, the plant may have made its way across the Americas.