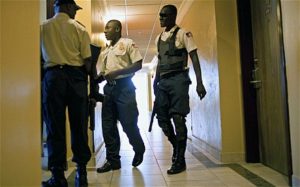 PORT-AU-PRINCE, Haiti – Haitian lawmakers and reporters say police have detained a prominent attorney who has brought corruption cases against the government.

Senate President Simon Dieuseul Desras is calling for an emergency session of legislators to discuss the arrest of Andre Michel.

Neither police nor prosecutors responded to phone calls seeking confirmation. The reason for the detention was unclear.