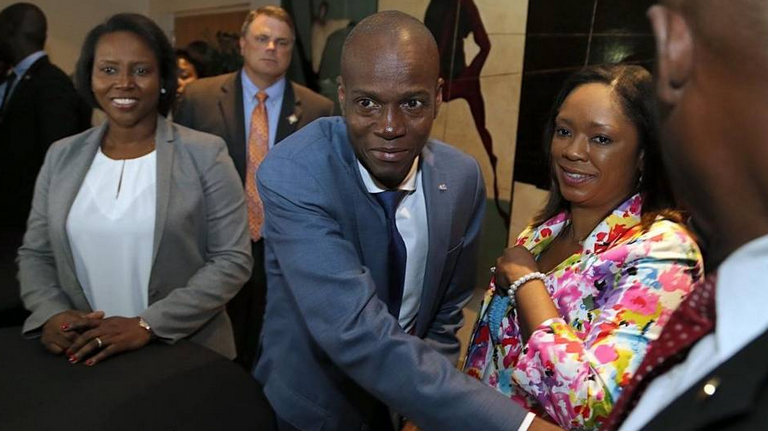 But now the country is in a rare position of strength as China and Taiwan engage in a global tug-of-war over diplomatic allegiances.

For now, Haiti is signaling that it’s aligned with Taiwan, evidenced by Haitian President Jovenel Moïse’s planned visit to Taipei this weekend accompanied by a retinue of parliamentarians, business owners and members of his administration.

Despite the trip, though, Moïse’s chief of staff, Wilson Laleau, noted that Haiti isn’t closing the door to other potential partnerships, including China.

“Taiwan is a longtime friend… [but] Haiti is looking for where its interests lie,” said Laleau, a former Haiti finance and commerce minister.

“We are talking to all to see what is possible,” he added. “We are looking for alliances, partners who want to come and invest with us. We are not looking for traditional aid, or people who are going to give charity. That’s what put Haiti in the situation it is in.”

Haiti’s seemingly wavering commitment to Taiwan comes as China increases its footprint across Latin America, and Taipei loses yet another ally with Thursday’s announcement by the West African nation of Burkina Faso that it is ending relations. Taiwan now has just 18 diplomatic allies worldwide, including Haiti.

While Tapei reacted angrily to the news of China’s latest move to form an alliance with Burkina Faso, the second in a month,the U.S. State Department has been making its position clear amid deepened concerns about China’s expanding geopolitical influence. Following the Dominican Republic’s announcement earlier this month that like Panama last year, it was cutting ties in favor of China, the U.S. has been sending messages to those in the region still aligned with Taipei to stay the course.

Florida Republican Sen. Marco Rubio has been one of the most vocal critics on China’s expanding influence.”

We are actively reaching out to the embassies of countries like Haiti, urging them not to make the same mistake as the Dominican Republic and emphasizing that doing so would represent a setback to U.S.-Haiti relations,” Rubio, chairman of the Senate Foreign Relations Western Hemisphere subcommittee, told the Miami Herald.

Rubio said he’s not insensitive to an impoverished Haiti’s need to attract investments, and he’s “not necessarily against China investment per se.” His issue, he said, is the quid pro quo nature of such deals. China, Rubio said, “has no problem” using its private investments in countries as leverage to align the countries with China’s interests.

“China views us as geopolitical competition and is trying to diminish our influence and that needs to be a factor,” when considering switching, he said. “The deal is never as good as it sounds on the front end.”

Rubio’s advice to the Haitian delegation this weekend:

“One dollar investment from Taiwan is better than $3 of investments from China,” he said. “Three dollars of Chinese investments not only will not flow to you, but it comes with all kinds of strings attached that are going to be problematic for decades to come.”

Haiti observers say the Dominican-Haitian border has become the new line of demarcation in the China-Taiwan battle in the region and wonder if Haiti will use its current leverage to negotiate additional assistance from the Trump administration, which has been pushing cuts in foreign aid, or a reversal of the administration’sdecision to end temporary protection from deportationfor more than 50,000 U.S.-based Haitians as of July 2019.

“Haiti is in a unique position today because the island of Hispaniola has suddenly become ‘ground zero’ for the battle between China and Taiwan for diplomatic recognition,” said Daniel Erikson, a former Obama administration adviser on Latin America. “The question is whether Haiti wishes to use this new-found leverage to strengthen relations with Taiwan and curry favor with the Trump administration, or if it decides to shift gears, cut ties with Taiwan, and embrace China.

“The bottom line,” Erikson added, “is that Haiti needs to dramatically increase foreign direct investment to boost economic growth, and that will weigh heavily on the talks in Taiwan.”

A former high-ranking Haitian government official expressed doubts that the Moïse administration has the skill to negotiate on the world stage.

“You have to have a clear vision, and everyone is complaining that they don’t see a clear vision on where this government wants to take us,” said the official, who is privy to some of the administration’s thinking and spoke on the condition of anonymity to openly share an assessment of the situation.

“In the Dominican Republic, there was debate. In Haiti, there has been no real debate about the benefits of Taiwan or China. It’s been more: ‘Will I align myself with the U.S. interests or will I take the risk and go with China because I need financing for my projects?'”

Moïse has been under increasing pressure internationally and domestically. The U.S., and Rubio, have pressed him about his support for Venezuelan President Nicolás Maduro. Foreign donors are calling for transparency and politically-difficult reforms in Haiti’s budget including price hikes on gas and changes in the electricity sector, both of which are subsidized. Without the reforms, Haiti, which is running a deficit, risks losing $96 million in budgetary support from the Inter-American Development Bank, European Union and the World Bank that it is due to receive before the end of September.

At the same time, Moïse also needs money for his flagship Caravan of Change public works program, and is facing threats of opposition protests over the deteriorating social environment. Earlier this week, labor organizers forced a two-day closure of about a dozen factories in Port-au-Prince by attacking them with rocks and forcing workers into the streets. The organizers are demanding a raise in the minimum wage for factory workers from $5.36 a day to $15.31, and that Moïse fulfill promises to provide workers with transportation and other social benefits to offset the rising cost of living.

With all the pressures, Haiti, the official said, has to pick its battles carefully. “They see the Chinese money as money for tomorrow, and Taiwan is money that can arrive much more quickly today to help them find some relief so that they can govern…” he said. “They will sacrifice mainland China for now, but the plan is to do the shift.”

While Haiti and Taiwan’s diplomatic ties go back 62 years, a China Commercial office did open in Haiti 1993. It was supposed to be the first step toward diplomatic relations with mainland China after a few years, said another official, who had been part of the negotiations.

Chinese interests in Haiti may include the country’s unexplored gold, copper and silver wealth, but the former high-ranking Haitian government official said China’s interests are more practical. Unlike the Dominican Republic, which has a number of U.S. investors, the Chinese would face no competition in Haiti and the country’s undeveloped terrain not only means a bonanza for Chinese construction firms, but also for business interests. Haiti’s proximity to the U.S., its duty free access to the U.S. market for Haitian-sewn apparel and foreign relations ties to the U.S. also are attractive to China’s geopolitical interests.

“I think Haiti could negotiate a great deal if [Moïse] were to recognize them. Clearly, nothing comes free, and China is not in the business of charity, but recognition could bring a great initial deal,” said Robert Fatton, a Haiti expert who teaches political science at the University of Virginia. “Afterward, watch out. China, like any other major power, defends its economic and strategic interest. China may, however, offer loans at a preferential and low rate which would be to Haiti’s benefit. In addition, the Chinese are not usually in the business of dictating the nature of your regime, unlike the U.S. ”

Neither Haitian nor Taiwanese officials are offering any specifics about the negotiations or the visit to Taiwan, which includes the head of Haiti’s Central Bank as well as the president of the Haitian Senate.

Laleau, the president’s chief of staff, would only say: “There are things we want to discuss with them….We want to give priority to investments, to find opportunities for our youth so they don’t have to get on boats and can live in their country with dignity.”