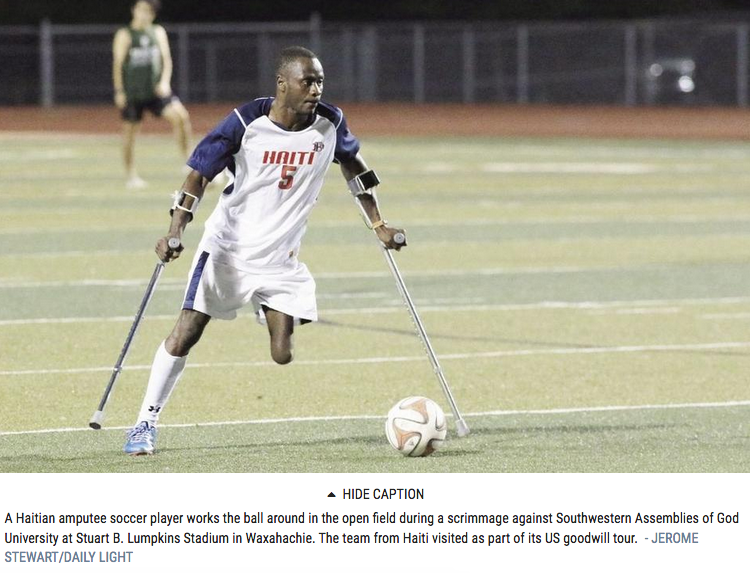 WAXAHACHIE — As Waxahachie ISD Athletic Director watched two soccer teams battle for possession at Stuart B. Lumpkins Stadium, he was just as inspired as impressed.

“The hope and inspiration they provide is pretty incredible,” remarked Reed of the Haiti National Amputee Soccer Team, who visited Waxahachie on Nov. 15.

After practicing with the Indian soccer team in the morning, the group visited classrooms throughout the Waxahchie Independent School District during the day. That evening, the team played an exhibition game with the Southwestern Assemblies of God University men’s soccer team at Lumpkins Stadium on its United States goodwill tour.

Dr. Fred Sorrells is the event coordinator for the team’s goodwill tour, as well as president of Operation Go Quickly and the International Institute of Sports. He noted that the 2010 earthquake in Haiti dramatically changed the lives of many Haitian men and boys.

“We saw those folks, who before the earthquake had been totally able-bodied, many enjoying soccer, and now all of a sudden had lost a limb. It was a huge psychological challenge that they faced, and we discovered amputee soccer.”

It is amputee soccer that provides physical, emotional, and spiritual support to these athletes. Instead of being outcasts due to their disabilities, Reed stated they return to Haiti “as heroes.”

And what is the central message that the Haiti National Amputee Soccer Team left for WISD?

According to Reed, “hope.”