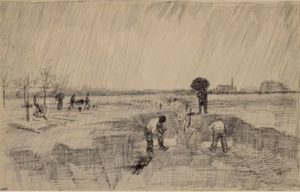 By Alex Kingsbury US News

Public health officials fear that the outbreak of cholera in Haiti will be much worse than earlier predicted. The Caribbean nation, which was rocked by a devastating earthquake last year, has been grappling with an outbreak of the disease for several months. But initial estimates of 400,000 infections could double, U.S. researchers told a British medical journal. Before the earthquake, the country hadn’t had an outbreak of the disease in more than a century, leading to the widespread belief among Haitians that the pestilence was brought to the island by international aid workers. The true origins of the outbreak are still unclear. The World Health Organization says that more than 250,000 people have already contracted the disease and more than 4,600 have died as of March 10.

This is either a simple lie or an indication of ignorance.

There is little treatment in the countryside so entire villages simply cease to exist.

1 thought on “WHILE EVERYONE IS FOCUSED ON PREVAL’S CRIMINAL ELECTION FARCE – HAITIANS DIE!!-Added COMMENTARY By Haitian-Truth”