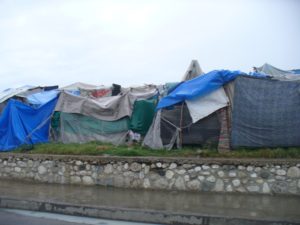 CHICAGO (CBS) ― Protesters criticize the American Red Cross for only spending a third of the money raised after the earthquake in Haiti on relief efforts there.

Who can forget the dramatic pictures and sounds of rescue from Haiti? It’s been only seven months since the massive earthquake devastated the country. Within hours of the quake, millions of dollars poured in to help. Now, a Chicago group wants to know what happened to all that money.

About 25 protesters went right to the Red Cross office in Chicago at 2200 W. Harrison, and draped a sheet over tree branches to symbolize tents, still the only shelter for millions in Haiti.

“We feel this is outrageous,” said Toussaint Losier, a Haitian-American leader of the protesters.

They say the Red Cross has collected more than $465 million specifically for earthquake relief in Haiti, but only a third of the money has been spent there.

“This is a humanitarian crisis that’s been allowed to continue and allowed to fester because people are not taking the situation seriously,” said Losier.

He has been to Haiti since the earthquake and has family there.

“You can hear that folks are not just in desperate, some say inhumane circumstances, but they’re really distressed because they don’t know what the future for them is,” said Losier.

“You have small tents on the ground and when it rains, the people stand up because the water goes under the tent and they get flooded sometimes,” said Aline Lauture, a protester.

Some of the criticism Tuesday was especially angry.

“The American Red Cross seems to be much faster in spending money on five figure salaries, hotels, car rentals, air-conditioned offices for its staff, instead of spending the money for real people with real needs on the ground,” said Alie Kabba of the United African Organization.

The Chicago Red Cross office did not duck the criticism.

Spokeswoman Martha Carlos came outside and addressed their concerns. She called the spending of only a third of the donations “wise”, insisting the Red Cross is trying to make a long-term commitment that will sustain Haiti long after the relief agencies are gone.

“We want to not just give a bottle of water, we want to focus on building water treatment systems,” said Carlos.

That kind of effort, she argued, takes time. The Red Cross says it welcomes scrutiny of how it spends money.

The protesters there Tuesday said they plan to sit down with Red Cross officials.

For more information on the Red Cross, and how it spends money for Haiti relief, click here.

When I was a young child, I can remember my parents comments about the Red Cross and I must say I am not in a position to challenge their feelings.

This was reinforced by a classic case of deception, carried out by the Haitian Red Cross as they tried to show what had been done in Haiti.

Their picture showed a couple of really nice white tents, complete with Red Cross logos. These were supposedly what the Red Cross was supplying to house Haiti’s victims.

I went to the same place and saw the two tents. 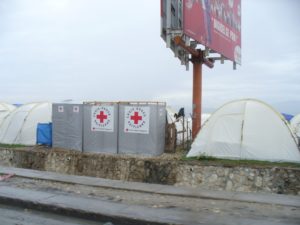 However, if one backed up and photographed  the rest of the scene, these two tents sat between the most horrendous collection of  home-built shelters, featuring garbage bags, bed sheets, cardboard, a few pieces of corrugated metal and other debris.

This would have been a funny photo, had the results not been so horribly  disgusting.

Haitians have been screwed by the foreign ONGs, ready to make fortunes for themselves, while sharing a small percentage with the Haitian victims.

In any other line of business, this would be fraud and those responsible would be placed in jail.

Unfortunately, custom and practice, in the ONG world, would be an indictable offence elsewhere in our society.

We have also seen that it is legal to spend millions on a humungous series of “studies” to see what is required, then do nothing with the studies.

Haiti, and the Haitians are waiting, but what are they waiting for?

Perhaps their only gift will be  disastrous hurricane to supply a coup de  grace.