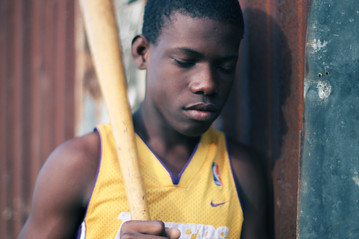 David Darg and Bryn Mooser live and work in Haiti. They are the co-directors of the documentary “Baseball in the Time of Cholera,” which premieres today at the Tribeca Film Festival.

“Baseball in the Time of Cholera” is a film documenting the tragedy of Haiti’s cholera epidemic through the eyes of a young baseball player. The film was originally going to be a documentary on the emergence of Haiti’s first little league baseball team. When the mother of one of the players suddenly died of cholera, however, we knew we had to completely shift the course of the film and tell a much more important story.

We spent months working in the tent camps after the 2010 earthquake in Haiti and got to know the families and kids in those camps well. In 2010 in addition to providing basic relief supplies like clean water and food, we decided to bring something fun to the camp for the children. There were about 30 boys and they were troubled kids; they had lost their homes and many had lost their parents as well. They would wander the streets of Port Au Prince begging for money from aid workers, visiting doctors or UN soldiers.

It was about a year after the earthquake when we purchased a couple of bats, some gloves and some balls and formed the boys into Haiti’s first little league team. They named themselves the Tabarre Tigers after the neighborhood where they roamed.

Haiti is an interesting place to play baseball. There is no history of the game in Haiti yet the Dominican Republic, which shares the island, provides the U.S. with a large percentage of its MLB players. Haiti also was once the world’s largest manufacturer of baseballs. Big factories churned out baseballs that got shipped away before they got into the hands of the local kids.

Since starting out, a year and a half ago, the Tigers have been growing into a strong team. They have learned so much and get into less trouble nowadays and we make sure they all are in school. They have become our brothers and we are proud of them. Last year, Joseph Alvyns, the team captain, traveled to Toronto to throw out the first pitch at a Blue Jays v Red Sox game. Seeing him take the field was the proudest moment of our lives. From a tent camp to the top of the world.

As we coached the baseball players, their progress as a team was growing in parallel to the spread of this horrific disease in their country. We would spend our days working in cholera treatment centers and installing water purification systems in the fight against cholera and in the evenings our escape was to play baseball with the boys. Then one day, those two worlds collided when Joseph’s mother contracted cholera and died. We were all close to her. She worked with David’s wife on a jewelry project and it sent shockwaves through our community. Suddenly our film about the baseball team seemed almost insignificant. We also realized we had all this footage from our work with cholera in addition to our baseball footage, and we made the decision to expose the tragedy of this crisis with baseball as the narrative.

Our film aims to ‘put a face’ on the epidemic. Instead of lecturing that cholera kiled thousands of people, we want to show the viewer what cholera has done to one boy and his family. And most of all, we want people to realize that the cholera epidemic is not the fault of the Haitian people. It was brought to Haiti by foreigners and despite very clear evidence pointing towards the United Nations as the carrier, the UN still denies responsibility for the outbreak.

In its own report on the cause of the outbreak the UN diverts the blame to the Haitian people saying that “sanitation and healthcare deficiencies” were a primary factor in the crisis. This is as bad as accidentally dropping a land mine and blaming the victim for stepping on it.

The cholera outbreak is so widespread and Non Profit organizations are now stretched so thin that only the United Nations has the power and resources to finally put an end to the crisis. Through water and sanitation development and the improvement of medical infrastructure, cholera can be controlled and hopefully ended all together in Haiti. But the UN first needs to take responsibility – then allocate enough resources to take the lead, logistically and financially in the fight against cholera. Our film highlights the legal fight for the victims of cholera who have filed claims for compensation from the UN. It is a David v Goliath story, poor rural farmers whose lives have been torn apart fighting against the impunity and might of the UN.

To date cholera has claimed over 7,000 lives and infected over 500,000 Haitians — roughly 5% of the population. Now as the rains start up again, those numbers are expected to rise. In the U.S. we have seasons for our sports. As we enter baseball season in the US, in Haiti, cholera season is just getting started.

Our goal with the film “Baseball in the Time of Cholera” is simple: We want enough people to realize this injustice to collectively put pressure on the UN to do the right thing: take responsibility and put an end to Haiti’s cholera epidemic.