Two nephews of Venezuela’s first lady have been sentenced to 18 years in prison in the US after being convicted of trafficking drugs. The men are the nephews of Cilia Flores, Venezuelan President Nicolás Maduro’s wife.

Venezuela has accused the US of kidnapping the two men and framing them in order to undermine Mr Maduro’s socialist government.

Ms Flores is a member of Venezuela’s powerful constituent assembly and served as speaker of the National Assembly between 2006 and 2011.

Flores de Freitas and Campos Flores were arrested in Haiti in November 2015 by undercover US Drug Enforcement agents.

They were taken to New York, charged with drug trafficking offences and convicted a year ago.

Prosecutors said they men were in Haiti making arrangements to smuggle cocaine from South America to the US via Honduras.

Prosecutors had sought for a sentence of 30 years, which US District Judge Paul Crotty in New York said “would be excessive” as they had no criminal record.

The two men denied the charges before they were convicted by a jury in November 2016. 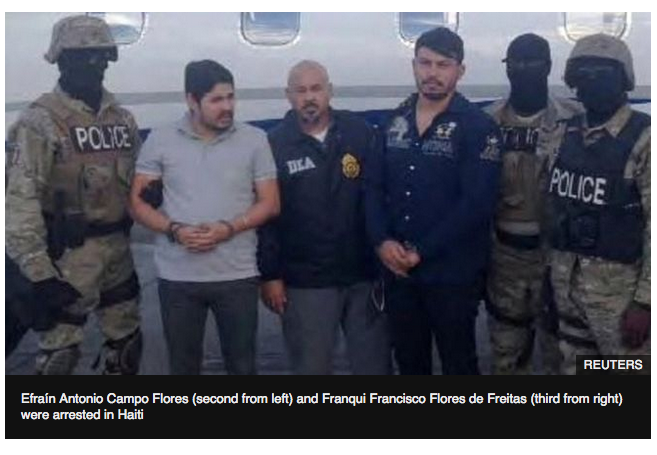 Earlier this year, they said in court that the alleged plot “could never actually have been executed”.

“Even in jail I tried to help those who were in a worse psychological situation than I find myself in.”

The case has caused further damage to already strained relations between the US and Venezuela.

A wave of anti-government protests in Venezuela left more than 120 people dead in the first half of the year.

Mr Maduro, who is in Cuba attending a meeting of regional leaders, has accused the US of leading a relentless campaign to destabilise left-wing governments in Venezuela and other Latin American countries.

He said the US was effectively imposing an “economic blockade” on Venezuela, which has for years suffered with high inflation, rampant violence and the shortage of basic goods.