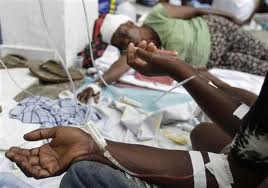 United Nations must admit its role in Haiti’s cholera outbreak

By Editorial Board, Published: August 16

ON THIS page Thursday, the spokesman for United Nations Secretary General Ban Ki-moon offered a response — or something closer to a non-response — to The Post’s editorial Sunday about the United Nations’ responsibility for, and response to, Haiti’s deadly cholera epidemic .

In a letter to the editor, Martin Nesirky, the spokesman, called attention to the United Nations’ wide-ranging and critically important work in providing aid and relief to victims of the cholera outbreak, to improving the country’s infrastructure so that it is less susceptible to such outbreaks in the future and to the pressing need for donors to open their wallets to help implement Haiti’s long-range campaign to eliminate the disease.

However, Mr. Nesirky pointedly ignored the editorial’s central focus, which is that the United Nations’ responsibility derives not only from its mission as a major humanitarian relief organization, but also from the growing body of evidence that the cholera outbreak originated with U.N. peacekeepers deployed to Haiti in 2010 following a devastating earthquake.

That is the conclusion of a range of experts, including a panel enlisted by the United Nations itself and, most recently, student researchers at Yale Law School and the Yale School of Public Health.

It may be the case that lawyers for the United Nations have forbidden the organization’s officials from addressing the topic or even mentioning the battalion of blue-helmeted Nepalese peacekeepers who are widely thought to have introduced the cholera virus into the nation’s largest river and main water supply.

Nonetheless, by refusing to acknowledge responsibility, the United Nations jeopardizes its standing and moral authority in Haiti and in other countries where its personnel are deployed.

In effect, the United Nations faces two important tasks to address the outbreak, which has killed more than 8,000 people and sickened well over 600,000, and it has undertaken only one. To its credit, the United Nations does seem to be pressing hard to help Haiti eradicate cholera and lesson the effect of the epidemic. And it is useful to remind donors, as Mr. Nesirky did in his letter, that just half of the $444 million goal has been met to fund Haiti’s anti-cholera program.

Yet without also speaking frankly about its own responsibility for introducing cholera to Haiti, the organization does a disservice to Haiti and Haitians, who deserve better.