“Haitians, U.S. taxpayers unable to verify how U.S. aid funds are being used on the ground” 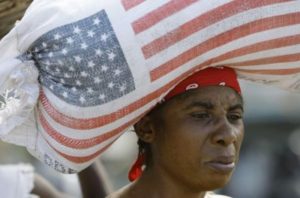 A new report from the Center for Economic and Policy Research (CEPR) identifies significant problems with the delivery of U.S. aid in Haiti and finds an overall lack of transparency on how the billions of dollars obligated for U.S. assistance to Haiti are being used. The report, “Breaking Open the Black Box: Increasing Aid Transparency and Accountability in Haiti,” by CEPR Research Associate Jake Johnston and Senior Associate for International Policy Alexander Main, examines the effectiveness of U.S. assistance to Haiti, how it is being administered, to what extent it is adhering to the “USAID Forward” reform agenda and what steps can be taken to ensure its more effective and transparent delivery.

“Billions in U.S. aid money are going to Haiti with little transparency to ensure that it is being used effectively,” paper co-author Jake Johnston said. “The situation for many people in post-quake Haiti is especially daunting, but for USAID it has been business as usual. No care has been taken to ensure that U.S. taxpayer dollars are being best utilized in Haiti.”

The report notes that the few audits and evaluations of USAID’s programs in Haiti since the earthquake present a “troubling picture of the manner in which U.S. relief and reconstruction efforts have been conducted so far.” Contractors have hired far fewer Haitians than promised, Haitian businesses were largely excluded, goals were not met, there was inadequate supervision of grantees, and USAID had not conducted internal financial reviews of contractors.

The paper shows that of the $1.15 billion in contracts and grants awarded since the 2010 earthquake, over half went to the top 10 recipients of global USAID awards, with the largest recipient being the for-profit company Chemonics International Inc., the single largest recipient of USAID funds worldwide aside from the World Bank and U.N. Meanwhile, just 0.7 percent of USAID awards have gone directly to Haitian businesses or organizations.

Much of the lack of transparency has to do with the scant information available on subawards – the subcontracting done by the direct recipients of USAID awards. Of the $540 million in contracts awarded by USAID, only one of them, MWH Americas, has reported any information on the use of subcontractors to the USASpending.gov database. Among grantees, only five have reported sub-grant data.

The paper notes that despite USAID’s “Forward” reform agenda, the agency has blocked disclosure of additional information, including through Freedom of Information Act requests.

The paper makes several recommendations for how to improve transparency and accountability around the $1 billion in outstanding obligated U.S. aid funds for Haiti, as well as around any additional aid funding in the future. These include making data available on subcontractors; ensuring awardee compliance with federal regulations and contract requirements; reducing reliance on large, multi-year contracts that favor traditional partners while increasing direct contracting to Haitian entities; strengthening USAID’s capacity to carry out effective monitoring and evaluation of assistance programs; making all evaluations publically available; ensuring the involvement of local populations; and making all available information on assistance programs accessible to Haitians – including via translations to Haitian Creole.

“Without transparency, not only is it impossible for U.S. taxpayers to know what is being done with their money, but the Haitian government and the Haitian people have little opportunity to ensure that U.S.-funded projects actually assist Haiti in rebuilding and dealing with ongoing urgent humanitarian needs,” paper co-author Alex Main said.

USAID has always been one of the most dysfunctional operations in Haiti.

It would be useful to have American firms benefit from projects they initiate but – as often as not – these concepts are continued, under foreign control.

Take, for example – a situation in which the Haitian Supreme Court/CEP needed a damaged building revived for use in the old military academy at Freres. An American group did all of the design work, with no money up front. USAID then gave a contract to a French firm that now draws $80,000 American dollars for following up, on this concept, around the country.  The fact that these ongoing projects cost an average of 45% more than what the Americans suggested indicates gross stupidity, or, the cynics would suggest, some sort of payback.