It seems there is a renewed effort to cast all of Haiti’s problems as those of the horrible West continuing to practice colonialism. A fresh batch of WikiLeaks cables have been analyzed by the Council of Hemispheric Affairs, See: http://www.coha.org/wikileaks-cables-show-haiti-as-pawn-in-u-s-foreign-policy/ which concludes that US efforts to interfere in the Venezuela oil deal and keep Haitian wages low are merely an extension of exploitative colonialism. This is beyond absurd particularly when the charges are leveled at President Obama’s Administration.

First, the article discusses the Petrocaribe deal in which the US, on behalf of Chevron and ExxonMobil, attempted to scuttle an oil deal with Venezuela that would allow Haitians to buy oil at a much-reduced price. They attempt to cast the US as the bad guy for advocating interests and not presenting a fair deal. What would be the problem with Preval negotiating a better deal with the US? Preval had no interest in that. Yes, the Petrocaribe deal allowed Haiti to buy oil much more cheaply. Preval then gave the importation monopoly to an elite business cartel, known as the Groupe de Bourdon, which turned around and sold the oil at the same price. They did not pass on any of the savings. They claimed that the additional profit would be invested in social programs. It never was. President Preval is suspected to have personally benefitted from this deal to the tune of $463 million in pilfered profits and kickbacks. How did that benefit the Haitian people?

Second, the article outlines US efforts to undermine Preval’s efforts to raise the minimum wage in Haiti from 24 cents and hour to 61 cents. They note that Hanes, Fruit of the Loom and other garment manufacturers threatened to pull manufacturing jobs from the country given the high increase. This is a clearly a much more difficult issue to manage. Haiti is in a tough situation given the global context. As China moves up the manufacturing value chain, there is enormous opportunity for developing countries to compete for that capacity. Bangladesh and Vietnam have equally low wages. Haiti’s leverage is low cost labor and proximity to the US. Clearly wages need to rise in Haiti, but Preval went about this with his usual lack of strategy and delivered another loss to the Haitian people. There is a tripartite commission in place with representatives of the Haitian government, industry and labor unions. This mechanism was set up to tackle the wage issues and other labor issues, but was never used, and likely could have been a good tool for building consensus before rushing to legislate. Further, Haiti could do a lot better in its trade agreements. Preval should have thought about this problem more comprehensively and should have pursued and aggressive trade agenda to reduce barriers and make Haiti a more attractive destination for foreign companies. He failed to take any action on a trade agenda.

Finally, the article provides flawed analysis on the corrupt 2010 elections. They note that donor countries and international organizations knew the elections were flawed but blessed the results in the interest of moving forward. The article does not mention that the people revolted, which resulted in OAS being invited in to do a recount. They mention that Martelly was elected with only 23% of the vote and attribute the low turnout to the exclusion of Aristide’s Fanmi Lavalas. What about the 1% turnout in the 2000 elections in which Aristide won 83% of the vote? Seems that turnout was significantly lower despite the “popular” Lavalas party’s participation? People did not turnout because of threatened violence and because of the complete and utter fraud in the first elections. Further, the international community only addressed the Presidential elections allowing the fraudulent Parliamentary elections to stand, which has resulted in political deadlock today, see: http://solutionshaiti.blogspot.com/2011/07/inites-deadlock-last-ditch-effort-to.html

Surely the partisan Electoral Council (CEP) excluded Lavalas in an effort to secure victory for Preval’s INITE coalition, but for once, they used a legitimate and legal reason. Aristide refused to certify paperwork allowing his party to participate. This was not a paperwork snafu as the article leads us to believe. Further, they excluded several Lavalas candidates directly linked to drug trafficking, corruption and murder. This is one case in which the CEP acted legally – albeit partisan.

The article concludes with the absurd assertion that, “Based on these cables, we see a disturbing image where U.S. foreign policy is shaped by the interests of the rich and is geared toward underhanded interference in the affairs of other nations.”

For one, this is an unbelievably absurd accusation to level against the Obama Administration. The debates over raising taxes in the US right now directly contradict this assertion. But more importantly, this analysis portrays Haiti as a victim. All of Haiti’s problems are the fault of evil Western countries. In reality, Haiti cannot blame other countries for its problems. The US – and every other country around the world – acts in its self-interest, and, not surprisingly, advocates the interests of its companies. It is the job of the Haitian Government to defend its interests globally. But Preval and his cronies were too busy advancing their own interests to bother with advancing their country’s interests. Haiti is ranked one of the top four more corrupt countries in the world. Does that not have something to do with the dire poverty? Duvalier pilfered $600 million from Haiti’s coffers. Aristide pilfered $350 million, and Preval pilfered $463 million. Might that not have something to do with Haiti’s problems? The Haitian people generally blame a predatory, incompetent and corrupt government for its problems. 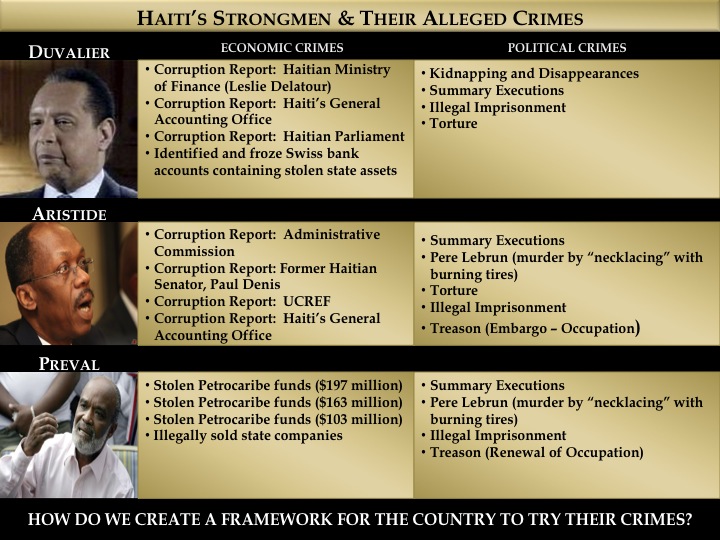 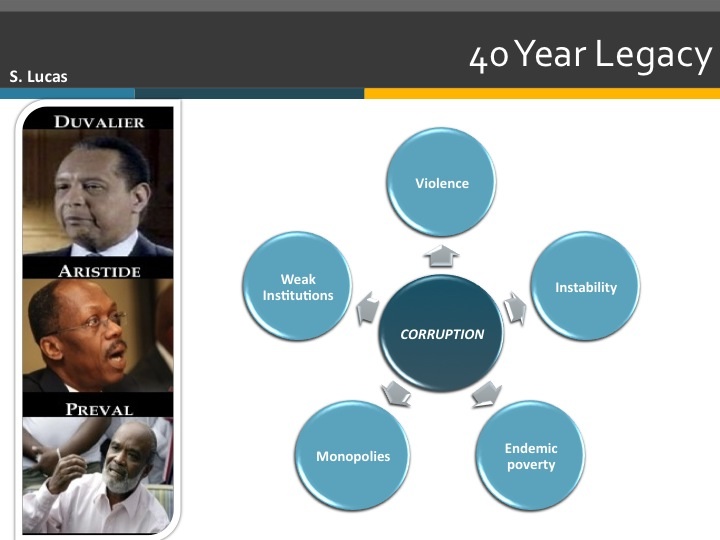