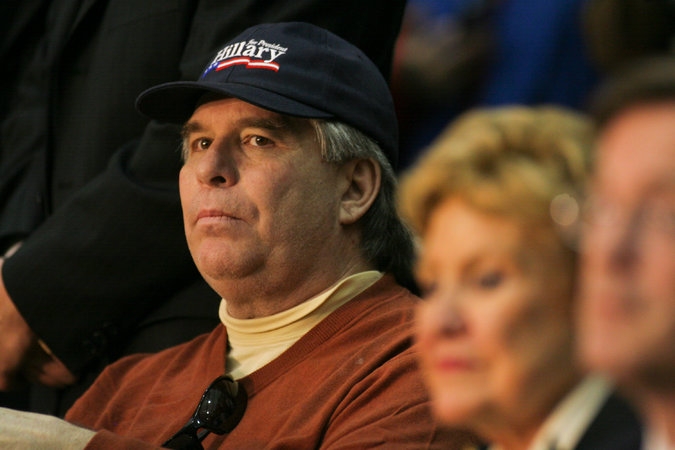 Tony Rodham in 2008. For decades he has tried to use his connections with his sister and her husband to further his pursuits. Credit Jessica Kourkounis for The New York Times

The heavyset 60-year-old man who walked with a cane seemed an unlikely speaker at the glamorous launch party for a cosmetics company held in Santa Monica, Calif., in March.

But Tony Rodham appeared at ease among the special guests and well-heeled investors, offering them encouragement as well as an invitation.

“If there’s anything I can ever do for any of you, let me know,” Mr. Rodham said. “I’ll be more than happy to do it.”

A promotional video of the party that the cosmetics company later released identified the speaker as “the youngest brother of former first lady Hillary Rodham Clinton,” a relationship that has been Mr. Rodham’s calling card since the days of the Clinton White House.

On and off for two decades, the affable Mr. Rodham has tried to use his connections with his sister and his brother-in-law, former President Bill Clinton, to further a business career that has seen more failures than successes. The connections to the Clintons have given Mr. Rodham, a self-described “facilitator,” a unique appeal and a range of opportunities, like addressing Chinese investor conferences and joining an advisory board of a company seeking permission to mine for gold in Haiti.

But his business dealings have often invited public scrutiny and uncomfortable questions for the Clintons as Mr. Rodham has cycled through a variety of ventures, leveraging his ties to them and sometimes directly seeking their help.

When Mr. Clinton worked as a co-chairman of Haiti’s earthquake recovery commission, Mr. Rodham and his partners sought a $22 million deal to rebuild homes in the country. In court proceedings three years ago in an unrelated lawsuit, Mr. Rodham explained how “a guy in Haiti” had “donated” 10,000 acres of land to him and described how he had leaned on Mr. Clinton to get the rebuilding project funded amid bureaucratic delays.

“I deal through the Clinton Foundation. That gets me in touch with the Haitian officials,” Mr. Rodham said, according to a transcript of his testimony. “I hound my brother-in-law, because it’s his fund that we’re going to get our money from. And he can’t do it until the Haitian government does it.

But Mr. Rodham was able to prevail on the former president for help in other ways.

When Mr. Rodham was short on cash in 2010, Mr. Clinton helped get him a job for $72,000 a year raising investments in GreenTech Automotive, an electric car company then owned by Terry McAuliffe, an old friend of Mr. Clinton’s and now the governor of Virginia.

“I was complaining to my brother-in-law I didn’t have any money. And he asked McAuliffe to give me a job,” Mr. Rodham said during the court proceedings, which were the result of a lawsuit over unpaid legal bills filed by his lawyer in a child support case.

A brother down on his luck seeking help from more successful siblings is a familiar story, and presidents and their families have hardly been immune from that sometimes uncomfortable situation. For the Clintons, Tony Rodham has not been the only source of embarrassment.

Mrs. Clinton’s other brother, Hugh Rodham, stumbled through an unsuccessful campaign for the Senate in Florida during Mr. Clinton’s first term. Roger Clinton, the former president’s half-brother, served a year in federal prison on a cocaine distribution charge. And all three were involved in lobbying Mr. Clinton for pardons for their associates as he left office, prompting a congressional inquiry.

“They’re all colorful,” Rahm Emanuel, a former Clinton aide who later became mayor of Chicago, said in an interview in 2001. “They’re all living large.”

As Mrs. Clinton began her 2016 campaign for the presidency, Hugh Rodham and Roger Clinton had faded from public view, but Tony Rodham emerged as a controversial figure. A government investigation in March found that GreenTech, which sought green cards for its Chinese investors through an American government program, had received special treatment in the handling of its visa applications. The report described instances when Mr. McAuliffe and Mr. Rodham contacted an official from the Department of Homeland Security to complain about the pace of the visa process.

Mr. Rodham’s unsuccessful pursuit of housing contracts in Haiti, which has not previously been reported, raised new questions.

As Mrs. Clinton campaigns, she speaks fondly of her brothers. At a stop in Iowa, she recalled them working together at her father’s drapery business. Her official campaign biography prominently mentions them.

“She loves her family more than anything,” said Nick Merrill, a spokesman for Mrs. Clinton. “Her brothers have always been there for her, and she will always be there for them. Each, though, have their own lives, their own jobs, their own ups and downs.”

As the youngest of three children, Tony Rodham has lived in the shadow of his sister. He never finished college, and he worked at a variety of jobs — as a prison guard, private detective and at the Democratic National Committee — until after the Clintons were in the White House, when he became a consultant and deal broker. He was once married to Nicole Boxer, the daughter of Senator Barbara Boxer of California.

He lives with his second wife, Megan, and two young children in a large house on a hill in Vienna, Va., a suburb of Washington. He declined to speak to a reporter who went to his door one afternoon in April, and he did not respond to other messages seeking comment for this article.

But in a statement from Mr. Rodham passed on by the Clinton campaign, he said that he wanted to protect his family’s privacy and that he would not engage in disputing claims about him, which he said he considered to be political attacks.

His wife said the family was excited about Mrs. Clinton’s campaign for president.

“The kids love their Aunt Hillary,” she said. “We are supportive, and we are excited.”

Mr. Rodham described his dire financial situation during the court proceedings in 2012. As a result of a series of failed business deals — including some in oil and gas, water, housing, tutoring and pharmaceuticals — he said he had not made a mortgage payment in 10 months and was fighting home foreclosure.

The Clintons, he said, had been generous, even paying for his son’s schooling, but they were not going to give him more money. “Hillary and Bill are done,” he said. “I mean, look at what they’ve done for me. They’ve given me money all the time.”

Mr. Clinton’s willingness to assist in getting him work with Mr. McAuliffe was helpful, Mr. Rodham said, but at $6,000 a month, it was not enough. “It’s kind of like the job he got me a long time ago when I worked in the prison,” he said.

Even more important, according to Mr. Rodham, was what he said was going to be Mr. Clinton’s help on his Haiti rebuilding project. That project came about when Sheldon Drobny, an old friend, contacted Mr. Rodham about making a connection for a Chicago-area contractor, who wanted to become involved in building houses in Haiti.

“We were trying to help. Period,” Mr. Drobny, a co-founder of Air America Radio, the former liberal talk network, said in a phone interview. He called the effort “humanitarian.”

Mr. Drobny said he had connected with Mr. Rodham because of what he believed were his ties to the Clinton Foundation, which was playing a central role in the rebuilding efforts. Ultimately, he said, nothing happened “because the Haiti government was not cooperative.”

The Clinton Foundation said in its statement that aside from supporting a housing exposition in Haiti, it had not been directly involved with any housing projects. The foundation also said Mr. Rodham’s project had not been among the more than 300 submitted for consideration at the expo.

Mr. Rodham projected that he could make $1 million on the Haiti deal if it came to pass — enough money, he said in his court testimony, to take his family to Disney World and cover his debts, including his legal bills and his long overdue federal taxes.

Mr. Rodham eventually settled his bill with his former lawyer, Gwendolyn Jo M. Carlberg. Ms. Carlberg said in a phone interview that, despite her lawsuit, she did not have a negative view of Mr. Rodham. “I found a lot of good in Tony,” she said.

He is still sought after for deals and personal appearances.

That was the case in March when Mr. Rodham attended the celebration of Wynn Beauty & Health in Santa Monica, which included a performance from an “American Idol” contestant. In addition to appearing in the promotional video, Mr. Rodham posed for at least a dozen photos.

But after a reporter contacted Wynn Beauty & Health, Mr. Rodham was removed from the video and photos of him disappeared from the company’s Facebook page. In an email, the company said that Mr. Rodham was not involved in the business and that he had appeared at the celebration only as a longtime friend offering congratulations.