Can using blockchain to verify cotton as organic help revive the industry in Haiti? 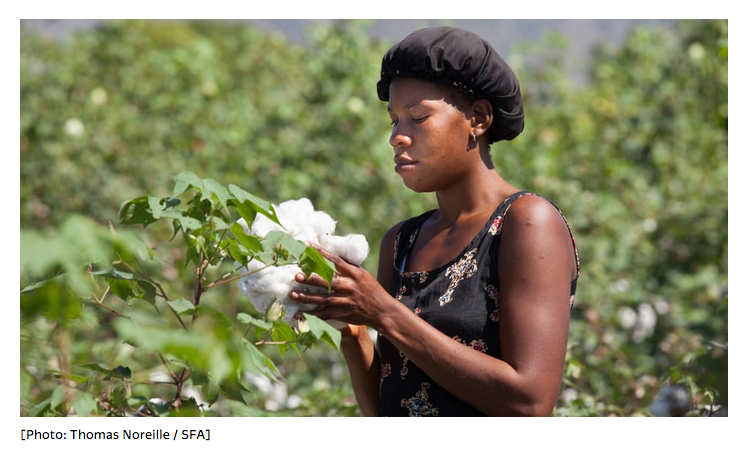 Haiti hasn’t grown cotton in decades. Its once-abundant industry collapsed in the 1970s due to government corruption, economic mismanagement, and U.S. embargoes. But now, thanks to a project involving thousands of smallholder farmers, apparel brands like Timberland, and a blockchain network, it could be set for a comeback. Within a few years, if all goes to plan, the island will be supplying millions of pounds of organic cotton for shoes, shirts, and other clothing sold in U.S. stores.

The Blockchain Cotton Project in Haiti is one of several around the world looking to use a distributed digital ledger for supply chain management. The same technology that tracks transactions of bitcoin and other cryptocurrencies can also track commodities and products as they leave fields and move through factories and distribution centers. Blockchains have the potential to boost transparency and lower the cost of authenticating the origin of products, particularly those of an organic and fair trade variety, say supply chain experts.

Smallholder Nerlande Dautarn holds a basket of cotton she and other farmers harvested at the Smallholder Farmers Alliance (SFA) cotton field trial site near Gonaives, Haiti. [Photo: Thomas Noreille / SFA]“The promise of blockchain is that we can trace the purchase back to the farmer and the field. That not only increases the visibility of our supply chain but also enables us to share more robust stories with our consumers,” says Atlanta McIlwraith, Timberland’s senior manager for community engagement and relations, in an interview.

The blockchain project is led by the nonprofit Smallholder Farmers Alliance (SFA) and isn’t the first that Timberland has been involved with on the island. Starting in 2010, Timberland, the SFA, and the Clinton Global Initiative started planting millions of trees across 19 nurseries, hoping to avert serious deforestation. They encouraged farmers to tend to the trees by offering “tree currency”: seeds, tools, and training that allow farmers to increase their own yields. The project has doubled household incomes, according to the SFA, and is now self-sustaining without corporate sponsorship. The trees produce enough seeds to create recurring seed banks, as well as food, like moringa, a “superfood” which is sold to a company in California called Kuli Kuli.

In 2015, the SFA and Timberland started exploring the idea of the brand becoming not just a sponsor of Haiti’s agriculture, but also a customer. Cotton was the obvious candidate, as it had been grown there before. “We were thinking about what sustainability looks like for smallholder farmers,” says Hugh Locke, cofounder of the SFA. “They said, ‘you know, it’s been great sponsoring you guys, but what if we became a client?’ We felt that was a better basis for sustainability in the long-run because it creates a market.”

Timberland has committed to meeting up to a third of its global cotton needs from Haiti–2,750 metric tons a year–assuming the project can meet quality and cost targets. The SFA recently planted the first cotton trees using funding from Timberland and Vans, which is part of the same retail group, VF Corporation (Patagonia has also expressed interest in being involved). Better Sourcing Program, a supply chain technology provider, and RCS Global, a supply chain advisory firm, are helping to develop the concept, along with students from Columbia University’s School of International and Public Affairs. For now, the project only involves a handful of farmers, but, once ramped up, it could see up to 17,000 onboard within five years, Locke says.

Blockchains create permanent ledgers of transactions as they occur. They are viewable and updatable by multiple parties who join together to ensure the record is accurate. As such, Locke hopes the system will help to cut the cost of certifying Haiti’s cotton as organic–for instance, proving that no pesticides were used during growing and harvesting. Rather than outside inspectors coming in and certifying farms one by one, the system will instead allow farmers to create their own consensus version of the authentication process.

“Most systems for tracking input and outputs, yields and net profit are very expensive and proprietary,” Locke tells Fast Company. “We want something open source. We’re still figuring out how the farmers do the live reporting. But we hope it will replace the normal organic or fair trade certification through a radical transparency approach.”

McIlwraith sees an opportunity in blockchain to improve the way brands talk about their products. She says many consumers want to purchase from companies that take a stand on social issues like ethical sourcing.  Blockchains can open up supply chains and potentially take consumers down to the farmer level, by proving products have arrived in-store as advertised.

“Consumers want to purchase from brands that they trust and one of the things that helps build that trust with consumers is this transparency and the ability to tell stories about your product that aren’t just fizzle,” McIlwraith says. “They want real stories about real people and this help makes our products more relatable.”

Ben Schiller is a New York staff writer for Fast Company. Previously, he edited a European management magazine and was a reporter in San Francisco, Prague, and Brussels.