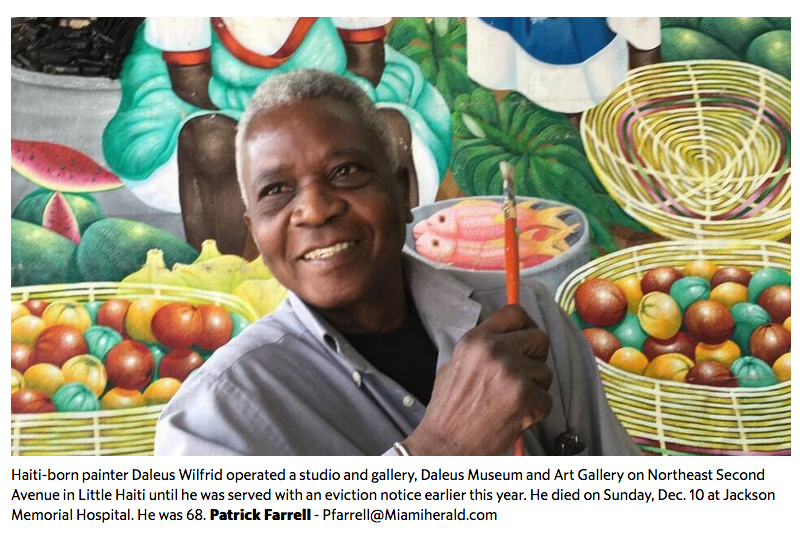 From the glass walls of his hidden Little Haiti art gallery overlooking a changing streetscape, Joseph Wilfrid Daleus dreamed of the day deep-pocket tourists and well-heeled art collectors would discover his work, walk in and buy his pricey paintings.

Finally, he would get the recognition he deserved, Daleus told friends, and the decision to relocate his studio and gallery from North Miami to Little Haiti to take advantage of a rejuvenating neighborhood would finally pay off.

But the art collectors and the reservoir of tourists never came. And on Sunday, after weeks of battling diabetes and respiratory issues at Jackson Memorial Hospital, the Haiti-born painter, whose vibrant indigenous paintings reflected what Cuban writer Alejo Carpentier termed “marvelous realism” in Haitian art, died. He was 68.

The community has lost a great artist,” Raymonde Jouissance, who considered Daleus to be more like her uncle than a cousin, said as she confirmed his death. “He cared a lot about the Haitian culture. He was living here but always thinking like he still lived in Haiti. He brought his paintings and art not only to the United States, but [recognition] internationally.”

Daleus’ death came on the same day as that of another Haitian cultural icon — political folk singer and activist Joseph Emmanuel “Manno” Charlemagne — and months after the painter was forced to close the doors of his Daleus Museum and Art Gallery at 5910 NE Second Ave., leading one longtime friend to surmise that he died of “heartbreak” and another, that he was the victim of gentrification.

“We consider his death as the first victim of gentrification of Little Haiti,” said Marleine Bastien, a community activist now working on fulfilling one of Daleus’ last requests by trying to get U.S. visas for two of his daughters so they can travel from Haiti to attend his funeral. “Daleus had an amazing amount of pressure placed on him because the rent kept going up.”

In a 2015 interview with the Miami Herald, Daleus complained that he was being forced out of Little Haiti amid real estate developers and speculators buying up land and pushing out the small businesses that give the neighborhood its distinct Caribbean flavor.

“They tried to push me out of this area,” he said. “The price goes up every month, and I don’t have the support to stay. … But I don’t want to go. I want to stay.”

Bastien said her Haitian Women of Miami/Fanm Ayisyen Nan Miyami community organization had taken Daleus on as a client, trying to help him with his rent problems. She said he really wanted to contribute to Little Haiti, where he decided to relocate about four years ago after 15 years in North Miami.

“He was promoting Haitian culture, diversity, inclusiveness and Haitian art,” added Bastien, calling Daleus’ death, like that of Charlemagne, “a big loss” for Haiti and South Florida’s thriving Haitian community. “He fought so hard, and many people fought with him. But in the end the landlord and developers won.”

“We worked with him being behind on his rent for four years,” said Dahan, who said that while Daleus, who drove around in an antique convertible, was under an eviction notice, he voluntarily emptied his gallery and moved. “I really don’t want to comment. I want him to rest in peace.”

Teddy Pierre-Louis, a Little Haiti broker and co-founder of Downtown Little Haiti Stakeholders, said he had reviewed Daleus’ rental agreement and there was nothing unusual with it. Pierre-Louis suspects Daleus’ payments were going up because he kept falling behind in his rent. Daleus, whose work graces the parking lot wall of the Little Haiti Cultural Complex, was a victim of bad business decisions rather than a neighborhood transformation, Pierre-Louis said.

“He moved to Little Haiti to take advantage of the plan the Little Haiti Cultural Complex had in store for the community with the Caribbean Marketplace,” Pierre-Louis said. “The city of Miami, after the grand opening, did not give the cultural complex the proper budget to make the marketplace a successful venue, so ultimately, it failed the community and also Daleus, who made business decisions based on the plans the city had.”

Jan Mapou, whose Haitian bookstore, Liberi Mapou, sits directly across the street from Daleus’ former gallery space, said his longtime friend suffered a lot. Despite his paintings gracing the walls of several galleries, and reportedly the homes of luminaries such as former Secretary of State John Kerry, Daleus struggled to pay his monthly rent of about $1,600, friends said.

“He didn’t even make $600 a month” selling his paintings, said Mapou, who tried to counsel him to have a liquidation sale of his artwork, which ranged in price from a few hundred dollars for copies of originals to tens of thousands of dollars for originals. But the artist with the beautiful smile and stubborn streak, refused.

“He had a sentimental attachment to them. Even after he sold a painting, he still talked about it as if it were still there,” Mapou said. “He really believed in himself as an artist.”

To try and help him out, Haiti’s Miami consulate bought two pieces, but Daleus complained to friends that even the Haitian government had problems paying.

With the eviction notice hanging over his head, Daleus moved out three months ago and put his prized paintings in storage, Mapou and his cousin said.

“He died of heartbreak,” said Mapou. “He died of misery and from a lack of comprehension from people who could of helped him by buying his paintings but they didn’t help in that sense. … He had a lot of economic difficulties.”

Dr. Rudolph Moise, whose relationship with Daleus dates back 50 years, was a huge supporter and is one of the biggest collectors of his works.

“Every time he needed money, he would turn to me and I bought the paintings just to support him,” Moise said. “He’s a very good artist. … He had great vision.”

Born in Port-au-Prince, Daleus had no formal art training and began painting at age 10. He earned a reputation not only for his vibrant depictions of Haitian life, but for the versatility he showed and ability to make images look like they were dancing off the canvas through his layering technique. Describing his versatile style, which included surrealism, primitivism and realism, in a 1991 Herald interview, he said: “Each time I see something new, something that comes from another culture, it inspires me to do new things.”

Daleus immigrated to Miami from Haiti in 1988. Two years later, he opened Art Gallery Daleus at 715 NE 79th St. in Little Haiti. The space wasn’t just a place for art, but a meeting place for a new generation of young Haitian artists looking to break the mold of primitive Haitian art and set themselves apart from the masters.

After a reporter during a 1990 Herald interview noted that his work ranged from Vodou ceremonies to a portrait of a native American Indian, Daleus said: “The reason each of my works seems to be different is because when I started to paint in Haiti, the owner of the gallery in Haiti wouldn’t allow the artists to express themselves. I never wanted that.

Babacar M’Bow, an expert on Haitian art and the former director of North Miami’s Museum of Contemporary Art, said that Daleus became a master in his own right, and that his paintings — despite not getting the price he commanded — are valuable. Unlike other Haitian artists who tapped into modernism and contemporary art, Daleus displayed the tradition of indigenous Haitian art to give rise to what Cuban writer Carpentier called the “marvelous realism.”

“Daleus has always kept that tradition and was never influenced by trends,” M’Bow said. “He never attempted to change his paintings to fit the moment. He always made the moment fit the painting, contextualizing through his paintings a tradition with style.”

Jouissance says funeral arrangements for Daleus are pending. She’s trying to track down his son, while Bastien, the community activist, is working on trying to get the U.S. visas for his daughters. Meanwhile, the Little Haiti Cultural Complex, 212 NE 59th Terr., will pay homage to him and Charlemagne during its free monthly Sounds of Little Haiti musical showcase from 6 p.m. to 10 p.m. Friday.

“Two cultural icons have died,” Bastien said. “It’s such a big loss … when we have iconic figures who were forced to fight in a foreign land when they should have been in Haiti educating the young and transferring their knowledge.”