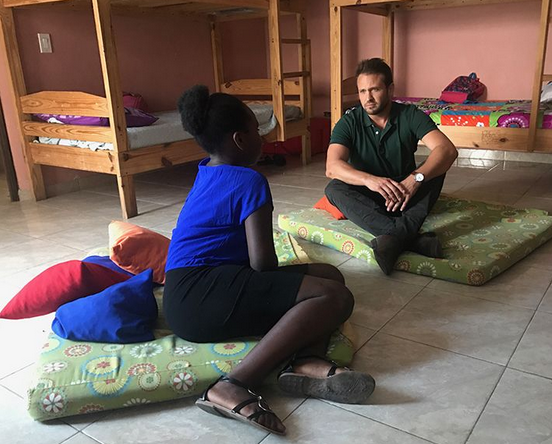 “WHO is afraid of the water?”

The question, from a former special agent with the US Department of Homeland Security, is directed at a group of children being held against their will in a rusted home hidden in the hills of Petion-Ville, in the republic of Haiti.

The undercover human trafficking operative produces an iPhone, and shows the children an image of a luxury yacht, moored nearby in the Caribbean.

There’s a moment of awkward laughter, before, gradually, a few tiny arms shoot up in the air.

“Wi, wi,” they say in Creole, explaining that they’re scared.

With us are a dozen children, who’ve been released by their captors from locked rooms at the back of the property. They are aged between eight and 14 years old.

They are sex slaves.

Their madam tells me that many of their customers are western humanitarian workers who’ve come here to help rebuild Haiti after the recent run of natural disasters.

One of the little girls tightens her ponytail and checks her lipstick in the reflection of the madam’s sunglasses. Her T-shirt logo reads, ‘Viv lavi a mande’, or, ‘Live life to the fullest’. She sneaks a look over her shoulder at a member of the Haitian cartel who is doing a terrible job of concealing a machete.

The children are told that we are a planning an underage sex party for a group of wealthy Americans and Australians.

The undercover agents I am with explain to the traffickers that the party will take place on their yacht, which has been sailed over from Miami and is now anchored off a beach resort on a spectacular stretch of Haiti’s northeast coast.

In reality, this meeting is part of an elaborate, multi-agency bust that has been almost a year in the planning — all done with the approval and co-operation of federal Haitian police.

A meticulous operation that began with the infiltration of the dark web, and that will culminate in the take-down of high-level Haitian traffickers linked to the abuse of hundreds of school-age children.

Many of them are traded, as though commodities, to rival gangs, and put up for sale or rent in filthy, underground Haitian brothels. Some are loaded into trucks or buses and smuggled across the border to be used by tourists in the Dominican Republic.

Foreigners with the appetite can buy an hour of their services for as little as a handful of Australian dollars.

I’m embedded with an organisation called Operation Underground Railroad, a group of ex-police and former CIA and Department of Homeland Security operatives who travel the world rescuing trafficked children.

“The problem in Haiti is an international crisis,” Ballard explains. “With so many children displaced or orphaned during the recent earthquake and hurricane, recruiters moved quickly to sweep these children up. And the worst part of it all is that in many cases the clients are the foreigners who’ve come here to help, the NGO workers and the so-called humanitarians.”

As our meeting with the traffickers ends, the undercovers set their trap. They give the criminals the time and place for the bust and agree to a price for the children’s services on the yacht.

Over the next week we will meet with the leaders of another five trafficking networks, often late at night in child brothels protected by heavily-armed guards.

“These places are dark and shadowy and the men who run them have virtually no respect for a human life,” Ballard tells me. There’s one way in and one way out … if they catch you filming, that’s when they pull the guns out. That’s when they realise you are better off dead to them than alive.”

Despite more than few tense moments, including several hours spent hiding out from suspicious gang members on the roof of a western hotel, each of the meetings ends safely.

And suddenly everything is in place: the traffickers have bought our story that we’re throwing a child sex party on our yacht, and they’ve agreed to deliver 30 children.

The victims think it will be just another day of abuse by men whose language they can’t understand. In fact, they are now just 24 hours away from being rescued.

Two brave Australians are among the rescue team on the ground in Haiti.

‘Pete’, is a father and a top paramedic. His colleague, ‘Vivienne’, is a mother of two and a former detective with more than two decades of experience.

They were recruited by Operation Underground Railroad for their skills as covert investigators. They can’t be identified for fear of reprisal attacks from traffickers with international tentacles.

“My role in the Haiti operation is to care for the children once the traffickers deliver them to beach resort where the sting will go down,’’ says Vivienne. “Keep them calm, keep them safe while the traffickers are given their cash, before the police move in. What goes through my head is the whole mother instinct; wanting to nurture them, give them a hug and say, it’s going to be OK. What’s gut wrenching is I actually don’t know if it’s going to be OK.”

Pete is on standby for any medical emergencies, to treat any injuries should the traffickers bring weapons or become violent when the SWAT team moves in for the arrests.

“You start to think, ‘OK, what if this was my child? How would I be? What would I feel?’ And it pulls you apart,” Pete says. “There’s a temptation for us at times, in our bubble in Australia, to dismiss this as someone else’s problem. We’re different cultures, different races, different countries, but we are all human beings.”

As word comes through that the traffickers and the children are now en route, we put the final touches on a series of hidden cameras and microphones, which will capture the evidence needed for the Haitian authorities.

The undercover team are ordered to the ground in the chaos of arrests.Source:Supplied

The plan is for the traffickers to meet with us out on the yacht, while the children are taken inside a hut on the beach. It’s vital for the legal case that the traffickers are recorded telling the agents how many children they control, and how much they will charge.

Once the traffickers arrive, the plan plays out to perfection. They’ve delivered exactly what they said they would, 30 children between the ages of eight and 16. They explain that their daily value is a little over $300 per child, and then they return to the beach to collect their cash.

A signal is given and Haitian police move in, guns drawn. Balaclava-clad detectives armed with assault rifles order the traffickers to the ground, and seize the envelopes of cash they’ve been handed as payment for the day’s services.

All told, nine traffickers end up in handcuffs, and 30 children are placed into the care of experienced trauma counsellors. The rescue team is now working directly with the Haitian president on the prosecution of the traffickers arrested.

For most of the children, this is their first taste of freedom in many years.

They’ve spent much of their young lives crowded into locked rooms with no windows, sleeping on concrete floors. The sad reality is that many have been given up for this life of abuse, by their own impoverished families. Children sourced in calamity, the pieces of their lives never quite coming together.

The safe houses where the children will be cared for seem at first glance like the saddest places on earth. With executions often ordered for girls set to testify, they are protected 24/7 by heavily armed guards.

As the first television crew ever allowed inside these top-secret compounds, we discover girls as young as 11, pregnant, or already raising children themselves. The heartbreaking product of rape.

But if you look beyond their scarred hearts and the dim lights of their eyes, you’ll find a place full of hope. Beautiful young Haitians with secret smiles and untold potential.

Trauma counsellors bringing kids who’ve lived through an infinitude of suffering, back to life. They have medical treatment, and the opportunity to go to school.

Maria Atkinson runs Jasper House, a refuge for survivors in coastal Jacmel. She’s a volunteer who abandoned her life of privilege in America, to dedicate her life to these children.

“These are the world’s forgotten children. The ones who have fallen through the cracks,” Maria tells me as we watch the children dance and sing during an afternoon art class. “They have been beaten down, and abused, and made to feel worthless, but nothing in the world is more rewarding than when you see the light come back into their faces. Their resilience totally blows me away. They have been through more than we could ever imagine, and yet they find a way back.”

For the Aussies involved in this rescue, the biggest child trafficking bust in Haiti’s history, there’s little time to pause and celebrate.

“It’s like pushing on the chest of Haiti,” Pete tells me as we watch the traffickers being led away to prison. “It’s like saying, ‘Hey, you have an enormous problem here, but we are with you and we are ready to help’.”

And with more than five million children enslaved worldwide, Operation Underground Railroad certainly needs the help. In fact, human trafficking now rivals guns and drugs as one of the fastest-growing crimes in the world.

There’s a temptation here in Australia, half a world away from Haiti, to think, ‘this is not our country, these are not our children, this is someone else’s problem’.

Pete and Vivienne are pleading for a different perspective.

“It takes some engagement to say, ‘no, I’m more than just Australian. I’m part of this’. Borders and boundaries mean nothing when you look into the kids’ eyes,’’ Pete says.

For Vivienne, helping is the human thing to do: “These are children, and if they don’t have anyone, they are all of ours. To sit back and do nothing is not something we were wired to do.”

Matt Doran is a reporter with Seven’s Sunday Night. He has reported on human trafficking in the Philippines, Myanmar, Thailand, America and Mexico. His reports have been recognised by the United Nations. His investigation airs tonight on Seven’s Sunday Night at 7:00pm. To help support OUR’s global rescues, visit: ourrescue.org

These types of sting have been initiated in the past, with lots of publicity, only to be followed by the release of criminals involved.

In Haiti, you can get away with murder if you have the cash to buy your way out of trouble.

When caught, these child exploiters should be shot!

Sounds bad to the coddled  mentalities in America but really the only solution to many problems.