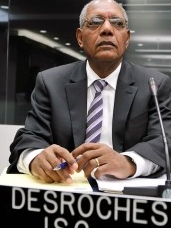 He was very critical of President Martelly’s removal of Prime Minister Laurent Lamothe. Desroches pointed out that the Martelly/Lamothe team presented a cohesive, effective, respected team with a number of positive goals to create business in Haiti, and coordinate elections.

The Civil Society is pressing for elections but Desroches doesn’t believe Evans Paul is capable of coordinating a ballot. Evans Paul promises only chaos.

His answers, and comments suggested that Laurent Lamothe was/is the only realistic candidate for the Presidency and opposition groups offered little.

He went on to say that Evans Paul cannot handle the situation.

What is the answer?

Anything is possible in Haiti.