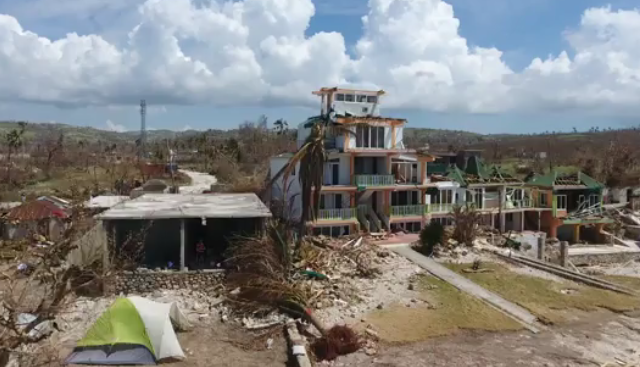 The almond trees have been stripped bare, and the tropical palms and royal poincianas that once brought life to the now eroded seaside oasis are all but gone.

The only thing familiar about the long stretch of Pointe-Sable beach in Haiti is its water, which is once more a clear blue-green, weeks after this section of the southwestern peninsula bore the brunt of Hurricane Matthew. The Category 4 storm sent a wall of seawater crashing through Port-Salut’s beachfront hotels, nightclubs and restaurants, gulping down everything in sight.

“Apocalyptic,” said Jean-Marie Chérestal, Port-Salut native, former prime minister and a hotelier whose 30-room inn at Pointe-Sable, Le Relais du Boucanier, suffered extensive damage from Matthew’s Oct. 4 winds and storm surge. “All of the vegetation, and every house that was constructed with [corrugated metal sheets] have practically all disappeared.”

Pausing, he struggles to hold back the tears. They flow anyway.

“I love Port-Salut,” Chérestal, 69, continued, detailing how he helped lead the transformation of the coastal city from a sleepy farming community west of Les Cayes in the late ‘80s to one of a handful of tourist destinations in Haiti, with its mountain view, clean beaches and air-conditioned, oceanfront rooms.

While Haiti’s capital of Port-au-Prince has attracted famous Americans such as Oprah Winfrey, Kim Kardashian and Bill Clinton with its lure of brand name hotels, Port-Salut, with its sandy beaches, cobblestone streets and natural charm, was about the Haitian diaspora.

Families such as the Leforts, who long ago migrated to the United States, returned regularly along with scores of others to celebrate Saint Dominique, the town’s patron saint, usually in August, while expats like hotelier Yanique Boursiquot invested after falling in love with the place during her missionary travels.

“Everyone is afraid. Everyone is stressed,” said Marie Jeanne Lefort, a Pembroke Pines resident, who had to come see “in order to believe” what she was hearing about the devastation to her hometown. “The slightest bit of wind, and everyone starts freaking out.”

Two years ago, Lefort’s older brother, Pierre Forges, a respected and well-known teacher who now lives in Miami, celebrated a family reunion here along the beach. This week, Lefort, 73, revisited the spot.

Or almost nothing. Of Port-Salut’s 19 registered hotels, two survived Matthew’s 145-mph winds and flooding, tourism officials said. But even the survivors don’t feel particularly lucky: the town remains in perpetual blackout with downed power lines and poles, the coastal road is damaged and residents are wondering how long it will be before life returns to normal.

“My team is alive, and my hotel withstood the hurricane,” Catherine Barrière, the owner of L’Auberge du Rayon Vert, said while enjoying a visit with friends at her unscathed, 35-room property. “Still, I don’t know what to do. I am emotionally drained.”

These days, with no electricity or running water, there are are no tourists.

In the month since Matthew made landfall 146 miles west of here, near the rural village of Les Anglais on Haiti’s southwestern tip, the country is still trying to assess the financial toll both to Port-Salut’s tourism economy and the country’s overall struggling tourism brand.

While most people have come to associate Haiti more with disaster than tourism, the country has been aggressively pushing tourism as a means to rebuild after its devastating Jan. 12, 2010, earthquake. It has increased the number of regular direct airline routes from the U.S., pushed for the expansion of the landing strip at Les Cayes’ airport to receive commercial flights and promoted the country’s hidden coastlines among the diaspora, and European and Canadian travelers at tourism fairs.

The result was more than 515,804 overnight stays in 2015 compared to 367,219 the year before the quake, according to the tourism ministry, and investments by international brands such as Best Western, Marriott, Hilton Garden, Spain-based NH Hotel Group and Colombia-based Decameron Hotels & Resorts.

“[Matthew] put a pause in the tourism industry because the headlines read, ‘Haiti is devastated,’” Tourism Minister Guy Didier Hyppolite said. “We had cancellations pouring in on us.”

Hyppolite said the government is still trying to assess the damage to figure out how best to help hoteliers recover, whether through a low-interest loan or grant. Hyppolite says an Inter-American Development Bank estimate of $15 million in damage for the entire storm-ravaged south is far too low, but he won’t offer his own guess.

“Nobody has put together anything that looks at the damage done to the environment, which we have to address,” Hyppolite said.

Unlike the neighboring Dominican Republic or nearby islands of the Turks and Caicos, Port-Salut didn’t boast luxury brands or ritzy all-inclusive resorts. It instead relied on its natural beauty with the ocean on one side, lush banana, coconut and breadfruit farms in rolling hills on the other side, and waterfalls nearby.

“They had a good, natural set-up,” Hyppolite said. “Now after Matthew, we’re back to the drawing board.”

Among the disconcerting revelations after the storm: most hoteliers lacked insurance.

“It was expensive,” said Boursiquot, the owner of Fortress Inn, a 15-room hotel.

Six years ago, Boursiquot and her late husband, Charles, invested about $2.5 million in transforming an incomplete shell into their dream retirement project. Things were looking up. Then Matthew struck.

“You don’t know where to start,” said Boursiquot, who estimates it would cost her about $150,000 to repair the hotel. “I would love to have it back, but financially, especially now, it’s hard to say because what we had, we invested into it.

“All of the things that we had were destroyed, carried out by the water … the dishes, the glasses,” she said. “The bar is completely gone.”

The scene is even more devastating farther up the beach at Dan’s Creek Hotel, where the storm destroyed all but two rooms, carrying even the stove and bedsheets out to sea, said hotel manager Frantzy Charles, 39.

A landmark of sorts with its multistory French Colonial architecture and mysterious disappearance of founder Daniel Evinx in 2014, Dan’s Creek had become synonymous with Port-Salut. Today, it’s a gutted out shell of its former glory, the ocean-front balconies mostly gone.

“It was a reference point for the area,” Charles said as workers around him unearthed broken furniture from beneath a pile of fallen concrete and washed up debris. The hotel, he said, employed 18 people — all of whom are now out of jobs.

“We don’t know what we’re going to do,” he said. “There is a touristic void. When people say they are coming to Port-Salut now, what are they coming to see? You may have one or two who come to bring aid, but in terms of tourism, coming to relax, that’s going to take time.”

Kebreau is part of a group of Haitian-Canadian investors working to transform the area with a high-end condominium and vacation club project. Residence le Sommet de Port Salut was just weeks away from completion when Kebreau was forced to leave one of the 36 apartments at 3 a.m. and run for the stairway and, eventually, the basement.

“The hurricane brought everything down, all of the glass, all of the windows,” said Kebreau, who also lost 128 solar panels and estimates the damage to be between $4 million and $5 million.

Today, all that’s left standing is the building’s hillside multistory steel structure. Every unit but one — No. 305, where Kebreau is now living — was destroyed.

Kebreau said he constructed the building with Haiti’s cataclysmic earthquake in mind. But while the roof — made of an aluminum frame with a light Styrofoam panel on top, wire mesh and two inch concrete mix — could withstand the ground shaking, it was no match for Matthew’s incredible wind speed that sounded like a Boeing preparing to take off as it tried to suck out the walls and furniture.

A Port-au-Prince native, Kebreau said he chose Port-Salut after falling in love with it on a visit from Canada where he lived.

“The beauty of the mountains overlooking the ocean all around me, more than 180 degrees, that gives you a sense of peace in the morning when you wake up,” he said.

He’s been cleaning up Matthew’s mess for a month now, and estimates that he’ll finish by January. Maybe by February, he said, he and his partners can start rebuilding. Then again, maybe not.

“Port-Salut will probably need a minimum of three to four years to recover,” Kebreau said. “Nobody is interested in coming to see us now, the way we are. There is nothing to see, even the beach has been damaged.”

Chérestal, who served as prime minister from 2001 to 2002 under former President Jean-Bertrand Aristide, also a Port-Salut native, said he believes the area’s tourism could bounce back. But it will require vision, engagement and the participation of residents, said the man who once paid locals to stand guard over the flamboyant trees and coconut palms he planted along the beach to keep animals from destroying them.

Port-Salut can’t do it alone, he said. “We are going to need help from a serious government, a government with a vision. It will require energy and experience.”

Looking out at the ocean and at the stripped expanse of land where his beautiful tropical plants once bloomed, Chérestal tried to remember the town before the storm — and what it could be again. He remembered a conversation with a local man who had been unable to feed his children until tourism came to Port-Salut.

“His son was in medical school in Mexico,” Chérestal recalled, “thanks to the revival of the beaches in Port-Salut.”