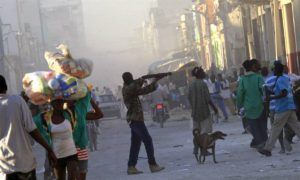 Written by Haitian-Truth.org in the midst of destroyed Port-au-Prince.

Port-au-Prince no longer exists as a functioning city. Most of its buildings now rubble piles three feet high, broadcasting the weakening cries of people entombed there. The University of Port-au-Prince collapsed, entombing the dead and injured, some  437 students, 28 teachers, 6 office staffer and three janitors

Petit Goave stands destroyed, as are most other centers of population. In Grand-Goave all but one building were destroyed, leaving it as a solitary tombstone to that centers society. Countless peasant families face the realities in isolated terror.  Grave injuries endured with no hope of medical aid….no hope of any assistance, no Hope at all. They will die anonymously, noted only be their immediate families and neighbors.

In a sad, naïve quest for that elusive ghost Democracy, the fraudulent 2006 presidential elections saw Haiti’s  future placed in Preval’s cynical, uncaring hands. The International Community may support him, yet  again in the misplaced belief that, for better or worse, Preval is Haiti’s only hope. In 2006, MINUSTAH members, Brazil and Chile– without the pre-knowledge of Canada, France, or the United States – forced a situation in which Preval’s 23 % of the first found voting, was expanded to 51%, avoiding a run-off in which an opponent would have won. A fait accompli  that effectively doomed this small country.

With a complete and total disregard for their Nation’s, or their people’s welfare, Preval, Elizabeth Delatour, Leslie Voltaire, Jacques Alexis and the Groupe Bourdon raped their society, stealing most of the relief supplies, and cash from the horrendous 2008 hurricane season, leaving a demolished society, as it was, in the moments after this catastrophe. Gonaives stands frozen in time along with other population centers. $197,000,000 in cash disappeared into the Preval gang’s accounts. An inquiry, under ex-Prime Minister Pierre-Louis was conveniently side-tracked. They have stolen more and more, with the latest coup accomplished with the sale of TELECO to VIETTEL…. negotiated with a $10,000,000 under the table payment to Preval.

Preval plans to buy the February elections, followed by the presidential ballot later in the year. A  poker-player with unlimited stakes, and a stacked deck, against opponents with pennies.

The International Community is responsible for Haiti’s situation. They are responsible for the Preval government and its callous criminality. However, cannot blame them for hurricanes or earth quakes.

Hurricanes are not democratic in their approach. Days, sometimes weeks stretch out before their arrival. They are given names and develop a personality as they follow their path….Ike, Hanna, Ivan… The warning period allows those with the resources to prepare for the onslaught. Those without must huddle down where they are, unprotected and forgotten by  the mid and upper levels of society.

Earthquakes are more democratic in their approach. There is no warning as they strike like an assassin at any moment of the day or night. They have no name but the quake of  1643, unlike that, January 12, 2010 has been given one . The Haitians call this catastrophe PREVAL.

The named, the nameless. Men, women, children, young and old, rich and poor.

Thousands, perhaps tens of thousands were dead in the short life of PREVAL.  PREVAL, a rumbling, shaking quake, a malevolent monster with a life of its own, snatching the souls of thousands to fuel its greedy anger. PREVAL buried thousands more in a sadistic desire to see his people entombed alive to wait for death, alone, frightened and forgotten by all except their families and friends who attacked debris with bare hands in futile attempts to free loved ones. Some families were mercifully killed in total, while others were fragmented, separated by life and death, survivors to grieve their losses  as food and pharmacy outlets closed, creating a foundation for a violent social explosion that must follow.

After the quake, President Preval had gone on the radio to say that he was happy to be alive, but could not contact world leaders because the phone system was down. A stupid lie, to a frightened, traumatized nation, by a criminally cynical leader  who cared absolutely nothing for the suffering of his 9,000,000 citizens. This communications failure did not prevent his contacting the Interior Minister to order an unbelievable, callous, cynical and criminal act.

In the moments after the quake settled into its unsettled, rumbling, frightening aftermath, Preval’s sick mind (perhaps that of Elisabeth Delatour) – conceived a diabolical and murderous concept. He called Interior Minister and told him to contact key  high-level PNH staff.  Preval’s orders were to spread the rumor of an approaching Tsunami. “Part of the nation was already under water and the massive wave that was sweeping towards Haiti would drown Port-au-Prince, reaching Petion-Ville up the mountain above the devastated capital.”

A frightened, traumatized society fled the low areas, streaming up the mountainside in a desperate attempt to escape .

And he did this to justify release of 4,000 prisoners from the National Prison. Most of these are harmless but about 1,000 are key gang members, loyal to Preval who is Godfather to Haiti’s gangs. They are his shadow police force. Among those released are 60 key gang leaders.

As a side bonus, the gangs were allowed to loot downtown Port-au-Prince, now deserted as the population fled from Preval’s created demon.

These gang leader went straight to Bel Aire and Cite Soleir where they started organizing problems for the Haitian society. First on the agenda was a settling of scores. Several men were lynched and burned. 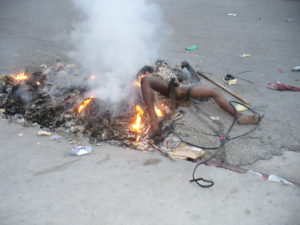 Preval cares nothing for the Nation, or the people.   The Mob understands this and is ready to explode, perhaps creating a backlash that sweeps Preval before another type of irresistible Tsunami.

Francois Duvalier and Aristide can reproached for many things, but each of these men would be out on the streets with their people. These men loved their people and the Nation knows this.

He should have no place to hide.