There is an old proverb: The pot calling the kettle black. A sort of parallel to the Biblical saying – “Let he who hath no sin cast the first stone.”

The opposition is now accusing Martelly/Lamothe of drug dealing. This is something that will capture some headlines, and generate a tempest in the proverbial teapot.

Unfortunately, Michel Martelly has some problematic members of his wife’s family, including Sophia herself.

Sophia is simply overwhelmingly greedy. Her brother Kiko is the target of a high-level DEA action that recently saw one of his associates, a senior PNH officer in Leogane, lifted and flown to Miami. The PNH guy is warbling like a canary in an effort to get a reduction of a potential 27 year sentence.

Kiko’s recent attack on Prime Minister Lamothe, an attack the is carried today by the Opposition, was really a dumb, suicidal  move, on his part.

The only thing that has prevented Kiko’s arrest if the fact his brother-in-law is president. If Martelly goes, Kiko will be taken into custody with the speed of light.

The opposition accusation of drug involvement overlooks their own base which actually generate a situation in which Haiti became a true NARCO STATE, unlike any other in the world.

The International Community must wake up an recognize the Opposition activities are simply an effort to protect the drug business. With Lamothe in power, they are threatened.  This is not a combat of political philosophies – the Opposition has no philosophy or suggestions – It is a combat between Democracy and Greed, two easily understandable goals.

The cocaine business is a huge, well-organized and financed, business endeavor in which the American authorities stop about 3% of the flow. They are about as successful with drugs as they are with illegal immigrants surging across the Mexican border.

Haiti is an important base for the Cocaine Traffic. The drug dealers see a Lamothe presidency as a threat to their business. Better to stop him now by fubnding the opposition.

If there is one thing Lamothe cannot be accused of it is drug dealing, at any level.

Aristide was, perhaps still is King of Kocaine and uses the fortune he amassed to destabilize the Martelly/Lamothe government in a cynical grab for renewed power. In Haiti, money is the power and Aristide is spreading a lot of $$$ throughout the opposition in Haiti, and contacts throughout the International Community.

ARISTIDE IS THE OPPOSITION – NO VISIBLE – BUT WIELDING CONTROL BEHIND THE SCENES.

The Aristide/Preval presidencies saw drug runners, murderers, kidnappers free to act. The governments took a hands on approach to the elimination of opponents – killing hundreds. Some of these were Necklaced by Aristide’s fanatics.

Unfortunately, much of Haiti’s “knee jerk reactions” are generated by the media propaganda flows, paid for by those who wish to influence things. There is no Free Press in Haiti. You get what you pay for and a lot of money is paid to media personalities in this game.

If the Nation wants a return to the dangerous, criminal non-productive type of governments, generated by Aristide/Preval, then we should follow the pressures of VISION 2000, and other, demanding the removal of Laurent Lamothe as Prime Minister. These commentators are the true criminals.

If we hope for a Democratic, constructive, safe future for the Nation, and our children, their childrens’ children… we should not upset the apple cart. President Martelly must complete his term.

Prime Minister Lamothe must be allowed an opportunity to continue his work for the well-being of our Nation. 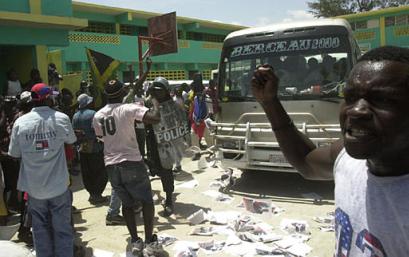