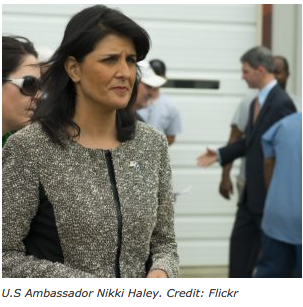 UNITED NATIONS (AP) — U.S. Ambassador Nikki Haley said Tuesday, April 11, that U.N. peacekeeping has made “a great contribution” to Haiti and the Security Council’s expected vote to withdraw all troops from the Caribbean nation by mid-October is an example of how peacekeeping missions should change as a country’s political situation changes.

The United States is currently reviewing the UN’s 16 far-flung peacekeeping operations to assess costs and effectiveness and Haley told the Security Council that, thanks to recent elections in Haiti, “the political context is right” for a new and smaller mission.

She strongly backed the transformation of Haiti’s UN mission from military patrols to focusing on developing the country’s police force, supporting the rule of law and protecting human rights.

The Security Council is scheduled to vote Thursday on a resolution to withdraw the 2,370 military personnel by Oct. 15.

Sandra Honore, the UN envoy for Haiti, told the council that as a result of successful presidential and legislative elections on Nov. 20 and Jan. 29, “Haiti’s political outlook for 2017 and beyond has significantly improved.”

She said this has opened “a crucial window of opportunity to address the root causes of the political crisis” that preceded the elections and address “the many pressing challenges facing the country.”

She said international support, including from the United Nations, will be needed to enable the national police “to eventually provide security for all Haitian citizens.”

Honore said she has called on the government to make further professionalization of the police and the preservation of its “apolitical character” a priority. The new government must also improve the administration of justice and human rights “to truly anchor the rule of law,” she said.

This is essential, Honore said, to make policing more effective and create conditions for foreign and domestic investment and job creation.

Her statements show a frightening lack of knowledge, with regard to the Haitian situation.

Just when Haiti really needs support, to guarantee survival of our new government, the support is withdrawn.

The PNH is fragmented and headed by a Lavalas loyalist.

MINUSTAH has done little. It did give us cholera and lots of guys who took sexual advantage of young girls and boys.

Watch for some UN manufactured event to justify its continued presence in Haiti.