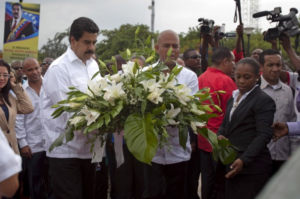 PORT-AU-PRINCE, Haiti — Venezuelan President Nicolas Maduro made his first official visit to Haiti on Tuesday as the countries began negotiations to figure out ways to renew a special fund that uses oil money on mostly infrastructure projects.

Maduro and Haitian President Michel Martelly met privately for several hours on the grounds of where the National Palace stood before it collapsed in the 2010 earthquake.

Venezuela is one of the biggest donors to help impoverished Haiti rebuild from the catastrophic 2010 earthquake.

Much of that support comes from Venezuela’s PetroCaribe fund, a pact created in 2005 that gives suppliers below-market financing for oil. It has an interest rate of only 1 percent to 2 percent with a two-year grace period, and the funds are welcome by Haiti because they are under the control of the central government.

Under the agreement, Haiti has used millions of dollars from PetroCaribe to pay for fuel, renovate power stations, and develop social programs. The money was also used to repave a runway at the international airport in Haiti’s second largest city; the facility was renamed for Venezuela’s late President Hugo Chavez.

Ninety four percent of the current infrastructure, agriculture and education projects are being done in Haiti are being done through the PetroCaribe fund, Martelly told reporters at a press event that began five hours late. The leaders didn’t take questions.

That same month, Maduro was supposed to travel to Port-au-Prince for a regional summit hosted by Martelly but cancelled. The event brought together more than a dozen heads of state.

In the first visit by a Venezuelan head-of-state since Chavez came in 2007, Madura spent the day with Martelly, the two wearing white guayaberas and accompanied by their wives. Before reaching the presidential grounds, they toured a national museum and viewed a statue in a public plaza in downtown Port-au-Prince