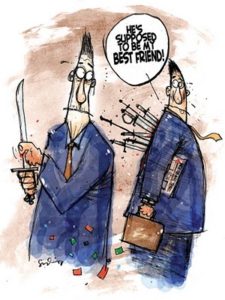 We have seen another week of problems created by Martelly’s inner circle, led by Sophia and the Mayard-Pauls. While President Michel Martelly still endeavors to keep his promises, to his people, Sophia Martelly focuses upon her ongoing effort to control everything not tied down, be it bags of $$ or puddles of power. Supporting her in the immoral, and often criminal activities are the Mayard-Pauls who do whatever they can to ensure a continuous flow of cash from the Haitian economy.

One would think that international censure, because of the court actions for her alleged criminal activities, since her husband took office, would slow her down but NO – she is too greedy and dumb to understand the realities of life, assisted by the mental giants, Gregory and Thierry Mayard Paul who work to control all sectors with cash – such as ONA – or contractual coordination with foreign business projects.

This week saw Sophia Martelly focused upon an effort to control the proposed new cabinet, with people of her choice. Competence means nothing. She just wants control. Her earlier efforts to replace Laurent Lamothe with the incompetent, malleable Sophia puppet, Valerie Milfort was just a preliminary move in the ongoing game of chess. (And now Sophia and Milfort have a big personal conflict.)

At one point, she was pressing for Alex Celestin, head of APN, for Ministry of Interior. He is close to Magali Racine and is considered as one easily controlled and ready to deliver the cash.

Sophia Martelly is not a part of the government!!!

She has no constitutional functions, other than to exist as the First Lady!  Sophia should be satisfied with the fortune she has already plundered, from the Haitian people. Let’s leave a few dollars to buy rice and beans for poor children who have no other hope. Let’s leave something to support Michel’s promise of an education, for all Haiti’s kids.

Leave Prime Minister Laurent Lamothe alone and allow him to get on with coordinating our business, he is the first real Prime Minister we have had since Duvalier’s departure in 1986.

4 thoughts on “MARTELLY STILL BELIEVES PWOMIS SE DET BUT INNER CIRCLE STABS HIM AND LAMOTHE IN BACK… SOPHIA, THIERRY, GREGORY INTERESTED ONLY IN POWER AND GREED – SCREW THE HAITIAN PEOPLE!!!”